A broadly inclusive view at the public perception of heavy metal and its fans which, although limited to mainstream music, captures the unstable origins of modern metal, this book provides a solid foundation for Weinstein’s comments on metal.

Are You Morbid?
by Tom G. Warrior
360 pages. Sanctuary Publishing. $

Although somewhat scattered in focus due to its intense immersion in the personality of the writer and the human emotions of its band, this book establishes the intent of Celtic Frost and its predecessor, Hellhammer, and explains the philosophies of unified concept and music as a presentation of the ideology and desires of an artist (stranded in a mortal body). While conversational in text and often tedious, this retelling answers many fundamental Hessian questions.

A somewhat distanced view of metal as rock music, this book brushes over many of metal’s strengths en route to a discussion of its commonality with popular music.

A reasonable summary of most academic study so far, which indulges heavy metal as an extreme offshoot of rock in which rebellion is the prime goal and the fundamental ceremony is the concert. These failings aside, there is very perceptive research here on the origins of heavy metal and the personalities within its culture. The latter is most informative of all aspects in this book and is Weinstein’s strength as a writer.

Short reviews talking about the emotions and social significance of heavy metal bands are Popoff’s strength, and he through a fragmented view into hundreds of bands reveals a culture in transition. Including a reasonable small selection of underground metal.

For those who want to enter the intricate world of collecting, an experienced metal journalist outlines the significance and comparative value of classic metal releases of interest to collectors. m Dunn takes to the air to visit different parts of the world where heavy metal is booming. In doing so, he acknowledges the transition the genre has made from being a developing movement in the west, to a genre which has reached an end to its maturation and now is another voice into which others project. Indeed, as he visits anti-religious metalheads, religious metalheads, anti-Zionist metalheads and Zionist metalheads, teen rebels and people looking for a voice for their ancestral cultures that can compete with the booming sound of the West, Dunn discovers a change in metal. No longer is it being absorbed by a global audience, but changed by a global audience. He does this through a winding narrative featuring many shots of the director, often using his bemused poker face to poke innocently where trouble might lie. Knowing that interviews alone make a boring documentary, he intersperses them with tour de force cinematography that shows us the vastness and beauty of these different places, and music videos mostly featuring concert shots from each location. The intelligent choice here is to avoid “norming” places by emphasizing the we’re-all-the-same message. Dunn lets his camera and his subjects do the talking, although his frequent voice-over covers the boilerplate dogma we’re accustomed to hearing: metal is about self-expression, freedom, free speech, being an individual, and so on. But as time goes on, we see how metal is about being in a group that accepts the individual’s desire for rage and figuring things out themselves. Dunn’s final narrative affirms this: metal is a worldwide subculture to which people belong more than the politics of their nations. It is as if through his eyes, metal is a shout of rage at the modern world which has assimilated culture in its manic desire for power and commerce, and the insurgent forces of Hessians worldwide are reclaiming culture by first distancing themselves from it. For the person who is rightfully as cynical of the nitwit pretensions of individuals as of the face of state power, many of the people interviewed come across as surface treatments, and this is a general criticism of Dunn’s films we have all heard before. In the name of making them accessible, he pushes back the anthropology in favor of reveling in the power of the movement itself. For now, that’s not half bad. discussed in Dark Planet – straightedge, skinhead, black metal and zealot – present themselves as alternatives to the mainstream ways we envision our future. Unlike the normal Simpsons-style happy oblivion in which most consumers live, these youth culture groups believe our current path leads to ruin, and are forming breakaway societies. Luckily, the film takes a documentarian’s delicate outsider approach to outsiderness: observe, ask the logical questions, and then boogie. Here is the great strength of their approach: they are able to approach these cultures as an athropologist would, without judging or fearing for their own political futures, because they treat them all so evenhandedly. If you ask this reviewer, the zealots — separatist Christian ideologues — really run away with the show by having a clear plan unlike the other three groups. Their culture, based in distorted loud music as well as the other three, emphasizes a rising above instead of a fighting back or burning the world. Like the other groups, however, their methods do not seem particularly effective. Seeing these movements compared helps us see the point of this film: that many people agree things are going wrong, but have no idea what to do about it because the insider mainstream is never going to budge from its position of convenience-first, so people are creating alternate societies within societies. This film like all good documentaries provides a visual feast of information with an aftertaste of introspection. 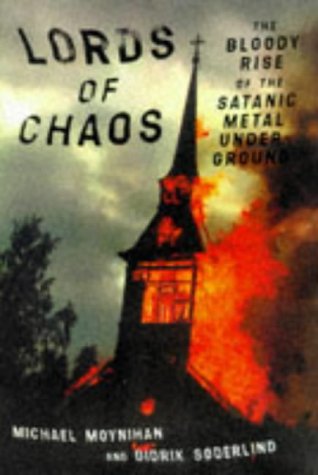 Although somewhat uneven, this book chronicles the events in Norway as black metal rose and intelligently presents the ideological viewpoints behind the actions of these musicians, as well as giving insight to the mechanations of bands and personalities in the turbulent world of underground metal.