We can divide the overture into 3 themes, after the third of which follows a descend into the darkness of the world, to establish mood for the drama.

The theme of magic, which has strongly influenced Howard Shore’s Lord of the Rings, the motif of the ring specifically, this theme encapsulates mystery and ritualism associated with the subject of the story. Without a doubt, this is the motif that might be of most interest to metalheads, by virtue of being a mixture of light and darkness, formed by the contrast of major and minor.

The theme features syncopation, a technique which is creating volatility, remoteness of place and a suspension of time that will soon culminate in the theme of Faith.

The lead voice (trumpet) follows a major triad of C E flat and F that falls into the minor key at G flat. This resembles Anfortas’ pain and suffering. Thus, the C D natural E sequence on the 3rd bar responds to the previous sequence in A flat and serves like a correlative conjuction in the whole sentence.

Then pause and the theme returns, conveying a sense of wilderness, of losing one’s way through unresolved cadences in a quest, searching for something. 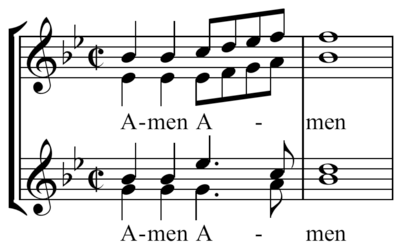 In contrast with the previous theme, this one evokes light by being stark and consonant.

The Holy Grail theme appears – found in the Dresden Amen, composed by Johann Gottlieb Neumann – probably in the way that Immortal copy paste Bathory. This theme has been popular in church choirs in Saxony. In Dresden, the place of origin of this sequence, Wagner had been a Kapellmeister, thus he was obviously familiar with its use. It’s like the riff of “Two Minutes to Midnight”; it has been copied by every composer. It has been used by Mahler and Bruckner, it has been used even in Ben Hur. See video below, the comparison of Felix Mendelssohn’s opening of the first movement of his fifth symphony and Parsifal:

The use of this motif is like a bridge, it connects Liebesmahlthema and Glaubensthema because:
1. It resembles Liebesmahlthema, by being in the same key and by featuring notes ascending on the scale.
2. It resembles Glaubensthema, by starting with E as the lead note, not including accidentals.
3. It has a personality of its own by having chords proceeding in an open manner and by sounding more consonant than the previous theme.

Faith in A-flat, starting on C – then silence.

Faith transported in F-flat, a fifth above – then silence again. A long sigh and exhale, following the rhythm of human breathing. The essence of being spiritual, is not to follow a dogma, but to struggle towards the top.

When religion becomes artificial, art has a duty to rescue it. Art can show that the symbols which religions would have us believe literally true are actually figurative. Art can idealize those symbols, and so reveal the profound truths they contain ~ R. Wagner

Faith transposed again one fifth upward, the spacious rhythm, everything slows down and ends in a chord of tragedy. Will the quest for the holy grail be fulfilled?

Yes. The theme of the Holy Grail appears for a brief moment of communion.

Then the theme of Faith lightly returns and then slowly all instruments join for what the writer subjectively believes to be the greatest moment in the history of music. The prolonged silence builds up for a torrential crescendo, as we are swept through a series of transpositions that seem never ending, suspending time and conveying a sense of eternity. The myriads of celestial voices assail the listener, the rhythm itself, is expanding to include the whole, an infinite love.

The secret lies in the ouroboric and harmonious way (based on the circle of fifths) in which the transpositions are performed, the theme consumes itself and gives birth to itself in saecula saeculorum.

Silence, the introductory theme returns in a more light mood where the cadences manage to sound major, the theme progresses towards the low notes, yet it remains hazy by lack of obvious tonal center, abandoning the diatonic and slowly immersing the listener deeper in the chromatic atmosphere of conflicting moods, which was Wagner’s aim with this opera. In his own words, the music would resemble:

and the play is ready to start. Probably the most mature, lean and reserved creation of Wagner.

Fun fact, this opera is a symbol of the breaking of the friendship between Wagner and Nietzsche, through what Nietzsche interpreted as the decadent and Christian message of Parsifal. On the other hand, as mentioned in the quotes above, Nietzsche acknowledged the power of the poison of this music owed to its sublime beauty. Also, Wagner had some unconventional views on religion, and possibly this work is a parable of a noble warrior’s initiation. But this can be a subject of another article.

A final word to aspiring musicians: if you want to rise above, don’t be afraid to change key, use abrupt silences and premature crescendos. This will make your songs more interesting, since metal and romantic music tend to exhibit modulations to remote keys which are far from the tonic. Modulation will also grant you compositional freedom, rather than sodomizing poor E5 for 5 minutes. Just bear in mind that modulations should always serve the piece. Sadly, most metal today is a mimicry of the past or of the dissonant/post present. Just break the competition and write something meaningful, based on three or four not so different moods/riffs, such as quest and mystery, awe and reverence; imitate classical.

After all, if Wagner was alive today, he would be playing in a metal band.