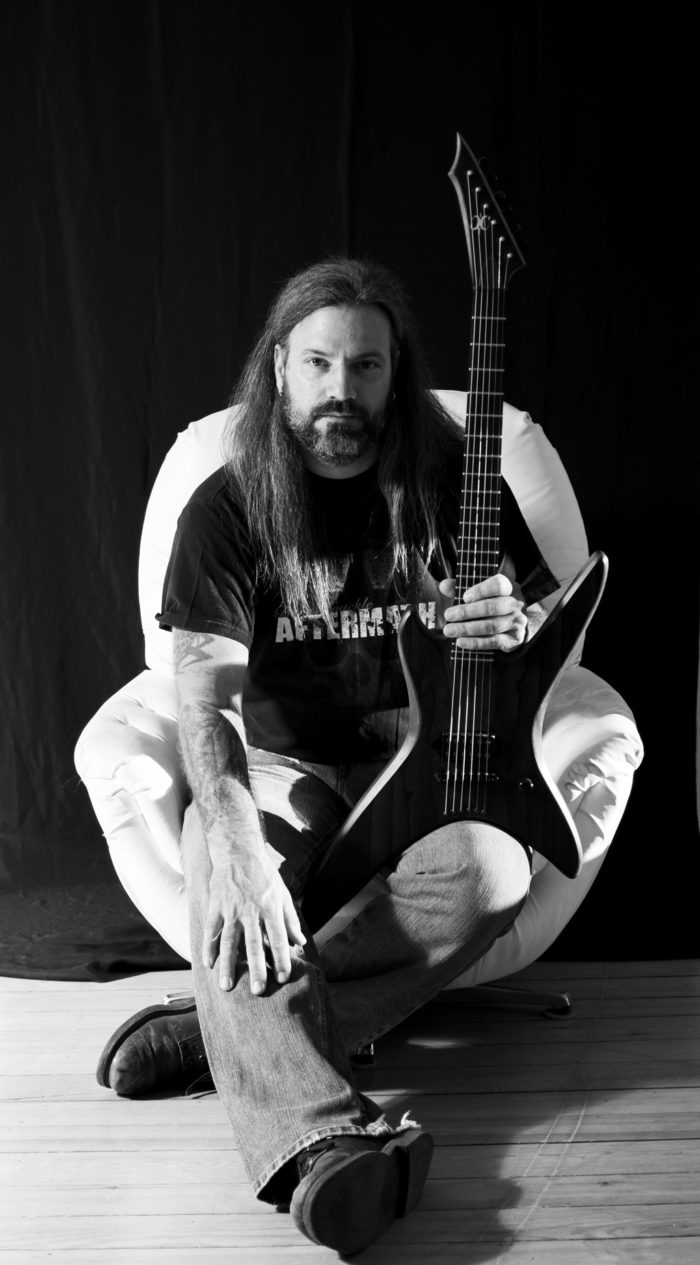 (editor’s note:  I’ve been made aware that the below tab is not working properly on some phones/PC.  Tab is also available here)

Let’s have a look at the guitar tablature for the first riff of “Condemned to Obscurity” here:

Now to preface the following dissection of the material:  I am not a schooled musician, but have been playing guitar for twenty years so I will attempt to describe what’s going on here with limited jargon and only utilizing the knowledge gained from a lifetime of listening to metal and developing my ear and skills to allow the common metal reader (who no doubt has picked up a guitar in his/her lifetime) to more easily understand the details.  So onward we go.

This is the first riff you hear fading in after a piano intro.  The initial three chords of the phrase actually are the end of the actual riff, but present themselves at the end of a drum fade-in that is actually playing the first bars of the song without musical accompaniment.  This provides the first sense of bewildering the listener in what is to become a fully esoteric riff- if you are unclear on where the passage actually starts, it is an uphill battle to fully comprehend the music.  The actual riff starts after the break you see after those first three chords, but before we get to that, let’s talk about those three.

The most common intervals (two notes played together) you hear in death metal are fourths and fifths.  I won’t break down what that means exactly since it is irrelevant to this discussion, but if you see a guitarist visually playing two notes with one flat finger, that is a fourth, and also the interval you see in these first three chords.  The 4th interval is a percussive, dull sound of succinct finality, and is most often successful when contrasted with a melody of some kind in the same riff, which provides a life/death dichotomy that gives character to what otherwise could be a dull passage.  A 5th interval is the power chord- something you all know from punk and forward into all forms of extreme music.  Despite the fact that a 4th and a 5th are actually comprised of the same notes (but one sharing a different octave), the 5th in comparison with the 4th is vibrant, powerful and gives the feeling of forward momentum.  Death metal is most successful using these two strongest tonal techniques, and if a riff consists of 4ths and 5ths, provided that you have a strong melodic backing you will have a forceful, declarative riff to back your arrangements with.

Knowing this, the band utilizes the initial 4th chords to contrast a harmonizing single-note melody immediately afterward, providing that death and life contrast that makes for strong storytelling in song.  What follows those initial three dull thuds is a riff that is four bars of six note arrangements (any note you see that reads ()h() is actually a quick hammer-on or a slurring of two tones), and although it is a perplexing melody, the construction utilizes the building blocks of death metal to maintain the intensity needed to drive the song forward.  Almost all of the notes between the two guitars are actually the two notes of a 5th harmony (the power chord) but split between the two players.  This harmony is very common in death metal and is abused particularly throughout the Death and Nile catalogs, but here it is necessary to render a deliberately obscure melody palatable.  When a 5th harmony isn’t occurring, the guitars are either perfect octaves of each other (same note but different pitches) or one note away from the 5th, so tonally the two guitars rarely leap out of register into counterpoint terrain and provide a striking, declarative unison where a more exotic harmony would eschew the concrete aspects of the melody.  There is only one note of the melody that is harmonized in an odd way- the fifth note of the 2nd grouping of 6, which is harmonized with one note above its own octave.  This is an important detail because that interval, known as the minor second, is the most jarring in all of music due to it essentially showing two root notes at war with each other over the same musical space.  Gorguts uses this interval one time here, and it is so quick that it is almost undetectable with regards to the entire phrase, but it allows for a small bit of unnerving tension in an otherwise very straightforward harmony.  This may be the first use of the minor second in the band’s catalog, and is important due to the fact that the band in its current incarnation uses this interval almost exclusively to provide dissonance.

Now, let’s look at what is happening to the notes themselves in the riff.  The melody is comprised of essentially two melodic lines each twelve notes long, and the latter half is the entire phrase played one fret lower than where it started.  This means that as the riff repeats, it stays rooted in one note which moves downward in pitch one tone and then upward in pitch one tone repeatedly.  This is the chromatic relationship that defines a majority of successful death metal, and despite being displayed in a melody that is alien sounding, showcases a knowledge of the tonal rebellion that chromatic music provides and the dramatic intricacies that go along with it (i.e. the theme from Jaws).  As the riff progresses, the bassline although not shown here is clearly playing long, held out power chords in a rhythm that appears to be (X for the chord, O  for each pause as the chord is held):

X O O X X O X X X O O, then X on the upbeat in between where the last two beats of the phrase.  This provides the most bewildering element of the phrase in that it dictates a rhythm completely independent of the guitar line.  It is dizzying to follow yet still manages to compliment the riff in utilizing the tried and true death metal technique of the 5th harmony through the entire phrase.  The riff concludes after 4 full phrases with the initial three 4th chords of the song resurfacing to bookend the melody in percussive, palm-muted finality.

So, despite aesthetically sounding strange, Gorguts has developed a truly death metal intro in that is it comprised of 4th and 5th note intervals, palm-muted chords, and chromaticism almost exclusively.  This is unlike anything the band does now-  if I were to provide a guitar tab of a contemporary Gorguts song, most harmonized guitars would be of the aforementioned minor second interval, which rarely occurs in death metal due to its tonal ambivalence in comparison to the strength found in 4ths or 5ths.  Any melodies in current Gorguts wouldn’t be singularly independent as shown here but instead would rely on each other to provide a tapestry of abstract dissonance in lieu of the storytelling that declarative melodies provide.  Instead of staying relatively within the same tonal register as shown here, current Gorguts relies on extremely low/extremely high pitch contrasts to jar the listener instead of letting a more direct relationship of notes carry a song.  All of this spells the quandary that Gorguts is in now: meandering riff structuring where they once were able to impact the listener with direct yet still challenging melodies.

Despite the artistic achievement that Obscura is, this analysis makes me wonder what would have happened if Luc Lemay had not collaborated with Steeve Hurdle and instead continued along the path that a song like “Condemned to Obscurity” hinted at all those years ago.  Should Luc look inward at what he had composed for The Erosion of Sanity, perhaps he could regain a knowledge of the immediacy that the building blocks of death metal structuring can provide, and pull the band out of the slump of musical unassuredness that has unfortunately been plaguing Gorguts for years.