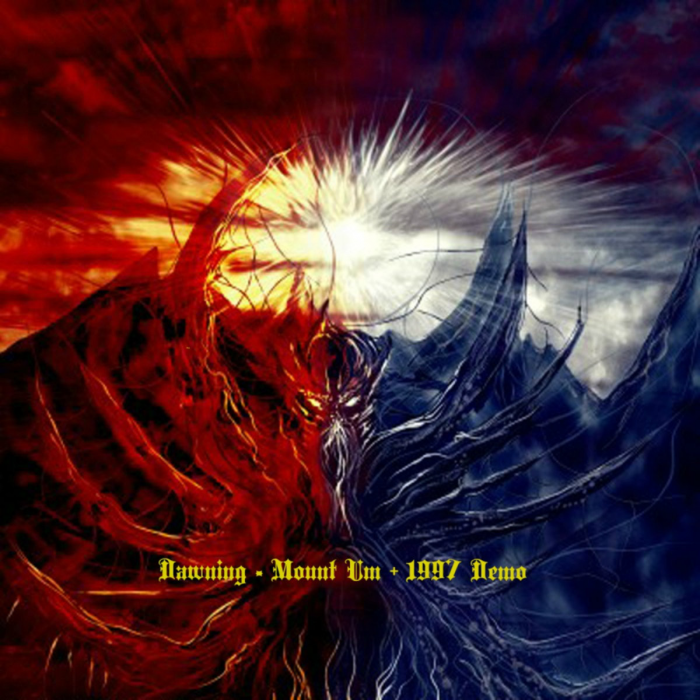 Throughout this song we see an increase of emotion. Thus, to make it as natural as possible, a grand space of time is allowed for the ideas to grow with tiny differentials in entropy, namely, accidentals. Thus, the song lasts for over 15 minutes and revolves around certain patterns, which are melodic ideas that bear similarities and for the sake of convenience we shall assign a (possibly subjective) emotion/name to them:

Similar to Mussorgsky’s leitmotif Promenade, we see theme A gradually changing slightly, as it becomes molested by B, while B in turn becomes even more chromatic and perverse as the song progresses, pushing personal tragedy to the limit and evoking pure nadir. Life entails suffering; in this idea is the core value of doom. Suffering gives meaning and as the clouds pass, reveals a sense of awe and understanding – this is the soul of blackness and death.

In the vein of funeral doom bands, “Pilgrimage to Umunhum” begins with a synth melody much like the ones that Immortal and Ildjarn use when they attempt to paint mountainous sceneries. See Landscapes and Mountains of Might. The austere keyboards move from D to C on the bass while the lead is centered around a helix of 3rd intervals around the bass that exhale melancholy. Generally this I – VII harmonic progression with a melancholic lead melody is an easy and inexhaustible way of song writing, from Iron Maiden to Linkin Park.

The sound I have always aimed for with Dawning is to take a synthed out movie soundtrack and cross it with raw doom or black metal guitars and vocals. With a hint of ambient (backwards vocals, chimes, timpani drums) – Steve Cefala

This soon evolves into a slow tempo tremolo picking torrent reminiscent of Greek black metal in tone (Thou Art Lord) and is tied to the keyboard theme by being almost identical to it.

Suddenly, it jumps from the key of D-flat to the key of F. This move was apparently rushed, but it makes perfect sense if you can use the circle of fifths. The key and tempo change creates a feeling of urgency, of danger, yet it does not defy traditional harmony.

Then the starting theme returns on the key of F only to be stripped stripped of its black metal elements, leaving a goth-rock rhythm behind, achievable by keeping the melody the same.
The keyboard melody returns, now complete and accompanied by distortion.

Taking advantage of the pause, a frenetic melody reminiscent of the one before starts with a key change from F to C major Hungarian scale. Keyboards with a slightly different and more industrialized tone play single notes centered above the guitar alternate picked riff. Then we move to D harmonic minor. Chromaticism is slowly taking over through the increasing amount of half step intervals and serialist logic is creeping in. Another way to view it perhaps could be as mini transpositions of small riffs, like small dialogues. Things here are slightly normal, still. But after those accidentals, tritones start to dominate. And the evil part begins anew. But this time it ends with doom. A traditional doom riff with a hint of the pentatonic scale, centered on the, now natural, chords of G5 and E5.

The deceleration opens the way for an acoustic part, while the keyboards breed familiarity by playing wicked melodies based on A. Then an increasingly chromatic version of the previous riff which is based on B returns, bounces on a doom riff and comes back to give way to a flange effect.

The flange effect is a clever trick that acts like silence. It hides various instruments forming disharmonic cacophonies. It also simulates altitude and lack of oxygen. Like silence, now the song can go anywhere.
From this nebula of possibilities, a roaring Roland JV keyboard emerges to scale the summit. Then a pause happens. And the scenery changes.

In the end the keyboard riff A of the introduction returns, slightly altered, but now, as full chromaticism has paved the way, the classic black metal stormy rhythm accompanies the music. Nothing new has been learned. All that was suspected was experienced. All that was forecasted occured. And this is tragic.

This simple but quite experimental song, shows why a good metal band can kick ass through, often unconscious, mastery of key changes, silence and tempo. Although they are distinct genres, metal and classical share the same spirit – or should we say ‘structural reasoning’ instead?

On the other hand, we cannot put this music on a genre spectrum. Doom/death is a silly title. Dark metal is vague and unexpected. Dawning is one of those rare bands that have paid no respect to man-made borders of expression but have only respected the spirit of metal. And this is a rarity.

Overall, this music has parallels to landscape wanderings: songs wander around but not further than one can hike to. They don’t need to stray far to be interesting and revolve around a few main themes, yet like a mountain that looks different depending on your perspective and distance to it, such is the music of Dawning, as well as bands like Summoning, who are passionate and serious about what they do. One carries his problems and ends up in a stoic conclusion on Umunhum, leaving the everyday behind, imagining things, ending up lost on a decaying radar base. You can read Brett Stevens’ Dawning interview here:

And you can enjoy Dawning’s music here: