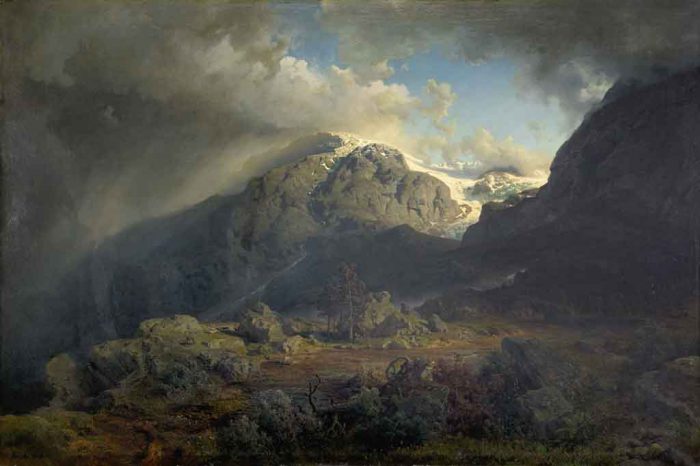 This is who we are, Promethean creatures made of blood and wielding iron.

The gods are stories. Yet not mere stories, but living and breathing ones, that we all share, we all carry; the gods live inside us alongside the other stories we tell to instill beauty and meaning and explain the unexplained in terms that convey a thousand words, providing understanding on all levels.

With iron we have risen above the animals.

See how the working of metals is a miraculous alchemical process of balance and beauty! Oh, how modern science has refuted the poetic and symbolic meaning of our material processes, yet, it is up to us to find out and be enchanted by filotis and neikos or love and strife, two fundamental forces of the universe from Empedocles to Planck; attraction and repulsion. The interplay between those most fundamental of opposites creates life on the most abstract level. Our very own metabolism is an interplay of this duality as electrons are transferred and bio molecules merge or break down to unleash their energy. But the work we must achieve, in a spiritual sense, also has to do with the metallurgical process and is reflected in the ‘metal’-lurgical process of songwriting.

Behold the secret of steel! Take the ore from the depths of the earth, melt and cast it into shape, cut it, forge it and heat treat it. During heat-treatment, steel must be normalized, meaning that its temperature should rise to over a thousand degrees to relieve the stresses caused by the previous processes which might make the steel tough but not strong. Thus, steel must be hardened now, which means raising its temperature again to reach certain levels of solid solution strength and then quenching it to avoid unnecessary phase transformations. Then we must rise the temperature again to temper the steel to give it a final balance of strength and toughness.

This is the secret of steel. Should we use the above scientific information not as ‘science’, in defiance to university textbooks, but more like the hermeticists of old, we shall find a key. Because it is all about love and strife.

Metal songs are written in a similar way.

The joyful, hopeful and glorious middle part of the song gives way to the melancholy of the acoustic riff of the introduction, which gives way to determination. And determination increases like the grain structure of heated steel: first of all we have an introduction, the sister of ‘Twilight…’ that stabilizes as the song progresses; the melody becomes clearer and more defined with small descending solos on the lower strings – which sound like the Neaderthal version of Yngwie Malmsteen envisioned by Varg and his wife. Then after a pause – a repeating pattern between all of the songs thus far and a very underestimated tool in metal music generally – a totally different riff appears, heavy and joyful. Then joy is intermingled with sorrow and joy at the same tone, for the main acoustic riff returns but not alone, distortion accompanies it and underlines every note. And its transposition is entrancing.

Thus, after arpeggios in Bm, Dm appears for an aura of tension and anticipation before the main motif appears and flows smoothly by being also in Dm. Then it blends into a Bb major arpeggio to encompass the totality of emotion alongside C and F chords that help the sadder riff recycle itself anew.

The most classic riff of the album: 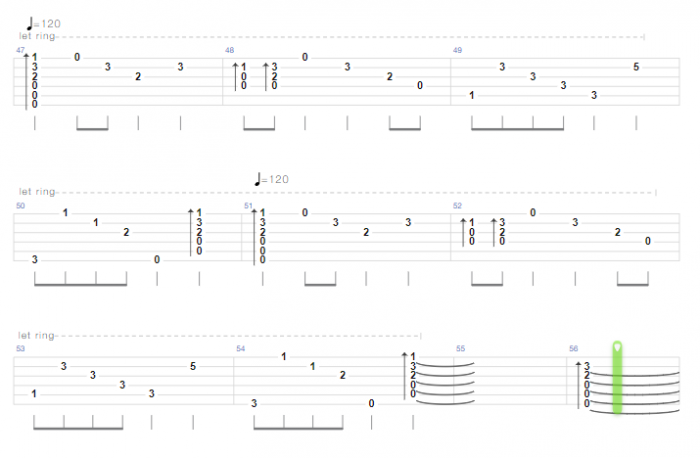 Take heed of the talent of the guitar player using dynamics in his playing throughout, going from forte to piano to pianissimo, silence and back to forte with an illusion of ‘fade-in’. This is passion. Perhaps the most understated element of metal.

Then another pause of the instruments. Notice how in the beginning of the album there was more continuity but here imagination takes over compositional technique as we are under Bathory’s spell. This increases steadily throughout the record and culminates on the strange mode collisions of the penultimate track – that is, before changing musical genre entirely. Evolution is strong in that album, both in subject and in songwriting.

Bending E note on the D5 centered doom riff, sounds like a Viking horn. The scale has changed with the aid of silence. But Quorthon like a good chess player does this change only to change scale again and transpose the previous motif to an E center, in what seems like a sonic ambush, the perfect climax, and the song hasn’t even began to form!

The violent verse in Aeolian kicks in. Much like the previous song he follows the voice of blood, that is the riff! And like Hesiod, some time ago, he tells us a story:

O, so it is written son
When all waters and land you see
All around came to birth
Man and beast was one
And the gods of the sky
Walked the face of the earth

Few free and innocent
Man strolled paths next to those
Of beasts seeing no signs
But stars in the sky
Knowing of day and night
Of rain and winds, hunger and fright
But not of death nor of life

Enter a progression centered on F#; then E and then D#

While all was at ease with all
Living creatures and beast and the gods of the sky enjoyed the lavish
riches of this world, giants rose out of their caves and took to the
skies challenging the gods for the power of the universe.

Only when the great halls of Valhalla stood aflame lighting up the
worlds all around did the gods wake up from their drunken sleep, to
speed through the heavens and clash with the giants in the greatest
battle ever seen.

Heads arms and legs of both giant and god fell down upon the earth
and… The weapons… The swords of shining metal… And those who
found them and took these shining blades in hand were only men, now
man was the master of this world.

The ah-aah-ah that he uses to finish some of the verses is another folkish divergent element within the harmonious confines of conformance to the metal themes. The spoken word passage is balanced with the choirs.

Here we see the music taking a turn for the magnificent, as we ascend the scale and the mountainside to reach the skies – this pattern is repeated on ‘To Enter One’s Mountain’.

The verse that follows is the author’s favorite. The repetitive chords – which in the context of the whole record follow the listener’s lack of stamina and provide space – serve as the backbone of the Celtic melody of the vocals. And they rise higher on another transposition from E to F, while the chords culminate in the cadence of I – V – I.

The story tells of stormy skies [sings: raging winds]
Black clouds gathered up high
And of lightning striking from a
Burning bloodred sky

And man lived and learned
The secret of steel

Ore of earth – fire of sky
Forged is blade of gods

D – C and Bb that follow bring forth recollections of the previous song. Indeed, Blood and Iron is the heart of the album, as it contains shadows of all the songs.

The rhythm recedes to the introductory tempo, even the same bass notes repeat themselves. Then the strumming on the next verse returns with elements of other songs mixed in the crawling riff of To Enter Your Mountain and the Phrygian D – D# foreboding of Bond of Blood and the open chords of Under the Runes; a large space for the album to breathe…

So the age to learn and to teach
for man begins, the power to know
the blood and iron discipline, and
tell the story of how man was granted
these shining blades of steel

The blood and iron motif returns, the ground has been laid by the D5 chord which effortlessly transforms into Dm. Soon the heavy power chords of the beginning of the verse whip the song into life for a final verse, as the song repeats itself, just for a little longer, never truly ending, but echoing as an everlasting stream, even after the final cadence. Eternity has been invoked by the magic chants of the glorious bard, as the power chords slowly climb the entire scale and come full circle back to the main acoustic riff:

Instead of interpreting the song according to theory – let us interpret it in terms of the secret of steel! We can see four parts, corresponding to four basic processes:

Casting: the amorphous notes give shape to the main riff, similar to molten metal flowing into a mold of sand.

Forging: the rhythm and Power of the song intensifies in a rhythmic verse. The song takes shape. Visually, we see the changes and everything seems clear. Yet slowly, the listener becomes absorbed and oblivious to the structure henceforth. Which leads us to the next stage.

Normalizing – Hardening: from this stage onwards the song works on an unconscious level, in a way similar to the changes in microstructure. The transpositions after the spoken passage increase steadily and the metal is quenched into the coolness of the acoustic.

Tempering: the song repeats itself, in this final stage, but in a less bouncy way, relying more on repetitive power chords. It is reinstated, mature, complete and leaves the listener emotionally gratified.

For man is άνθρωπος = άνω + θρώσκω + όπωπα (anthropos = ano + throsko + opopa), he who moves and looks upwards.
Alas, science and art forget their Faustian spirit, and are content in their discoveries, yet dogmatic or bribable fools those scientists are, for they do not know the basic principle of falsifiability. But Karl Popper will be vindicated in eternal recurrence thanks to our human ignorance, the root cause of which is cowardice.

His voice is so falso, but for the passion and its skaldic magic I wouldn’t change it for all the conservatory mediocrities in the world.

Extra: The Riddle of Steel
What is the secret of steel? First and fore most it is a riddle, central to the 1984 Conan film. Here we see Conan’s father recounting a story similar to the one recounted by Quorthon on the record. 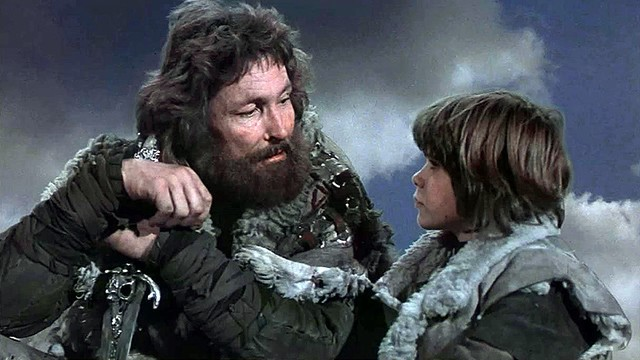 This you can trust.”

These words become Conan’s way of life. One day he would have to answer Crom, God of the Earth and tell him the riddle of steel to gain entrance into Valhalla.

Then again, this philosophy of not trusting anyone but the sword led Conan to being trapped by Thulsa Doom. Thulsa’s perspective was different:

“Yes! You know what it is, don’t you boy? Shall I tell you? It’s the least I can do. Steel isn’t strong, boy, flesh is stronger!…What is steel compared to the hand that wields it? Look at the strength in your body, the desire in your heart, I gave you this!”
Yet, Conan pondered on the tree of woe. Flesh is powerful, but it will eventually die. Steel is powerful, but it will eventually be broken.

It is the Will that commands both.