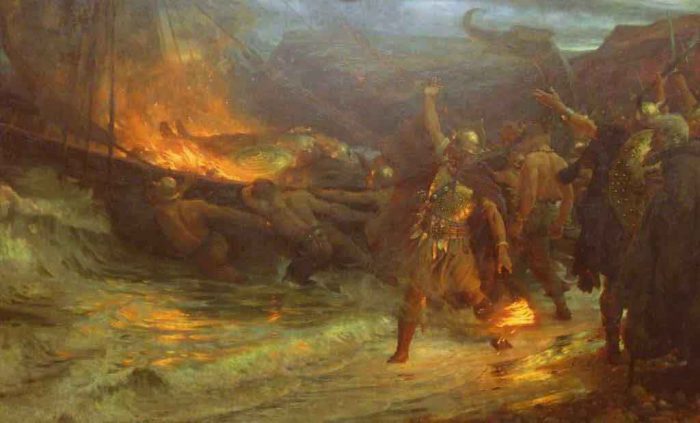 75.
Cattle die and kinsmen die,
thyself too soon must die,
but one thing never, I ween, will die, —
fair fame of one who has earned.

Gustav Holst wrote this theme in 1915, and it is contained in his Planets suite, op. 32. The suite is composed of 7 orchestral anthems to the 7 celestial bodies that control the fate of humanity from the night-sky, each piece corresponding to a particular temperament of a planet. The middle part from the hymn to Jupiter is named ‘’Thaxted’’ after the village on which he resided for most of his life and is the climax of the whole song – and one of the most covered songs in classical music. This chorale in Eb is truly the work of a master and is fitting for Bathory to cover the song, since both artists are characterized by a simple, austere style due to their influences from folk music. Indeed, this austerity, honesty and directness, so different from the values espoused by the intellectuals of his days, were the reasons that Holst found limited success until his forties. A shy and introverted man himself, he strived to distance all awards from his persona as he could not bear fame.

The dramatic rising from a melody centered on the C4-C5 octave for violins, violas, French horns and cellos, through another phrase that ascends to C5-C6 with the gradual addition of the flutes, clarinets, oboes and English horns, played in parallel octaves, provides the necessary emotional stirring, almost hymnal, that characterizes the song.

Its basis is in the astrological effects of the planets on the human soul. Nevertheless, weren’t those effects in themselves rooted in the views that the ancients held for their deities? Thus, we shall consider this song that celebrates the celestrial body dedicated to Jupiter as a hymn to the Roman god himself, since this is the simplest way on which we can make actual sense of Hammerheart and connects the themes of Vikings, gods (Twilight of the Gods, ‘my father’s gods’, the gods fighting and dropping iron to Earth on Blood and Iron) in a coherent whole.

Jupiter is Zeus, Jupiter is Thor. Jupiter is the planet that attracts all meteorites in the solar system due to his gravitational field, and protects the Earth, in the same way that Thor is guarding Asgard. The planet is sacrificing himself by letting his body getting ravaged by long-period comets from space, so that life can survive; yet again this might be just a poetic schema. But we have seen that there are parallels between the laws of nature and the principles that govern human behavior. Indeed, life requires death to be preserved, life demands sacrifice and increase in entropy outside of its system, this is the tragic law of Thermodynamics best exemplified by the ‘dark’ quote of Heraclitus: 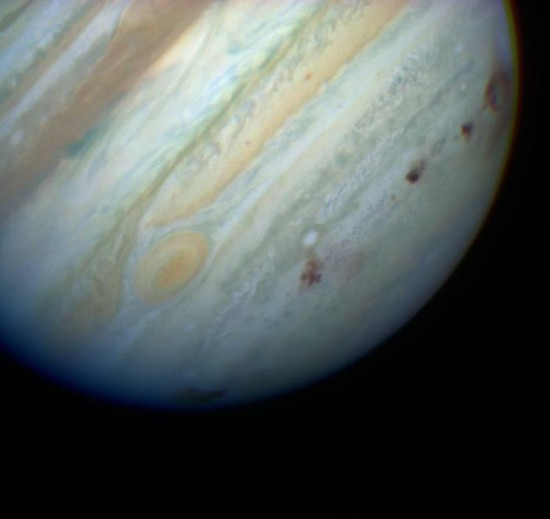 The heroic father of the gods, protector of Asgard and Midgard. Above you can see the ‘scars of battle’ on the gas giant’s surface.

76.
Cattle die and kinsmen die,
thyself too soon must die,
but one thing never, I ween, will die, —
the doom on each one dead.

Death is inevitable for all.

One day the darkness of inexistence will swallow all of us. Decay is necessary to replenish the soil and breed fresh life.
Our ideas and knowledge will be forever lost. They will give way to new ideas and new knowledge.

Even Odin knows. The norns have told him that he shall perish in Ragnarok. But the great god, exemplifying the virtue of a warrior, has ordered his nine flying daughters, the Valkyries to gather from the battlefields of Midgard the spirits of the dead heroes, to bring them to Valhalla. There they will dine and fight, and train, until the hour of the final battle is nigh.

Our hamingja will carry on. Our ego won’t. Our deeds define who we are. Our art, our music, our deeds, our phenotype shall be repeated. The illusory self, will pass by, but the Atman is forever. Odin shows us the way.

This is a sad world, in its Twilight. Perhaps all ages look like a Twilight, since there might have been no age without its horrors. Pain is real. Suffering, depression, injustice is the law and corruption. What we are projecting in the Twilight of the Gods is a world without values, losing orientation towards anything good and worthwhile. It is natural that we, like Arjun, want to throw our weapons in the ground, fall and refuse to fight.

What is the meaning of the word ‘god’? In greek, it is “theos” (see theology, theurgy and others) the root of which ‘theo’ (θέω) means ‘to run, to make haste’. God is a goal never to be reached. It runs away from the grasp of our reason. But it can be imitated: in ancient Greece virtuous mortals are favored by the gods. They don’t go into the halls of Hades, like shadows, but they are raised unto the Elysian fields.

A strong giant, a protecting god is the distant star we must ever pursue if we are to leave a legacy behind.

In Western culture, the heritage of self-sacrifice has been immense. The gods perish at Ragnarok. The Greek god Jesus – who has nothing to do with the Old Testament – and his advent was prophesized by Socrates and Plato in the Republic, as the ‘most just man’, that would love all regardless of the iniquities on which he was subjected – has as a symbol a man upon a torture device, a man who is considered as a man-god; Adonis, Osiris, Attis, Dionysus, also die, gods of the grain that will save the hungry human heart.

Yet, this song is focusing on a certain paragraph on the book of life: the heroes and the nameless dead, those that are filled with passion and love of the world and face the final unknown with a ‘pounding hammerheart’.

This indulgence into death, could be summed up with Holst’s attitude towards Thanatos, encapsulated in his Ode to Death, featuring the ‘only black is true, only death is real’ poem by Whitman:

Come lovely and soothing death,
Undulate round the world, serenely arriving, arriving,
In the day, in the night, to all, to each,
Sooner or later delicate death.

Prais’d be the fathomless universe,
For life and joy, and for objects and knowledge curious,
And for love, sweet love—but praise! praise! praise!
For the sure-enwinding arms of cool-enfolding death.

Dark mother always gliding near with soft feet,
Have none chanted for thee a chant of fullest welcome?
Then I chant it for thee, I glorify thee above all,
I bring thee a song that when thou must indeed come, come unfalteringly.
Approach strong deliveress,

When it is so, when thou hast taken them I joyously sing the dead,
Lost in the loving floating ocean of thee,
Laved in the flood of thy bliss O death.

Any parallels to Dissection and Dark Mother Divine are coincidental I guess. This death worship is not unlike the visions of eternal love of mystics, or the invocations to Maha Kali. It is analogous with the feeling of love that surpasses the self, a heroic attitude reaching out towards the stars, exemplified by all traditional civilizations and blurred by our abuse of vocabulary and chauvinism of dialectics. It is the marriage of the classical music that Quorthon loved with the spirit of metal, a marriage of heaven and hell indeed.

Quorthon rides this dragon of a composition with his excellent lyrics and vocals. His harmonically parallel movement to the superion orchestra accentuates the meaning, pushing the limits of human emotion to the extreme. More vocals are gradually added on top of each other, overcoming each other, a choir of eternal heroes, a choir of the fallen! People have said that his vocals are rough. Yes they are. But no other song encapsulates their skaldic power as Hammerheart. There are no fake choirs here, layer upon layer Quorthon’s voice is added, building up, sleepy, energetic, low, bass, young, old, all people he becomes and then his own self, leading the chorus into the Hall Up High! The victory of passion and heart over technique!

In truth, his heart was too strong for this world. He rests in Valhalla now, writing battle songs for the Aesir, until the end of days.
The short melodic lead pushes a bit higher the pitch register and celebrates life and death, the whole of existence, the joy of the world! The lyrics of Quorthon consummate this divine marriage, and say more than I ever wished to say.

This song is an ode to calm serene strength with which a hero faces his demise.

When the Greeks beat the Persians in Salamis, from one side one could hear the cries of an emperor urging slaves towards their death and on the other side the word “fatherland” motivating people who are free.

No wonder a civilization on its rise would feature virile art, such as the plays of Aeschylus to teach the young and old, and no wonder that such virile art would be written by a man who made no mention of the gifts that the gods conferred upon him as an individual, but rather said that:

Beneath this stone lies Aeschylus, son of Euphorion, the Athenian
Who perished in the wheat-bearing land of Gela
Of his noble prowess the grove of Marathon can speak,
And the long-haired Persian knows it well 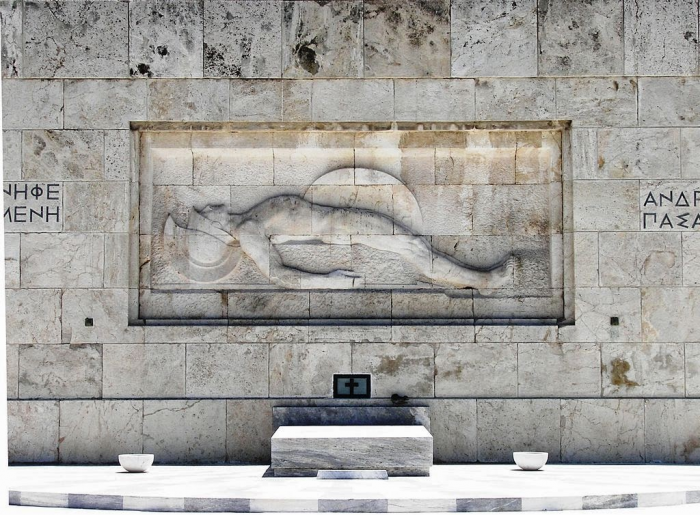 A poet once wondered ‘What is the homeland? It is the sun and its shallow coasts, the manifold mountains tall, every island that rises in the fog, each and every sea, each and every land, the ancient ruins… All are our homeland! And this and that, and these we bear in heart, which shines like the sun and cries within us: Onwards!’

For when the great clouds fills the air
And the thunder roars from o, so far away up in the sky
Then for sure you will know that I have reached the joyous hall up high

That was the end of our analysis. I would be glad if it was of any use, if not I hope you had a chance to rediscover Bathory’s music:

It’s not important if an album or a track is or is not about this or that shit. The important thing is if it gives you the kick inside. ~ Quorthon

Without music, life would be a mistake ~ Nietzsche 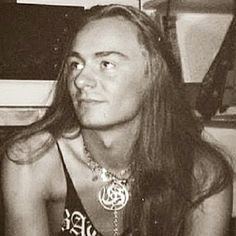