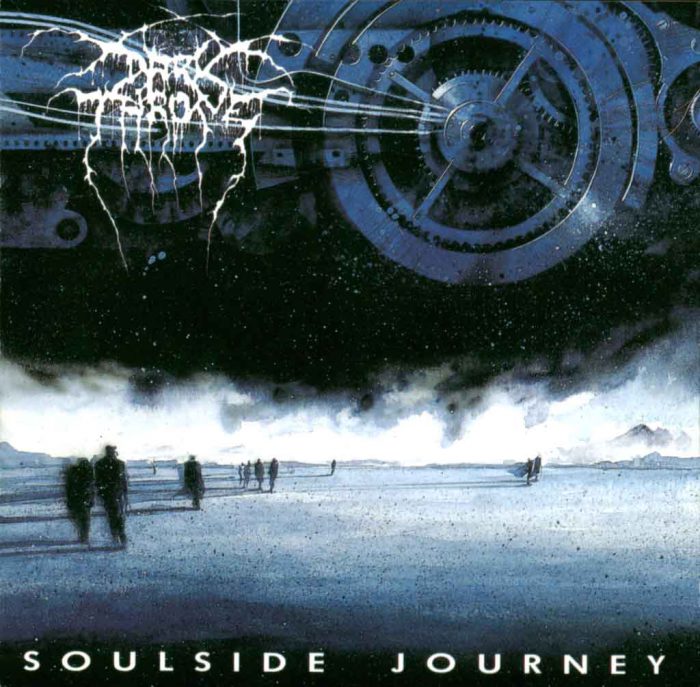 In order to transmit this feeling and make it credible, seven riffs flow into each other, for a climax needs context. Without context, all would be boring. This is the metal way of crafting a song.

Context in the Album:

The song’s nature is alien and inhuman. Therefore, its context in the album is very important. To make the height of its peak and the impact on the listener greater, the song is placed after an instrumental, before which lies the more humane thematic of Soulside Journey, where an occultist prepares the listener for the ride:

The two songs following “Neptune Towers” are more emotional in subject, nature and introduction, in order to take advantage of the contrast. The opening riff of “Sempinternal Sepulchrality” is melancholic and “Grave with a View” starts the same way, thus establishing a certain mood. By the placement of “Neptune Towers,” each song creates an antithesis with the next and previous songs, which makes for a varied and more complete emotional experience. Indeed, much like the compositions which are done riff-o-rama style, meaning according to Fenriz fitting great riffs together to create a song in the tradition of speed metal bands, the whole record resembles a journey.

Anatomy of the Composition:

The song is structured over seven different riffs:

This is an interesting way to arrange a song, a way which may often lead to disaster and aimless wandering. Nevertheless, not only the lyrics, but also the riffs suggest that AbBCd is mirrored in EFGH, with the tiny bass intermission serving as the surface of this mirror. We can deduce that AbBCd is the space traveler’s/narrator’s normal consciousness, as he struggles towards the alien megaliths of Neptune and EFGH is the entering into the zone of the unknown.

Overall, the thematic of the structure can be divided in four parts:

III. Journey is reaching its build-up. Awe is interplayed with struggle.

Now let us analyze the development of the song according to each riff.

A: An Autopsy riff creates a feeling of vastness through its slowness. Guitar leads are layered in 4th intervals over the basic melody, adding a space-caravan sense of traveling. Those 4ths very often prepare for the next riff by building anticipation.

b: A small fill that paves the way for the first verse. Essentially, this is B played with power chords.

B: The time signature makes the atmosphere volatile, as the human factor appears by vocals, vulnerable yet determined, and describes the landscape:

C: Tremolo picking provides a sense of transcendence through death metal ecstasy. This technique often is used in contrast to “heavy” riffs, a contrast resembling flow and ebb respectively, dominance and embracing, point and circle. The narrator is overwhelmed by the landscape as the root goes to F#.

Then speed deceptively falls to add determination. It also signifies battle with the weather and loss of stamina.

On a ship of curiosity I sail
((oh) what treasure can be found here!)
And why must eyes face this
Unearthly show of morbid climate

d: This is the coronation of the first part. It is beautiful how much value can be added just in two chords, with which we expect a return to riff A. However, there is no turning back. Those chords suggest a cryptic foreshadowing of the final climax, which is also rooted in C#. But no other hint of the riff appears.

E: After the bass intrusion, this riff escalates in a A B A# C# pattern and the constituent notes of those disintegrated chords go up and down in perfect fifth or fourth intervals. A# when contrasted with A, creates a feeling of an atmosphere that is hostile to life. At the same time the fourths and fifths fill the listener with awe. Therein lies the essence of metal, in the balance of opposites.

F: F signifies going down to the gaseous abyss of the planet to behold the C root and through chromaticism return to C#. This movement builds anticipation for the peak that follows:

Behind the Neptune hillsides
They say the towers stand tall.
Built by hands dissimilar to mine
And Brought alive
By hearts of ancient alien cultures

G: And now the climax; the alien megastructure reveals itself in all its Lovecraftian splendor. The song returns to C# and a layer of keyboards is used as a communicator of the cosmicist feeling of alien existence. This is the riff that Fenriz wishes to have as a ringtone and reminds one of the “Doomsday Celebration” interlude by Morbid Angel. It has an awakening air indeed.

Concerning the composition technique, according to Fenriz:

Riffs were always important for us, knitting them together was never really important though.

Nevertheless, as we explained above there is definitely a pattern of arrangement which makes sense. Thus, regardless of what Fenriz says, the riffs were stuck together unconsciously, through their own aesthetic taste. It is important to note that this fact does not break the rules of metal or music, in fact it validates them, by proclaiming the importance of the riff and a more important fact:

There is more to art than theory, going to the conservatory and perfecting technique. Music is about passion, something that is very difficult to put down, and without which all is for naught and music is just… not metal enough.

…not by wisdom do poets write poetry, but by a sort of genius and inspiration; they are like diviners or soothsayers who also say many fine things, but do not understand the meaning of them.
— Socrates, Apology

Inconceivable events and conditions form a class apart from all other story elements, and cannot be made convincing by any mere process of casual narration. They have the handicap of incredibility to overcome; and this can be accomplished only through a careful realism in every other phase of the story, plus a gradual atmospheric or emotional build-up of the utmost subtlety.
— H.P. Lovecraft

This song is a brilliant example of using keyboards as part of the development of the song, when most times they are used as stevia injections or to appear “symphonic” and “progressive.” By their scarcity they appear alien and grotesque instead.

This fact serves to explain the difference between true metal and rock influenced gimmicks. While the latter would rely on overusing keyboards right from the beginning and throughout the composition, true metal first creates a context for the highlight or “heavy part”, an atmosphere, to give it credibility and meaning. To sum up, a great metal song can often be like a story by H. P. Lovecraft.

Hopefully, this song analysis series can provide some tools for death metal musicians who might want to meditate more on their craft and the meaning they forge inside their own songs. In the era of the dearth of quality metal, we should strive to make this metal ourselves or contribute towards an exploration of its methods by many means, such as the dissemination of relevant information, websites, books, artists and more, as artists, critics and more importantly as listeners. In the words of Bathory, “damned he who sits still and curse, woe the dark but will do not a thing; to light the torch : to shed the light : for him the dark is all within.”

In the end, the song succeeds in communicating a cathartic feeling of cosmicism by a brief encounter with the otherworldly and furthermore, provides an important lesson in metal craftmanship by dispelling the two evils that plague music that is ‘dark’. There is nothing dark about this song. The lyrics talk about confronting the unknown and being changed by it, not about the pathetic emotional experience of our tiny lives, which is something truly dark and pessimistic. To facilitate the storytelling, metal technique liberates the inspiration of the artist, breaking free from verse-chorus structures through power chords and chromaticism. The protagonist is strong to have navigated the hostile winds of Neptune. There is nothing dark here, only power; power and humility before the grand mysteries of nature.