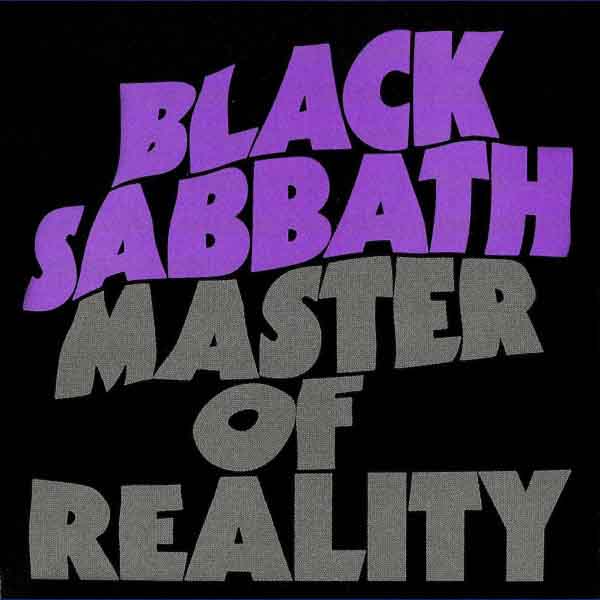 The resurgence of Black Sabbath following the success of their new album 13 presents an ironic success when compared with the more substantial legacy of their earlier work. Without the first five albums, metal as we now know it would not exist. And on one album in particular, Black Sabbath laid the groundwork for three subgenres — stoner metal, thrash metal and doom metal — such that future generations could pick up the hint and fully develop these new alloys of the raw metal that Black Sabbath forged forty years ago.

Black Sabbath is widely acknowledged by critics and fans as the beginning of heavy metal. From the eerie tri-tone chills of “Black Sabbath” to the menacing crawl of “Electric Funeral,” from the sludge of “Cornucopia” to the pop sensibility of “Killing Yourself to Live,” the black stamp of Black Sabbath radiates forward into the future, culminating in a reprise of their career (including post-Ozzy line-ups) in 13. Ranking the first five Black Sabbath works on a scale of one to five, a convincing argument could be made for either chronological sequence going from best to least. It’s a toss-up for fans and critics alike. Paranoid garners most of the nods as the most influential album from all corners, and many fans cite Vol. 4 as their favorite. Numerous others consider Sabbath Bloody Sabbath the salvation of Black Sabbath, bringing a newer sound to the band

But whichever direction you go, Master of Reality stands in the center. It is the first, and maybe the last, Black Sabbath album from the Ozzy-era (and perhaps from the entire canon) to purge extraneous elements and render a pure metal, so pure that other alloys — especially stoner metal, thrash metal, and doom metal –- would not exist without it. While seeds of different genres surely exist on the other four albums mentioned, I will be arguing that Master of Reality not only undergirds these three subgenres of heavy metal but may well be the finest classic Black Sabbath album.

From start to finish, Master of Reality casts a dark, heavy, menacing, and philosophical spell on the listener. Perhaps “uncompromising” describes it best. As an artifact judged solely on its own composition and delivery, Master of Reality may be the first metal album conceived of as a metal album. While the first two Black Sabbath albums undeniably forge many elements of heavy metal, each deviates at certain points. Black Sabbath has numerous forays into jazz and blues. It’s heavy when it’s heavy, but an almost exploratory vibe pervades about one-third of the album. Paranoid, while certainly heavier overall and much more consistent than Black Sabbath, retains blues and jazz elements that do not appear on Master of Reality. The first two albums stand as classics of the genre, and valid arguments for their status as primordial metal albums absolutely exist. However, the unity and purposefulness of Master of Reality indicate that these albums were like drafts of an essay, brimming with good ideas and clever phrases but ultimately collections of elements rather than unified wholes. Master of Reality starts heavy, grows heavier, and finishes heaviest. As the analysis below will demonstrate, the thematic consistency of this album far exceeds that of its predecessors. The lyrical expression of the themes reflects a deeper and more reasoned understanding of the issues involved. Musically, the songs are tighter and more direct. While the free-form jams of the first two albums are quite interesting and in my opinion as good as anything of the era, they reflect yet again a collection of elements. Master of Reality offers much more stylistic consistency, indicating a more holistic approach to the project.

The opening track, “Sweet Leaf” stands as a blueprint for stoner metal. The lyrics celebrate marijuana as a window to another dimension only the enlightened perceive: “Straight people don’t know what you’re about / They put you down and shut you out / You gave to me a new belief / And soon the world will love you sweet leaf.” The plodding riff that dominates the song permeates the descendant genre. Then the break from around 2:35-3:25 shifts into a proto-thrash mode (especially evident in Bill Ward’s drumming) that will show up again and again on this record. The song concludes with the stoner plodding that begins it.

“After Forever” and “Children of the Grave” carry the proto-thrash elements to the next level. While many critics have begun to agree that “Symptom of the Universe” off Sabotage inaugurates proto-thrash, one hearing of Master of Reality should be adequate evidence that the thrash style was being perfected, not invented, by the time “Symptom” was pressed into vinyl. Taking on religion (and ironically deciding in its favor, saying “They should realize before they criticize / That God is the only way to love”), the shouted lyrics of “After Forever” offer a direct exploration of the question of the soul versus the institutionalized mechanisms that supposedly provide for its sustenance. Both of these themes persist into thrash metal. The up-tempo opening and subsequent power chord extravaganza stand as a stark contrast with the opening track. “Children of the Grave” is pure thrash. Again featuring a shouted vocal, the song amplifies lyrics that challenge war and societal manipulation with verses like “Show the world that love is still alive you must be brave / Or your children of today are children of the grave.” The lyrics of this song presage two of the most prominent themes in thrash metal. Like “Paranoid” before it, “Children of the Grave” chugs forward, adding sustained chord progressions above it. The break from 2:10-2:20 proves itself worthy thrash to this day. Bill Ward’s work heralds the prominence of drums in thrash. Taken together, these two songs form the blueprint for thrash metal.

“Lord of this World,” “Solitude,” and “Into the Void” constitute a “doom suite.” As Osbourne’s plaintive wail pierces our eardrums, evil, demonic possession, psychological instability, and societal collapse penetrate our consciousness like a needle pushing a drug under the skin. The lyrics reflect a pessimism only hinted at in the preceding songs. The song titles themselves indicate a doom ethos. Try to imagine a darker or doomier final song than “Into the Void.” With the exception of a break in “Into the Void,” the tempos, riffs, and rhythms slow to a sometimes mechanistic, sometimes mournful, sometimes throbbing, always menacing procession of deliberate despair. The churning “Lord of this World” offers a view of demonic influence based not on Satan’s assiduity but human apathy: “You made me master of the world where you exist / The soul I took from you was not even missed.” The naysayers vilified in “After Forever” have won, and the dim hope that “God is the only way to love” offered in “After Forever” is snuffed out like a candle after a mass. “Solitude,” a slower, softer song expresses the ennui of a person suffering from self-directed pessimism. Ostensibly about a woman, the lyrics also sustain an interpretation of addiction or perhaps depression: “Crying and thinking is all that I do / Memories I have remind me of you.” The theme of hopelessness would become a staple of doom metal. “Into the Void” comprises interesting movements and perhaps one of the best introductory and main body riffs in all of Black Sabbath. The theme of contradictory practices, probably based on the co-occurrence of the Apollo missions and the Vietnam War, ultimately rests on the fact that hope is an illusion and the only peace that exists comes from journeying into the void — not on a rocket ship but in a grave on a planet “left to Satan and his slaves.” Again, the hope expressed in “After Forever” falls to the psychological manipulation of the children of the grave. The thematic consistency across the album is summarized and re-presented as a void that ultimately becomes the only option: a dark, heavy, menacing, and philosophical elaboration of the pessimism that will come to characterize heavy metal.

Master of Reality presents an overall coherence and depth reflective of a band that has realized its vision. Working out the details during the production of their first two records, Black Sabbath tempered that vision with experience. The musical, lyrical, and thematic sophistication of this album leads to an even heavier sound than had existed before. While it may be that down-tuning contributed to a darker sound, the beauty of this album emerges not from lower notes but from higher understanding. Some may suggest that Vol. 4 goes the next step further, but I would argue that it is the first step down-less consistent, less profound (although of Vol. 4 possesses a rather remarkable lyrical finesse). Sabbath Bloody Sabbath seems in the main a different enterprise than the first four albums (though it does elaborate some of the elements started on Vol. 4.) Some may suggest that Black Sabbath was an almost miraculous first outing, therefore making it best. I would agree that it laid the foundation for the genre but lacks the unity and purpose of Master of Reality, which is the album that confirmed the genre. Some may suggest the commercial success and exposure of Paranoid makes it the best expression of Black Sabbath’s ethos. Paranoid ranks as one of the greatest albums in the Sabbath canon, and many arguments could be made about the songs on Paranoid being their best work. But this analysis seeks to determine the best album. And Paranoid lacks the lyrical, thematic, and musical consistency of Master of Reality. In fact, from my perspective this level of excellence does not reappear until Heaven and Hell. But that album resulted from a new line-up and a new vision. In the end, I have to choose Master of Reality over Heaven and Hell.

A true testament to the importance of this album appears in the track list for 1997’s live collection Reunion. If we accept the postulate that Black Sabbath intended this collection to be a compendium representing the legacy of the Ozzy era as it stood at that time, the importance of Master of Reality becomes clear. Only four songs from the final five albums of the era are included. Only three are chosen from the eponymous first album. That leaves five songs each from Paranoid and Master of Reality (I’ll concede that “Orchid” is less important than any of the songs from Paranoid, yet there it is). With many fine tunes available from the final five albums, Black Sabbath included two-thirds of Master of Reality (four of six full-length songs). Surely they would not have featured so much of this album (and so little of the final five) if they did not want it to represent their legacy.

At the very least, Master of Reality caps the most important three-album sequence in the history of heavy metal. Although the first two albums present fierce, fatalistic, and fear-laden songs, songs with symphonic sensibilities and fusion-based energy, Master of Reality far exceeds both of them as a holistic project. The musical consistency and thematic pessimism of this album refines the ethos and aesthetic of the first two albums into a tighter work of art, at once more controlled and more innovative, perhaps because of the greater degree of precision and planning. Further, the variety of styles and increasing darkness of the themes and lyrics as the album progresses create the design signatures for the stoner, thrash, and doom metal of today, making it more influential than a cursory understanding would indicate. As a result Master of Reality reigns as the finest Black Sabbath album.