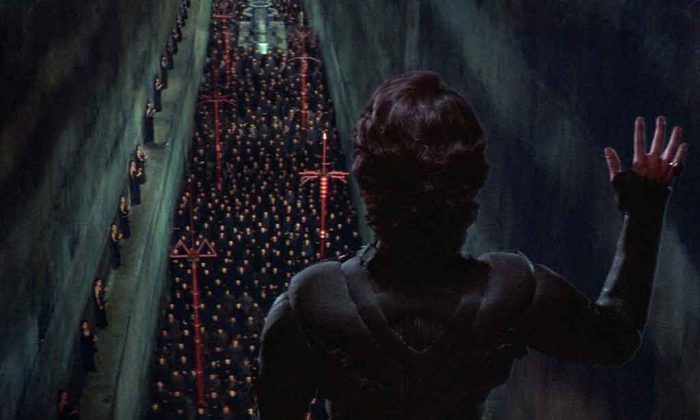 Full moon calls thee – Shai-Hulud shall thou see; Red the night, dusky sky, Bloody death didst thou die. We pray to a moon: she is round — Luck with us will then abound, What we seek for shall be found In the land of solid ground.

When compared to the lyrics to “Hell Awaits” we can see the similarities:

This suggests yet more influences linking death metal to epic literature such as that of J.R.R. Tolkien, Frank Herbert, and H.P. Lovecraft which retaliated against modern society with an alternate view of our existence, both past and future of our own, which transformed our fears into tantalizing opportunities by embracing warfare, chaos, death, challenge, and struggle.

Those works in turn pointed to the vast history of Western epic poems, ranging from The Odyssey to Beowulf and Le Morte d’Arthur, although we might also include the Kalevala and Nibelungenlied as well as The Aeneid. Metal is not modernism, but a revolt against it, turning its language of ugly utilitarianism and its fears of personal mortality into an expression of beauty and potential.