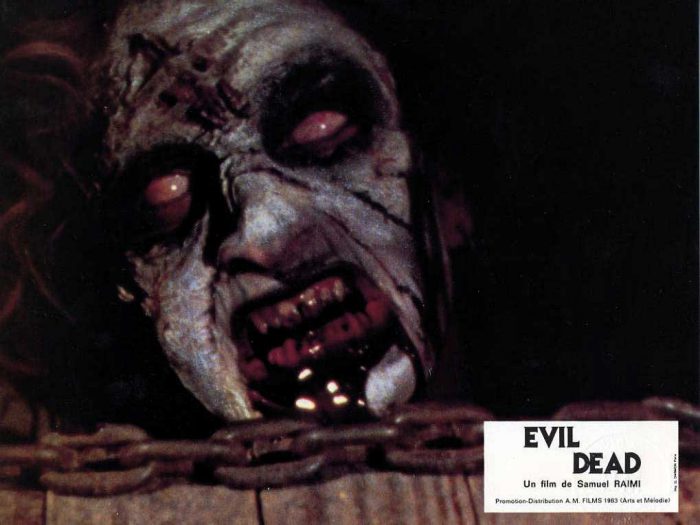 Evil dead is considered a cult horror movie due to its ability to reinvent the codes of horror movies that Halloween has imposed at the time of time of release and the lack of funds from investment. This film would also serve as a source of inspiration to many metal bands though not because of its story telling methods nor narrative development. The outdated gore and the fact that the movie is clearly trapped in its time make this a fun movie for most but apart from some interesting lore there isn’t much to see here.

But the mainstream world would fall in love with this movie not for narrative or the lore contained within the film, but for the ingenuity of the special effects and the ability for the producers to depict gore in a realistic manner with such limited funds. The “shaky cam” which consisted of a long piece of wood with makeshift handles with the camera screwed in the middle was an invention for this movie that would then spread throughout cinema. This was then carried by two members of the crew in the most unprofessional manner to create the effect of a genuine being lurking behind the protagonists. The final shot consisted of using the shaky cam but this time on a moving bicycle to get the longest shot possible. When some of the cast injured themselves, the director would then start poking their wounds to cause more suffering. Supposedly the cast were purposefully kept in inhumane living conditions so that the discomfort would translate into better performances but in reality, this seems more like a technique to generate hype for a cult movie than any serious artistic idea.

The lore of this movie is taken from H.P Lovecraft and introduces the Sumerian Demons with the help of a Sumerian version of the book of the dead and a recording left over by an archaeologist who has cursed by reciting the incantation that summons these demons. An interesting novelty is the Castle Kandar which is barely mentioned as the being the home of these demons yet was influential to a lot of artists since there was so little material dedicated to the lore of this world and that created a need for different minds to fill the gaps presented by this movie in their own manner. Deicide and Death both reference the lore on their songs ‘Dead by Dawn’ and ‘Evil Dead’ respectively. Though Schuldiner retorted to simply narrating the process of controlling a host. Benton decides to explore the lore and further binds it with its main influence The Necronomicon and leads to a blasphemous conclusion. Unfortunately, the lore is only secondary in this movie and is only there to introduce the horror in the story and for Hessians this is basically all that should matter in this movie as the rest doesn’t offer much.

The character developments are minimalistic if not inexistent as Ash the main protagonist doesn’t have any particular endearing qualities nor do any of the characters as they are killed one by one. None of them progress beyond being typical teenagers. The only thing that separates Ash from the others is his loyalty and altruism. He does all he can to keep his group of friends united while they each panic and think of their own preservation, inadvertently killing themselves in the process. Ash survives at the end thanks to a gift of love for his girlfriend and ironically is the only one to make it to the final scene. The women just screech and scream hysterically or in the case of Ash’s sister get raped by tree branches and return home in a sexualized manner. Ash’s best friend is the stereotypical American jock and his death is a sigh of relief for the audience. The demons do not inspire fear and just seek to mock Ash throughout the movie. The demons are juvenile and are annoying in the same way that five-year-old children without the proper stimulation tend to be. Nothing is learnt about anyone in this movie and any character is completely replaceable and useless.

Evil Dead remains a good brain-dead movie if you have nothing else to do but for those seeking a truly horrifying experience or something resembling metal, you should turn elsewhere. The movie attempts to scare its audience with a constant ominous presence and cartoon like gore. Many bands may have had their start Sumerian mythology and Lovecraft from this film but those who could command their lyrical and musical material, expressed much great horror than this piece could ever do and this will remain a side note in both cinema and metal that provided the spark for far greater artistic expressions.