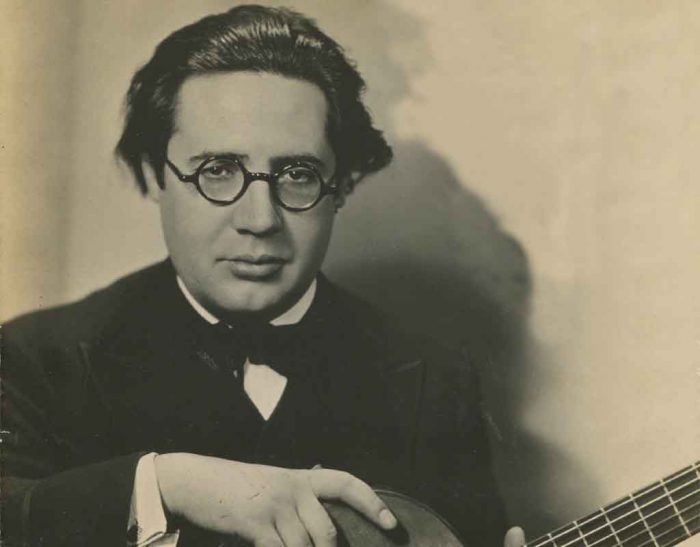 After the first world war, Segovia and other classical guitarists demonstrated the range of the guitar and expanded the lexicon of techniques, paving the way for the rock explosion:

Segovia’s fellow musicians continued at this point in his career to be his prime supporters and often composed most of his audiences as he concertized throughout Europe. But by 1928 his performances of the Baroque adaptations of Bach and Scarlatti, coupled with the contemporary offerings of De Falla and Mario Castelnuovo-Tedesco had increased his appeal so that an American concert was seen as financially viable.

Postwar years brought renewed interest in the guitar and not just on a classical level. Charlie Christian, an American black, and Django Reinhardt, a Gypsy, had made of it a serious jazz instrument in the 1930s and it became the mainstay of an emerging form of blues and rhythm soon to be known as rock ‘n’ roll.

Contrary to the official narrative, which sees rock as derived from blues, not just blues but rock, country, and jazz found their origin in the collision between popular music songs, mostly UK in origin, and the new guitar techniques.

Segovia adapted to guitar many classical pieces based on similar songs from Germany, England, and his native Spain, creating a similar fusion with the depth of jazz, the energy and technique of rock, and the structural depth of death metal, although this latter was lost for several generations.

Listening to his work now, one can note in each songs multiple techniques and phrases, each of which was later expanded into a notable rock, blues, or jazz composition. This shows a clearer form of music being adapted to the needs a mass audience, aided by first radio and later recorded music.

As we look back on what Segovia did, we can conclude as did others:

“He belongs to the very small group of musicians who by transcendent powers of execution and imagination create an art of their own that sometimes seems to transform the very nature of their medium.”

[Segovia] became a philosopher as well as a performer and in 1961 likened his playing to a construction project.

“When one puts up a building one makes an elaborate scaffold to get everything into its proper place. But when one takes the scaffold down, the building must stand by itself with no trace of the means by which it was erected. That is how a musician should work.”

In 1981, Lawrence Christon, a critic for the Los Angeles Times and a guitarist, took Segovia’s master class at USC and found that “the largest lesson was his poet’s gift for bringing us back to our purest senses. He taught us throughout that one cannot understand music or play it well without listening first.”