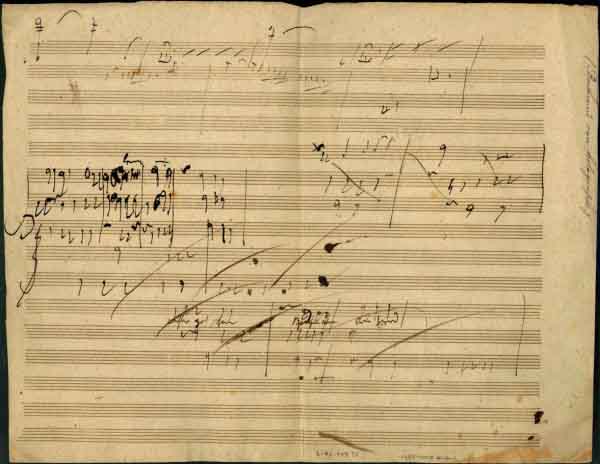 This seems as good a time as any to note that the music industry, which peaked in 1996, has since died from a lack of ideas.

We all know metal is in trouble and has been since a couple years before the industry peak, simply because it had run through its Wagnerian cycle. Proto-metal established the dark mood, heavy metal made it uptempo, then underground metal gave it structure and finally atmosphere with black metal.

None have been able to top that, and the bar was raised by bands like Summoning, Burzum, Atheist, and Gorguts to a point where none could top it. Metal had grown up like previous genres such as jazz and progressive rock, and now demanded compositions closer to a classical level.

Even more, horror of horrors, it became a template. The pioneers made something new, and then everyone else showed up to emulate it, and because the originals had built a fan base, this stuff kept getting purchased despite being mediocre.

Now we have a scene where the rare good quality black metal release not only occurs infrequently, but is ignored by the audience because it does not fit the droning, mediocre template they have come to expect. The fans for the most part no longer recognize or want quality.

This seems horrible for metal, but the same proves true for every other genre out there. A wave of mediocrity has overtaken music, and the internet plus desktop music publishing has just made this harder with a flood of new music that is all about of the same value.

It turns out that all of the bottlenecks, adversities, and checks built into the old way of doing things had an advantage: they turned aside the many, promoted the few, and gave no one an easy “paint by numbers” procedure for releasing an album which gave them a claim to being part of something other than their taxes, jobs, and Costco purchases.

Popular music was great when it was a frontier. For awhile that frontier was jazz, but then the academics took over and turned it into sterile theoretical jams. Then rock burst onto the scene, full of energy, but soon that became such a template that it unintentionally parodied itself.

Punk revitalized the music industry by casting aside some of the overhead. Overhead means costs of being in the game; for rock, this meant mastering the techniques in vogue, inserting oneself into the social scene, and working with the label system.

Casting all that aside, punk embraced the do-it-yourself outlook such that a band could use a four-track to record a seven inch and if it was good, rise to the top of the genre. This is what a frontier looks like, and for a brief while, it produced great music.

But then the slavery of history emerged: with punk well-defined, bands felt a need to imitate the past so that the audience would recognize their music. All punk bands started to sound roughly the same since they used their influences as templates instead of inspirations, and the industry took over.

Metal broke free from this briefly with its lo-fi approach, but as soon as the big music magazines started reporting on it and record stores carrying it, underground metal got assimilated just as much as any other rock genre.

The industry turned to hip-hop mostly for the low production cost. Like Coca-Cola, the music is inexpensive to produce and because it is all so similar, indistinguishable from the rest of the genre, therefore whoever has media power makes the next hits.

Your average pop genre consists of a three by five matrix. It has five vocal patterns, five techniques, and five basic modal or harmonic patterns. Recombine those, following the formula of verse-chorus song plus “conventions” such as spoken interludes, and you get a fungible stream of music.

At this point, overhead costs of production have decreased, but those of participation have increased. To get heard in the roaring deluge of music requires paying off the writers, publicists, podcasters, and other influencers, and then producing constant novel content while staging public events to stay in the news.

This means that to succeed in music, an artist must be a business first, and only secondarily a musician. Even more, the audience provides demand and shapes expectations, so in order to get noticed a musician must both ape the past and rebel against it in trivial and increasingly nonsensical ways.

The industry took over and now truly great acts will not be noticed, but the glad-handers and toadies will always have record contracts.

Most humans are driven by a social impulse which rewards accumulation of wealth, power, and status. This means that they finally feel in control. Even more than a desire to be comfortable, this motivates people. This is why they want to be in popular music acts.

That in turn makes them willing to do whatever is necessary to participate, and they do not care if their contribution achieves nothing. They just want their piece of the pie, which they see as more important than moving something forward by both maintaining the past and adding unique content.

Imagine a planet dedicated to punk music. We send all the musicians there and then come back in ten thousand years where the culture they produced will still be churning out music. What will it sound like? There are a couple options.

When you hear popular music used in movies, you see the former role-tool model playing out. Some songs convey characters being wild, some sadness, some other clichés for the purpose of cueing the audience in to the feelings they should have.

In a situation such as that, the people capable of making great music get excluded from the industry and are replaced with shopkeepers who make what the audience wants to hear because it has already heard it and just needs a cue.

People who listen to music solely to express a single emotion like sadness or rage are just cueing. They want a soundtrack for that moment like there would be in a movie, and primitive cultures worldwide use music in this way the same as first-world grocery stores.

Diversity also smashed our industry. When there is one audience, with one culture, music can riff on cultural norms and expand them or string them together into stories, leading it toward art, or the outer journey that triggers an inner journey. Now we have only niches with their own conventions.

In my view, what we will see in the future is a new kind of underground music, probably entirely performed and sold offline in order to keep it away from the audience that will transmute it into the same old thing because big bucks await behind that door.

Eventually these acts will discover and get bumped up into the mainstream, but many in the new underground will prefer instead to get non-remunerative rewards, such as gaining entry to new social circles and making their money through that instead.

Just like with underground metal, its topics will baffle the ordinary normie because they will not understand the why. Humanity is the midst of a transition from egotism to a transcendental naturalistic outlook, and these ideas will appear bizarre and alien to cube-slaves and influencers.

Good production is easy now, so production will no longer be a focus, but nor will it be ignored in the low-fi way. Bands will use it as an instrument, not simply as adornment. There are new possibilities in sound that are barely being explored, and these will be used to make very conventional music.

The next generation of punks and metalheads will not be sawing away in front of a four-track but making little symphonies on desktop computers (no, I do not think they will use their phones; this music will require concentration, not external “inspiration” from social events).

They will want to make their music unrecognizable, much as death metal and punk did, but they will do this by distorting, bending, reshaping, and layering sound so that they can use everyday sounds in new forms as instruments.

In addition, they are going to reject the formulas of the past, whether blues noodling or natural minor scale indie drone anthems. Instead, they are going to go back to the core of music, which is instrumental melody. Vocals may not be present except as distorted, unrecognizable instruments.

Most likely, the reliance on beats and vocals will entirely disappear, since songs led by the vocals inevitably tend to the pop formula, and reliance on beats forces music into bite-size pieces. These new works will be more like classical, jazz, original ambient like Tangerine Dream, or progressive rock, where the format of each piece follows the content unpredictably.

Expect something like ambient soundtracks with an emphasis on leading melody instead of background atmosphere. Look for music that develops itself from raw sound so that it can encode what has eternally made good music, melody and harmony working to portray a unique experience of life, into an otherwordly form.

But most of all, it makes sense to view this music as occurring outside the industry. Most of it will be “performed” live with computer aid to select groups, sold via physical medium only, and never discoverable in a search engine. Only obscurity can protect art.

9 thoughts on “The Future of Music”