Genre and subgenre identify the differing factions within metal music, which mate analytical technique to worldview and to the sound they desire. For this reason, a death metal band is not only aesthetically and musically different from a speed metal band, but is different in ideology and artistic outlook, representing together a philosophy of life. 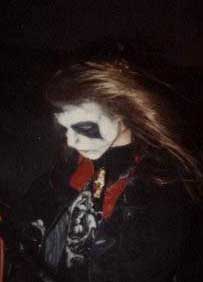 For many people, genres convey the same ambience that products do: if the thing can be categorized it is one of several things that perform as it does, therefore it’s just a different face on the same essential material. Some people even extend this theory to the differences between rock and metal. This is categorical thinking and it does not reflect the usage of genre/subgenre terminology.

Heavy metal begat speed metal and thrash, which begat in crossover death metal and grindcore, which crossed over once again to make of a flowering of metal styles in the most diverse genre yet: black metal (ranging from slow percussive material to lightning fast melodic to folk-ish rhythms and acoustic guitars). It has all of the characteristics of the previous metals in some form although it ostensibly tends toward the nontechnical. It also drops some of the traditions and patternings of the older material, and through its composition suggests a chaos theory of musical composition.

Yet heavy metal bands, some speed metal bands (but not many), death metal bands, and grindcore bands continue to survive simultaneously. Genre are belief clusters apart from other forms of expression – they have their own self-defined language and topic structure – but subgenre are diversified elements of that original idea, prospering in their own tension as much as similarity to the rest of the family.

For even more kicks, the concept of genre demonstrates a philosophical difference between categorical thinking and nihilistic thinking. In the former system, each thing has a property which defines its boundaries and isolates it from the chaotic, the unknown. In the latter chaos is a natural formation of complexity in our environments which creates life, throughout the perceived boundaries of objects and in a hierarchy of systems which derive their position from placement in a position of energy exchange within the overall system. Here follow a few tips:

In metal, genre means ideas. What is the basic approach of different bands? Heavy metal: hippie-style breakdown and apocalyptic recognition; Speed metal: apocalyptic paranoia and realizations of insanity behind social oppression; Death metal: deconstruction of humanity through insanity and fear of mortality, evolution of mind toward complexity of focus; Black metal: twilight of humanity postmodern joyful mourning; Thrash: frenetic rejection and belief in core concepts; Doom metal: misery is inherent so appreciate pain as masochism of self-matyrdom in creation. Central ideology, called “metal” although there is perhaps no type of music which falls into that pure category: joy and awareness through nihilism and the separation of humanity from doubt and evil as concepts. It folds forth as music theory, structure of songs and language, lyrics, and aesthetic.

With these concepts in mind, you can see how metalheads often refer to the world of light illuminating a silhouette (shadow outline) as society, where the world of light shining from within the darkness that describes the function of objects in terms of abstract workings in systemic hierarchies, or connected levels of ideas, remains a preferred method for interpreting reality. Through ideas encoded in the most seemingly unlikely package, metal expresses a new reality within what most of us have overlooked as existence.