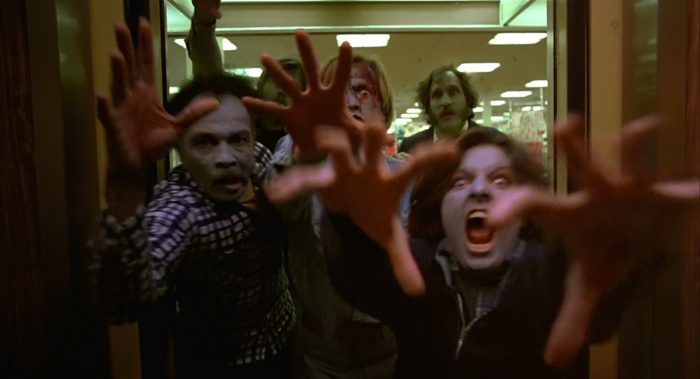 History tells us some things about zombie lore, or at least, that of the dead coming to life. The Roman Tables (the official record of the Holy Roman Empire) record that an entire graveyard of zombies also rose at the same time of the resurrection of Christ. Lore from other societies links giganticism with cannibalism, such as the Paiute legend of red-haired giants who were their ancestors. This lives on in the modern idea of zombies having unstoppable strength.

Modern brain-dining as depicted in film and television is primartily instinctive. Violence is in the amygdala, the ancient part of the brain. The id of zombies is on hyper-mode. The parts of their brains (the super-ego) which appeal to order and reason have been incapacitated.

Director George Romero provided us with the clearest view of zombies of this nature. When we talk about zombies we are generally speaking about the Romero version, which is the basis of the modern concept of zombies. A slow-moving, staggering, drooling, (mostly) mindless, neurocannibalistic, decaying and crazed zombie-crat is the norm. And the zombies do not perish if they starved for brains, which is somewhat surprising. His film Dawn of the Dead took on consumer-capitalism by saying that people are like zombies who mindlessly shop for things they don’t really need, pointlessly socialize, and follow the current order of things.

David Cronenberg took this a step further than Romero in his early film Shivers, in which the zombies not only want to eat your brains, but they also want to copulate with their victims while eating them alive. In Day of the Dead, Romero tried to ask the question of whether zombies could be taught to reason beyond their base instincts. The scientist in that film trains a zombie to do simple things like answer a phone. But he finds that it takes too much time and too many resources to be worth the effort.

These portrayals show us the economic and sociological basis of the zombie metaphor. They eat brains because life is a zero-sum game. Some win, and therefor some must lose. Just like in the real economy some cant get decent food or healthcare or security and they die quick on the streets or prison, or live long in misery and isolation. Witness the #BlackLivesMatter movement, like zombies, going around in herds threatening public and private property. Threatening people’s rights to life, liberty, and property because their base instincts tell them to be violent.

Meanwhile others (“the global elite” or “the one percent”) are living the high life and are immune to society’s decline until the final collapse. Romero captured that with his rich gated high rise community called Fiddler’s Green in Land of the Dead. In this, he revealed his criticism of modern society: mass conformity and going through the motions, hoping that emulating past successes will reproduce them, while consuming everything in sight and possessed by a pathological need to destroy intelligence and create more people like them.

Compare this to other statements of the robotic nature of modern times, such as Kraftwerk’s “The Robots” or the entire oeuvre of Devo, Ministry or KMFDM. In these views, the zombies are less biological than robotic in their obedience of what others are doing. They view the creation of masses as the root of this mechanical behavior. Romero’s zombies are similarly products of their time and its mass culture of consumerism, equality, and social power.

The original Night of the Living Dead was unique for its time in having cast a black male in the lead role. He survived the whole film only to be shot dead by militia group. That ending was purposely created to demonstrate that the series is a subversive critique of the capitalist system, which is also the only system proven to work without bringing about collapse to its host nation. That said, however, in capitalism some must win and some must therefore lose. Those who lose will have their brains eaten.

If they survive the angry mobs and zero-sum games of the economy, then they must look out for those such as the government who seek to “protect and serve.” If they mistake you for a zombie then you will be shot. This shows us the metaphorical power of the zombie mythos: by adopting the only method that works, we create vast masses of losers who have destroyed their own brains and now seek to destroy yours. No wonder Scott Fitzgerald summed up human existence with “So we beat on, boats against the current, borne back ceaselessly into the past.”

26 thoughts on “Why Zombies Eat Brains”