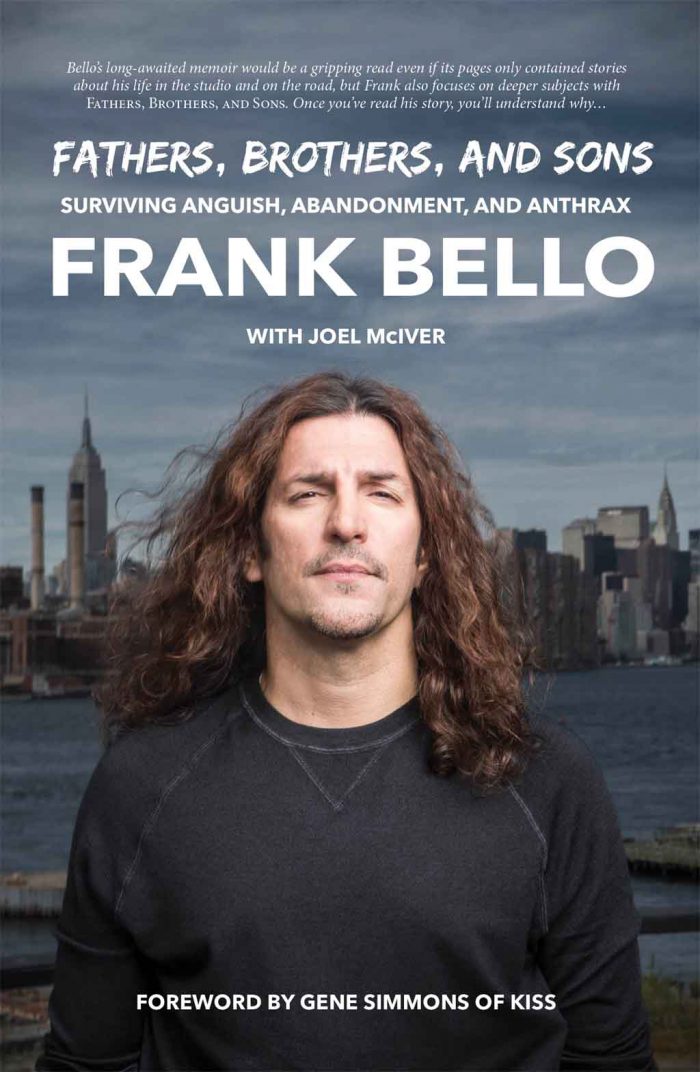 As he tells early in the book, Mr Bello started out life in a normal middle class home, but then ended up in poverty and eventually living with relatives after his father left the family. This manifested in him an anger problem which he talks up but does not appear too frequently in his private life.

Instead, Bello comes across as a man desperately in search of purpose and a tribe that will take him in, and there he finds Anthrax, the New York speed metal band with 1970s influences that nonetheless cranked out some good music and contributed to the science of (repetitive downstroke) riffcraft, before moving on to cinema roles.

Again, with all this creative art, you can see that it’s all for one, right? Acting is just like jamming in a band. It all serves the song or the play or the movie. Ask yourself what is at the end of it all. What happens then, and what are you left with? Are you left with a scene that works? Whatever you do with that moment is what remains — there are no retakes, it’s just you just doing it. (187)

Co-written by Joel McIver, who I interviewed sometime back in 2013, this book moves along ably because he captures the voice of his subject and uses it to explain all of the anecdotes as related to a central theme. This means that you can read Fathers, Brothers, and Sons: Surviving Anguish, Abandonment, and Anthrax like one of those mystery novels with cats, recipes, and vacation destinations in them.

On the other hand, the theme is a bit forced because Bello does not seem angry so much as lost except for his love of metal, and that might be a better theme here: society can fail you, and your family can fail you, but if you have something that you want to get out of bed to do, you will get somewhere significant while everyone else treads water.

Thank God I had a loving family, even if it wasn’t the standard dad plus mom plus kids, because a lot of people don’t have that, and I’m very thankful. That’s why family is my foundation, and it always will be.

I want my son to have that foundation, too, and all fathers should know that, if they ever think of cheating or leaving their family. Think about what it does to your children. Think about what you’re doing. You’re pulling the rug away and letting them fall to the depths. Your child doesn’t know why this is happening, and it’s so fucking unfair. When he finally hits the bottom, he has to build some kind of foundation for himself, and that poor kid is scraping to find anything and climb on top of it and get that foundation to be himself. Now that’s his journey, to learn about himself because of what happened. (203)

If the book has a weakness, it is relatively low metal content except for the stuff that we could find anywhere else. The personalities are interesting, sure, but we do not hear much about the influences on Anthrax or how they came together on their sound and approach.

To fans, much of that is more interesting than the personality aspects of the band, although that can also be worked in fairly easily. Bello tells a story we know from many musicians: home life was a question mark, so they gravitated toward some area where they could have power, and found others who felt the same way.

Entertainers want acknowledgement; we want the spotlight; that’s why I play the stage. I love the feeling that I get of being one with the crowd. There’s no drug like it, which is why we in Anthrax stayed pretty much straight and narrow. There’s no drug that can produce that feeling. To this day, when you take that first step on stage, and you know you have the songs, and if you feel confident and competent as a musician, there’s no feeling like it.

When that happens, I say to myself, “Watch this!” because I have to impress myself. I have to improve on the last show I played, and I tell myself how lucky I am to be able to do this, so I gotta bring it to another level this time. It’s a total addiction and I love every part of it. (33)

On the other hand, McIver and Bello do a good job of making you feel like you know Frank Bello at the end of this book. If I finished this book and went down to the corner store and there he was, there would be this larger-than-life personality with whom I would feel comfortable jumping into conversation.

It brings out the best of the guy as well. We feel his doubt and anguish over a missing father; we just about scream when another tragic death happens (no spoilers); we cheer for his stumbling through it all to end up in Anthrax, Helmet, and a few movies that your cinemaphile friends likely know about.

If you ask this reader, the most exciting part of this book is the early years when he is scrimping and saving to go touring with Anthrax, and they are trying to create something that is not yet known, forcing them to come up against doubt and emptiness once again.

Luckily Bello has plenty of praise for what I consider the most interesting Anthrax album, Persistence of Time, and talks about the personalities in the band and related speed metal bands enough to make them come alive. The theme just caps it off, and makes you want see this guy succeed.

Luckily he did, and wherever you are, you are probably less than a mile from an Anthrax album, propelled for most of their career by the bass work of Frank Bello. Like many metalheads, he named his demons and overcame them, even if the scars and rage live on.