A longstanding force in high-speed, atonal American death metal, DEEDS OF FLESH have deep roots in the exploration of the technical and musical limitations of these strident sounds. This has ranged from the ultra-deep, twisted morass of their earliest rumblings to the streamlined approach they have made their own within the last ten years as displayed on such late-period minor classics as Mark of the Legion. The most recent disc has shown a willingness to develop this sound — and themselves — even further, with a total enthusiasm that explains why they remain one of the most steadfast acts of quality anywhere in the genre.

How did DEEDS OF FLESH form, and what were your influences? What made you choose to be a death metal band, at a time when alternative and punk were much bigger?

Jacoby and myself started DEEDS OF FLESH in 1993. Joey was already in another band with Jacoby and that’s how he fits in the picture. At the time we thought the death/extreme metal genre could be a bit more aggressive and technical so we formed the band based on that over-the-top style of writing with odd counts and tempo changes. Our main influences were speed metal bands from the 80s and death metal from the early 90s.

Members of DEEDS OF FLESH started out in CHARLIE CHRIST, which seemed to be influenced more by DEATH and MORBID ANGEL, but with the first DEEDS OF FLESH EP, a new style — more like SUFFOCATION or Cannibal Corpse — came about. That lasted for another LP, and then a new style, more technical and weird, emerged. What was responsible for these evolutions?

With the first three CDs especially, we wanted to constantly challenge ourselves as far as writing new material goes and the technical level. In particular, Inbreeding the Anthropophagi.

What pushed you toward a longer, more streamlined approach to songwriting after Inbreeding the Anthropophagi?

With Path of the Weakening we were experimenting with a more dark sounding style songwriting with a lot of feel and emotion. This style was then used on all succeeding releases, but also combining the technicality as well.

Have the values of metal music changed from the early 90s? How and why?

Oh ya, I have seen it go from where in the 90s it was who has the fastest drummer and deepest vocals to where we are now where killer guitar work has come back around, which I like, haha.

I actually am trying to add much more theory to my skills to bring new sounds and elements. It definitely helps and opens many new doors. Nothing more killer then falling upon a new scale or pattern.

Do you favor the use of “real” violence or that of fantastic violence when constructing lyrical concepts, and why?

All our CDs with exception of the newest CD deals with the darker side of the human condition and tragedy and all lyrics are factual. The new CD is more of a concept CD based on future events.

When HELLHAMMER said, “Only Death is Real,” it launched legions of death metal and grindcore bands who showed us the grim structure of reality hidden underneath its appearance and our social judgments that gloss over negative things. Where does metal go from there? Is metal “rebellion music” or “protest rock,” or is it trying to uncover for us new possibilities in life?

I think many bands have great ideas for lyrics and concepts and metal in all forms really is very widely open to really any subject matter. Doesn’t always have to deal with death and being bummed out, haha.

Some have said that rock music is about individualism, or escaping the rules of society and nature to do whatever the individual wants to do. However, others have pointed out that death metal seems to suggest the rules of nature triumph over both individual and society. Where is DEEDS OF FLESH on the spectrum between these extremes?

Ah, nature will always win. Reduced to Ashes hits that concept. Men are but mere cells in the big picture.

As our mother earth is a mere speck in the sunbeam in the illimitable universe, so man himself is but a tiny grain of protoplasm in the perishable framework of organic nature. [This] clearly indicates the true place of man in nature, but it dissipates the prevalent illusion of man’s supreme importance and the arrogance with which he sets himself apart from the illimitable universe and exalts himself to the position of its most valuable element.

It has been observed that death metal and black metal use “narrative” composition, where a series of riffs form a sort of poem that tells a story about a change in states of mind. Is this reflected in your songwriting at all?

Yes, I always try to have the songs tell a story and sound unique from each other. 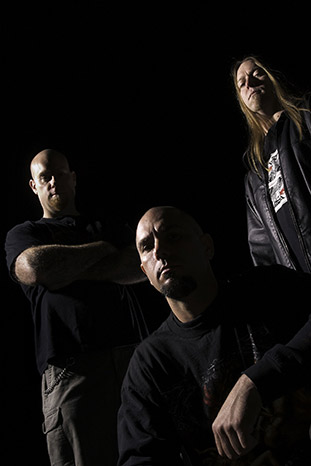 After SUFFOCATION clones had their day in the early-to-mid 90s, what musical methods did DEEDS OF FLESH pursue to differentiate themselves from lesser bands?

We have always stuck with our style of songwriting since we started. We have only added new elements to make a broader sound.

I don’t think the views on the world for metal fans are inspired by the music. I’m glad you don’t hear bands giving political points of view. That’s the last thing I would ever want to see happen.

Is man a noble beast or a fallen angel, and what does that say about the means he employs in pursuing his ends?

Noble beast, as on the cover for Of What’s to Come, which is actually a representation of man in the future and the challenges faced.

Is it important for death metal to be a genre of “respectable” skills, one that outsiders may not enjoy but can appreciate for its creative force?

You see so many different types of styles now mixed in with the genre. Metal is probably the most open style of music as far as experimentation. Sky’s the limit basically.

You now you have so many variations: death, extreme, black, progressive. I remember in the 80s when progressive just meant you had a keyboard, haha. I think it should just all fall under metal.

I don’t think so; the way a person writes is almost like a thumbprint, no two are alike. Everyone is unique in their own way.

Do you think it generally common for fans of death metal to be otherwise “normal” people?

Of course, I have been around plenty of metalheads who are way more sane then most humans out there.

How much guitar overdubbing and harmonization do you do in the studio? Is layering a necessity for the DEEDS formula to work properly? 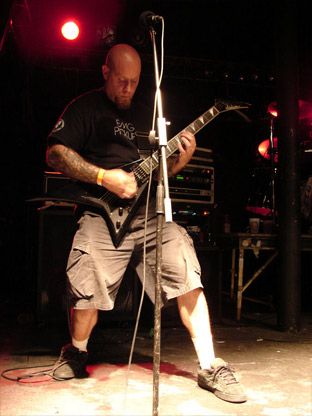 We lay one track per side and leads, always have recorded this way. We are doing a lot more overwriting on the new CD compared to our previous CDs for sure. With the addition of Sean Southern, our lead guitarist, we have really gotten into the guitar work, and we can’t say enough about Erlend’s tracks on bass.

Will any lead guitar make an appearance on older tracks in a live setting now that you’ve established it as part of your vocabulary?

No, we will leave those songs as they were written, but I’ll tell you I wish I would have approached the writing style as a four piece rather then a three piece if I could turn back time.

In my view, Of What’s to Come is a masterpiece that unites your past with a future direction I can’t quite figure out. Were there additional influences or developments to your style? Where do you go from here?

I definitely agree with that, mixing the old style with the new, more guitar-oriented style. The main difference is the addition of lead work and really getting more involved on the overwriting and harmonies since we will always be a four piece from now on. We will never go back to being a three piece. Since Of What’s to Come was our first in the new concept lyrically and in showing the new direction we are headed, everyone can expect more of the same but to the next level. Thanx a lot for the interview and support from everyone reading. See you on the road!!!

What makes you think that human beings are sentient and aware? There’s no evidence for it. Human beings never think for themselves, they find it too uncomfortable. For the most part, members of our species simply repeat what they are told — and become upset if they are exposed to any different view. The characteristic human trait is not awareness but conformity, and the characteristic result is religious warfare. Other animals fight for territory or food; but, uniquely in the animal kingdom, human beings fight for their “beliefs.” The reason is that beliefs guide behavior, which has evolutionary importance among human beings. But at a time when our behavior may well lead us to extinction, I see no reason to assume we have any awareness at all. We are stubborn, self-destructive conformists. Any other view of our species is a self-congratulatory delusion.