the anus.com metal development team was lucky to catch lori bravo during a break from work with her new band, Raped. she was kind enough to consent to an off-the-cuff interview which had some remarkable results.

as those who are fans of early death metal know, lori and her band nuclear death were instrumental in developing the genre in its early days. still carrying touches of thrash from the previous generation, she and her bandmates forged forward with a unique and devastating style of music. read on to learn what inflames her passion and willpower toward the making of metal.

Nuclear Death sounded to me like it descended halfway from the progressive extremist speed metal (“thrash”) of the previous decade, mixing that with its fundamentally deathy influence. If you could name something that you’d heard in the time leading up to the creation of the nuclear death works, what influenced you the most? 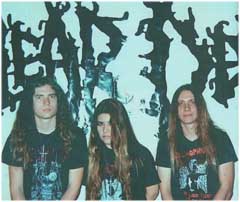 What art do you enjoy outside of metal?

Do you consider art to have relative grades of complexity?

Of course…but I also….believe the most simplest of lines can be most complex in nature.

Is your current band metal, or a metal fusion? i ask because many metal artists choose after an underground success to turn to the mainstream somewhat, mostly looking for new worlds to conquer.

What do you think about drugs, group sex and fascism?

Drugs are how we as a society seem to cope…I mean EVERYBODY’S on SOMETHING!!!Group sex is great…do it SAFELY….I am in the sex business..I strip….SAFTEY..PEOPLE….I CAN’T STRESS THAT POINT ENOUGH!!!Fascism in shit…but it is a big part of life…..I don’t think it is going to go away…so we,as artists,need to address the issue and alert the public on how much it ruins us internally and externally as many times as we can write a song ,paint a canvas, make a film or make a statement!

If you saw a black spot on a purely white wall, would you consider the wall to have an entrance, or the spot to have a boundary?

Entrance…I don’t beleive in boundaries…that is limited to me…I don’t like limits!!!!

What in your mind are the usefulness of these states: caprice and serendipity?

I Love impulsiveness in all things!!!! Spur of the moment……A whim of change….some of the best things are built from this lovely little spurt!Beautiful ‘accidents’…..serendipity is how I have managed to write every fucking thing that is good and paint a canvas that is worth viewing!!!!! I am a creative FUCKUP!!! 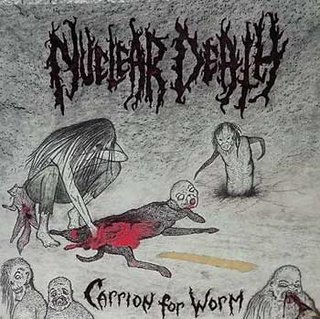 If Steve and I did another…I think it would be an in your face muse….RAPED is the result of what ND spawned.

If you had four minutes to give advice to a young metal band, it might be…?

Don’t sign anything without a lawyer, never compromise your principles, be yourselves, listen to your inner voices and take NO shit!!!!

What do you think about commerce, morality and the holiday of Easter?

I like the shorter song format with some bands, offhandedly naming Carcass and DRI, as it allows a fragment of a consciousness to momentarily express itself and vanish, where a full song might have to artificially include other subject matter to flesh out the shit. Then again, if you write your lyrics when wasted or careless, what flows might be pure subconscious dialogue and therefore might be effective. It seemed to me some study went into the Nuclear Death lyrics, no matter how hasty their creation. What sorts of ideas and systems of thought were influencing you at the time?

What do you think of capitalism, Christianity and Zionism?

Good and bad….I hate corporate-owned anything…but what are you going to do….do it yourself and put it on the net……christianity has been so fucking twisted and raped of its origins and beliefs,honestly,I think Christ would want to kill those fuckers,I believe every people should be able to ‘go home’…we all deserve our place.

Are you a large fan of any mainstream media?

I am pop cultured,you know? I like anything that I find interesting!

Often relationships in bands are as stressed as two cops dating. Do you have any advice in the most general sense in this area?

Do you own guns or dogs, and what kind of vehicle do you drive? Do you see these questions as destructive to the persona of a metal artist and therefore not worth answering? I hope so, but if not let me know. I want one of the new glock .357s to take out that pesky streetlight.

The aura combined of artistic form and content that is metaphorically relevant in a wrenching evocation of the sickness and desires of the current time, if present intelligently, can form the basis for powerful metal. Do these ideas “strike a chord” with any of your own?

I think we are a highly intelligent form of music…..we present to the listener what one may or may not want to face.Look…if you have shit lyrics…I don’t care how great the music is…..I won’t give you a second thought.

Do you have plans to write a book?

Yes……I have poetry,as well as a tell-all in the worx

If i were a gangbanger, anytime I shot someone, I’d say “you’d better hope for reincarnation!” Do you think reincarnation is likely, or is it another for the “wishful thinking” file?

I think it is bullshit…..This is MY fucking unique soul..when I die that is it!

Have you heard Burzum, Dead Brain Cells or Absurd?

Because you are too intelligent for most dumbfuck metal-heads…..fuck ’em…you RULE!!!!

Do you visit any bulletin boards, chat rooms or use an instant messenger? 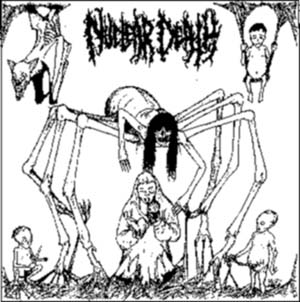 Is Saddam Hussein a CIA plant?

Could be…..dunno….I think he is an android.

If you had no limitations and could make any music you would choose, how would your music differ?

Listen to RAPED….I have no limitations!!!!I know what I like.

What makes Arizona for you an attractive place of residence? After I drove through I considered moving, as it had a laid backness to the city.

Many thanks for any answers you can do. Some of these questions will be unanswerable, but I have designed them based on your other interview so that you will have fun with them, I hope. I will send you finished copy and we’ll cut any that don’t succeed. Hails and vomits…

..Thanx…I had a great time with your interview…….one of the best I have gotten in a while…..actually, I found ALL answerable!!!! I can rap for hours,Love…….New Nuclear Death/RAPED contact is my Email!!!!

The Christian concept of a god—the god as the patron of the sick, the god as a spinner of cobwebs, the god as a spirit—is one of the most corrupt concepts that has ever been set up in the world: it probably touches low-water mark in the ebbing evolution of the god-type. God degenerated into the contradiction of life. Instead of being its transfiguration and eternal Yea! In him war is declared on life, on nature, on the will to live! God becomes the formula for every slander upon the “here and now,” and for every lie about the “beyond”! In him nothingness is deified, and the will to nothingness is made holy! . . .