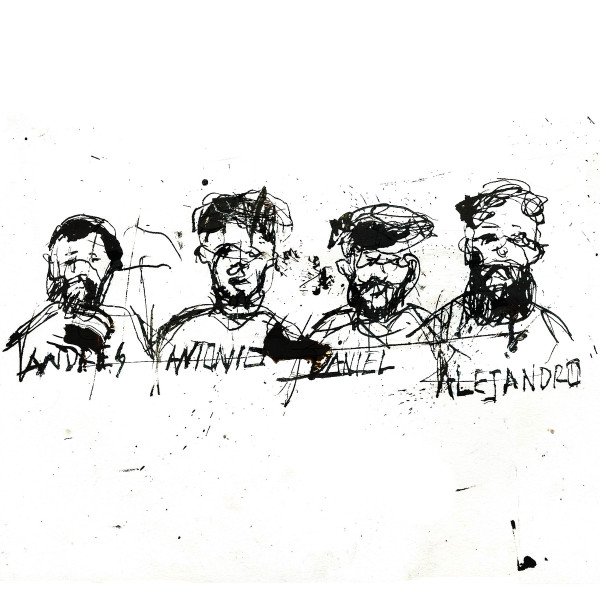 We reviewed Personal Device Microorganismos del Mal in Sadistic Metal Reviews 05-19-14 and found this to be an excellent late thrash album inspired by some of the more technical hardcore punk out there. At that point, we wanted to learn more, so wrote to the band with a short interview some months later. They were generous with their time and able to share their answers about music, life, micro-organisms, thrash and world destruction.

We go way back as a band.

We started up in 2006 as UNHEILBAR (German: incurable), playing what you may call “classic thrash.” At that point we were looking up to the Bay Area scene, trying to mix it up with some German influences: we were trying to capture the essence of such bands as Metallica, Anthrax, Exodus, Slayer, Sacred Reich, Testament, and so on. Then, circa 2009, we started exploring a fresher sound with crossover: Suicidal Tendencies, Nuclear Assault, Ratos de Porao, Billy Milano’s S.O.D and M.O.D. At that point, we made a switch from a purely thrash project to a more comprehensible one: mixing both old school thrash with some 80s hardcore punk (Minor Threat, Black Flag, Bad Brains, Batallion of Saints). With this new approach came along our changing the name of the band to Personal Device in 2013. To us it means the constant struggle to find oneself, one’s tools to get by. Plus, it sounds like something about to explode.

Are you a metal band? A punk band? A crossover thrash band?

Our music is based on Metal but we incorporate elements of hardcore punk sounds, which kinda makes us a crossover thrash band. We often refer to ourselves as thrash-punk, but we don’t care much about labeling us in a certain way. We are comfortable being refered to as a Thrash Band. If you want to Mosh, if you are looking forward to heavy riff-orientated, fast pace, songs, then Personal Device is for you.

Much of your sound seems like a better-played vision of what people were doing in the 1980s. What made you pick up this banner? Have you added anything to it that’s new? What have you added that’s all your own?

While it’s true that we draw heavy influences from the so called old-school 80s scenes of thrash and punk, we don’t consider Personal Device to be a mere “revival band.” You could that we are not nostalgic, we aim to produce our own sound, though we can’t deny our great debt to the old school. Even so, we also like the New Wave of Thrash Metal bands, it’s just that we find it somehow pointless if your entire music is devoted to yell BRING 80s THRASH BACK.

What inspires your lyrics, and is this important in the style of music that you’re making?

Our lyrics deal with the condition of modern circumstances, living in big dehumanized cities. Nonetheless, you may find some sporadic nonesense as well as constant references to Colombia. We also have one or two jams dedicated to thrash music, a couple of thrash-party anthems if you will.

Where did you record Microorganismos del Mal, and were these new songs or a collection of songs? Did you use any special techniques to get the very crisp sound on the recording?

After signing with our friends at the independent label Gomorrah Records, we went to the 4Cuartos studio in Bogotá D.C. We recorded our first full-length album Microorganismos del Mal (Spanish for Microorganisms of Evil) which is the consecration of eight years worth of work. There are 10 tracks in it: five of them are re-recordings of songs we had already recorded as Unheilbar, the other five are original compositions. The recording was pretty standard for a heavy metal band; we worked with two great sound engineers, Juan Carlos Bravo and Alejandro Veloza.

Can you tell us something about the concept behind the album?

The concept behind Microorganismos del Mal deals with our city, Bogotá, and with the meaning of Thrash and Punk.: a reflection on how important it is for us to live the whole experience of making music.

When did you sign to Gomorrah Records, and what made you choose this label?

We signed with Gomorrah around November 2013, and it was not much of a deal at the time of doing it since there was, and still there is, a friendship in between. So they just told us that they wanted us to release an album produced by them and we never doubted it.

Are you going to go on tour now, record more material, or both?

For sure we are planning to go on tour. There is the possibility to self manage a tour around the US more specifically in Florida. And also we have been looking for rock venues around South America where we could play. All this under a “do it yourself” philosophy. About new recordings, right now we are working on new material, and some of those songs were recorded in collaboration with sound engineering and visual arts students, with the idea of launching a live session

Do you think it’s hard for a band to get recognized in the underground now? How do you think people will find you?

It is definitely hard to get recognition when you play Thrash. Especially when you live in Colombia, but we think it is a matter of time and hard work. We have been playing together for around eight years and you can see how things start to happen when you are consistent. So in this moment the best way to be recognized its playing and having approaches with different people and all the movements that are concerned about music and keeping the scene alive.

What’s the most important aspect of a song for you, lyrics, riffs, structure or imagery?

For us, all those aspects are important. We like to come up with songs that have coherence between sound and lyrics, and that involves off course, structure and imagery.

If people want to learn more about Personal Device, how can they do so?

There is no doubt the best way to learn about a band is going to their concerts, buying their albums, reading the interviews, reviews and all that stuff. So taking into account we are a band…well people just can start by doing it. A good place to go first would be our bandcamp page, personaldevice.bandcamp.com.