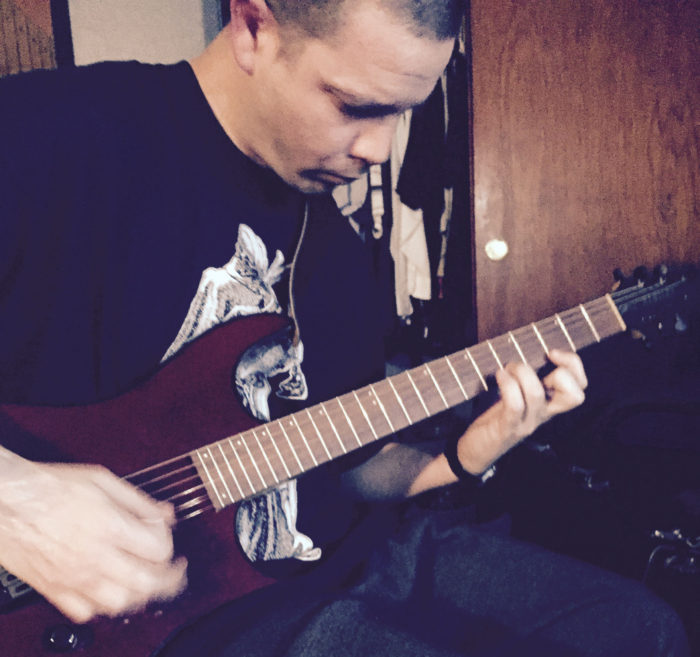 In the years after underground metal imploded and became assimilated by standard teenage rock music, metal musicians have been reaching out toward styles which avoid the stereotypical elements of the underground. Instead, they are going back to heavy metal, and re-inventing it with the influences that shaped underground metal, such as Gothic rock, melodic hardcore punk and guitar-oriented rock. If you can imagine Joe Satriani, Glenn Danzig, Morrisey and Carl McCoy jamming inside an underground fire base in the midst of an apocalyptic wasteland, that is approximately what newcomers Rotten Copper sound like. We took a few minutes to talk to frontman Stephen Cefala (Dawning, Nothing Left, Pale Existence) about this new band and where it is going, at least before the final war…

You are well-known in the underground for your esoteric works, but never got the big-name recognition that other bands got. Why did you choose to go with a more popular style of music, and did you keep the underground “core” or content of your work?

I did this for the challenge of it. Doing one genre to a T is too easy. Trying to blend rock and metal styles of Elvis through the 60s and Cream, towards the 70s and Iron Butterfly, Riding Lighting in the 80s, and into How the Gods Killed and certain Covenants in the 90s. These eras need to blend, instead of being segmented. Over-genre-izing has caused retardation of the art form. The main thing about my style is that its dark and there are competing harmonies, melodies, and themes which go together but also battle each other too, as if questioning or competing against each other.

What does the name Rotten Copper mean?

A few related things such as: societal corrosion, spent shells from world wars, and the abuse of power by authorizes (e.g. government) in general.

You have pioneered a kind of anarchist-traditionalist political nexus in your writings. What is this, and how does it inform your vision of the world that you reveal in your music?

Throughout history, humanity is a fail because it begins free and devolves into communism eventually, until revolution starts freedom over again.

The lesson repeats over and over like a bad Saturday school session for rejects who just never learn.

If you could escape this system, what would your alternative look like?

The system I favor is actually mercantilism. Mercantilism is based on the idea that tangible hard assets trump InfoTech/banking/fiat. In effect: heavy industry and agriculture, as well as bartering/trading are given priority in a mercantilist system, which creates the broadest prosperity historically, as it provides jobs for the common man. Stability of industries and the preservation of capital is important in such a system, rather than pressing for false debt-based economic growth (which ends in booms-peaks-collapses).

Where was the album recorded, who produced and mixed it, and how long did it take?

A best friend of mine since high school (back in the day) has a recording studio near Cupertino that I go to. This sound engineer, called Freematik, has been on many far out adventures with me over the years (to raves and going to the forest and such). He has a perspective on my music since he and I have known each other for so long – since back in the day where Lorin (Bassnectar), Bud Burke, and old friends like that were around. One interesting time was when we did sound for Screaming Jay Hawkins and Willie Dixon at a mansion in Santa Cruz where they had man made waterfalls, a Hansel and Gretel ginger bread house, a train that went around the property and such.

Writing and recording this album took me from the time of the election until now. Writing better riffs is easy when you are secluded. I switched from a Japanese Charvel to using only Warlocks. Warlocks provided the inspiration necessary, because they look and sound other worldly. Warlocks ring out nicely (with grit) and they also bring out your palm muting.

The recordings which really interest me the most are still Dawning and Rotten Copper. There are other bands I were in that I feel brought a lot to the table. However, it can be difficult to find the right time and place to release some recordings. That’s Ok because sometimes things need to age, or be kept for personal collection.

In some ways, the Dawning Live on KFJC 89.7 recording from back in the late 90s is currently the most underappreciated recording that I have been a part of. Drone/doom band Noothgrush described it as “untouchable” in an interview:

I could name bands all day, but to me, one of the best was Dawning. They were a local doom band. They went on to record an album, I’m not sure if it ever got released. All I remember is that their KFJC performance was untouchable. They also did a one-off performance as a band called Doomed Horn, which was more in the viking style.


Dawning – Live At KFJC – “Kingdom Of The Celestial Forest”

Two separate record companies contacted us to put out an LP as result of that. Pale Existence actually ended up doing a vinyl Exhumed split with one of them. Dawning had personnel issues that messed things up. All of the master tapes are missing; some vanished while on magnetic tape, and others were lost when my master DATs were abandoned in a storage unit and forgotten. Still some of the (best) songs are lost from that. Fans archived what they had and helped salvage it. Having that happen was a really amazing experience for me and energized me in songwriting after that point.

Is there ever going to be a vending machine in downtown San Jose where we can buy copies of everything you have ever released? Do you have a complete discography anywhere?

What would really make a lot of cash would be horse racing ticket vending machines. XXL flavored condom machines (which that kind is not even made) and machines with Heineken in cans  (like they had in the hostels in Amsterdam).

How do you describe the music on this album? How is it different from what you have done in the past?

I wanted to take a look at how it is often the case that fantasy horror and wasteland apocalypse films of the 80s in many ways accurately depict a failing society in modern reality. The world is awash in violence and societal decay throughout much of the globe. When you go back and watch a movie like Cyborg with Jean-Claude Van Damme for instance, many of the things in that film are going on today in certain parts of the world.

What are you going to do, musically and personally, after this?

Flamenco and classical guitar for simple enjoyment. Besides my day-job, horseracing (which I am successful at), the stock market, competitive bowling (I won my first 2k when I was 17 years old), running, and weight-lifting.

What happened to metal between 1995 and the present? It seems like something went wrong.

Yes. All the people who became metal heads because they were rejects in school in the 90s, and who had embraced themselves as misfits suddenly decided that they were the cool people. Then they decided to form a super clicky over genre-ized “scene” and prevent the actual cool people (who were also misfits but were individualistic) from participating in the bands and concerts because they did not kiss ass and have the proper “image” or conform enough to the new hierarchy. This is similar to how communism works, from what my chef friend tells me he saw in Vietnam with the Viet Cong.

There is a reason why 90s DM bands like the early works of Grave, Dismember, Asphyx, Disincarnate, Krabathor, and My Dying Bride stuff have stood the test of time. It’s because they were setting the sound, not copying it. Overall, those bands were anti-social compared to today’s bands. Those bands capped their own popularity by playing music they knew would appeal only to the few, not the many. Like a Nietzsche book, that created a deeper connection to the chosen few, whereas today’s watered down bland tunes are meant to have mass appeal.

Why did you release this album for free? Do people actually value and defend anything that they get for free?

This album is free because I am sick of government and corporations. The land, making love, being in love, the air , the water . All these things are free.

The government and the corporations hoard them and resell them to us in order to enslave us. They also invert our values to cause dependency.

How can people keep track of what you have done in the past and what you are doing in the future?

Mostly on Bandcamp or by Googling me. Not sure I want to be in public eye in the future since we are moving towards living in a leftist totalitarian state which subsidizes the leftists while persecuting anyone who doesn’t suck the government tit.