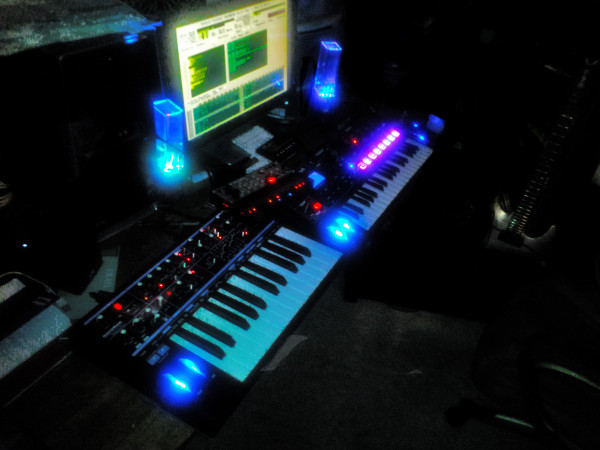 Metal comprises both a concrete format and an idea. That idea, like pollen on the winds of a tempest, spreads far beyond its original home and takes root in other landscapes. One venturer in the recent hybrid style of metal-influenced cosmic ambient is Khand, whose shadowy personage spoke to us through an encrypted Skype communication over a private anonymous “darknet” network within the internet.

Where does the name Khand come from and what does it symbolize to you?

The name Khand comes from The Lord of the Rings. It is a mysterious land southeast of Mordor. Tolkien didn’t say much about Khand so my interest was piqued. Given the frequent usage of The Lord of the Rings band names it was refreshing to see one that had not been used at the time. Out of the whole universe Tolkien created, Khand still remained mysterious. That notion is also influential on the mindset I take in creating Khand’s music, regarding fantasy and science fiction.

What’s the name of this upcoming Khand release and when will it be out, and where will we be able to get it?

The name of the release has not been decided yet. That is usually the last thing I come up with after everything is recorded and mixed. That said, the song titles are completed for this release, so once they are finalized and ready to go, it will give me a better general idea of what to ultimately call the whole thing. The release will be available to download for free, most likely on the wonderful HiArcTow creative commons page that has supported myself and others throughout the years. Beyond that, I ultimately hope to release this on some sort of physical format… whether it be cassette again, CD, or even vinyl.

Will there be any differences to past Khand work? How do you see the band evolving with this release?

There are a number of differences with this newer material. I have always felt that this project has lacked some sort of direction and organization; it was as if the past two releases were a bunch of random songs thrown together with no real end in sight. With this release, I have decided to focus on one idea only. The release will be a chronology of events that take place during humanity’s first trip to Mars. It seems that we will most likely see this venture at some point in our lifetime, so the imagination runs rampant with all the possible scenarios we may face. Musically speaking, I have upgraded my equipment and have decided to use some newer synth sounds for this release. Everything will have a “spacey” feel per se, taking the listener on a trip with the crew to Mars. These recordings will not have any medieval/fantasy inspiration like some of my past works, though I am currently working on a few songs in that regard which may end up being used as a demo or split release of some sort.

What other artists are you listening to / reading / watching / observing during this time?

Art exists all around us; you just have to look for it. As an inspiration for this release, I am obviously looking up to the night sky, imagining what the future holds for the human race. There is no greater influence to me than that of nature and science itself, as it is the only real constant we know of. We are mere peons on this bloody planet, yet our potential is limitless if we free ourselves of bonds. I’ve always felt that artists and musicians see the world differently than most. During this time, there have been a number of artists or musicians which have been inspirational. The biggest influences for the music of this will be that of Robert Fripp, Brian Eno, Varg Vikernes, Tangerine Dream, Kraftwerk, John Carpenter, and Vangelis. Though not really a prominent influence on this release’s music itself, I also feel certain classical music has a profound influence on our perception of the emotions that coincide within music, so there has been inspiration there as well.

Do you think there’s a strong community for metal transplants into ambient and atmospheric music with epic themes?

Yes and no. It seems there should be more of a community than there currently is though it certainly feels like it has started to pick up steam. In my opinion, there is a strong correlation between ambient/ atmospheric music and metal. Both have the ability to create worlds within worlds, something more than most other kinds of music can say. They dig deeper into the human psyche than your average pop song. The possibilities with ambient music are endless. Like metal, there are many different styles and takes on the sub genre. So as one door opens, another swings open. I always tell people that it is good to start with the classics. Like those of metal, the forefathers of ambient music had laid the foundation and built the canvas. It is our duty to pay them respects and listen to the worlds they’ve created and find inspiration in their limitless contributions to the music we know and love.

One thought on “Interview with Khand”