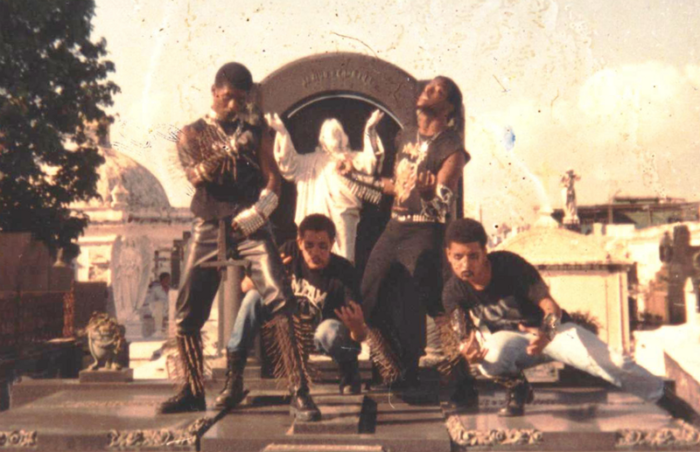 Highlights and commentary are below. The entire interview can be read on the Nuclear War Now Forum!

2. MYSTIFIER is one of the last non-nordic originators of modern Black
Metal still active (others being NECROMANTIA, IMPALED NAZARENE, MORTUARY
DRAPE for example), and in July 1999, is the 10th anniversary of MYSTIFIER.
What has changed in Black/Death Metal in those ten years MYSTIFIER has been
around?

– Years ago we fought for a decent Underground Metal scene free from racism,
capitalism, prejudice, ignorance and so on. Nowadays the scene is infected
with racists, politics, enviers, liars, nazi ones, etc. What a shame !! But,
I try to do my part for myself. I don’t believe in the youth of today. They
are feeble-minded ones !! Bands like GRAVELAND, BURZUM and others are a menace
for our Underground Metal Scene. If they live around Brazil, they would be
dead !! They are gothic babies !! Soon they will leave their masks fall down
and they will turn their back to Metal Scene and they will blaspheme against
us (The Metal Masters – the few, the proud!!).

Mystifier attacked others in the street and would probably attempt to emasculate Varg Vikernes through prison rape:

4. How old were you in ’89? What was the reaction of people when they got to
know that you were playing Black/Death Metal? Were there a lot of people into
music like you were?

– We were around 17/19 years old and we played for 50/100 people around Brazil
in that time. We were few, but we were strong and conscious ones!! We fought
against punks and skinheads. Nowadays the punks are our friends and the
skinheads are dead!!. A lot of people feared us due to our violence against
our antagonists. A german guy friend of mine, told me that many Black Metal
guys of today are afraid to face the skinheads there (aahhha..hha…
-chickens !!). Ooh, where’s the attitude?!? I told him that they should call
the god of cowardice (the so called Odin’s disciple lady virkgayrnes (that bad
girl who sings in BURZUM) to help them, because he is specialized on to stab
men on their back!! – aahha..haha..).

10. What do you think of the following bands:

-GOATPENIS(rip?): aah..ha..ahha. These guys are comics !! They remind me
those nazi gothic (?!?!) wimps who are coming from Scandinavian. Years
ago, they played a grinding shitty crossover ala napalm death, carcass,
s.o.d. and anthanx. When they read that bullshit capitalistic magazine
with Euronymous and his children speaking an amount of shit, they became
a nazi Black Metal band (aah..ha..hha..). Really, hitler can lick up
their asses and fuck them !! Now they are playing industrial music and
blaspheming against our Extreme Metal Musick (aahhaa..haa… – Fuck off
ass holes!!).

–GRAVELAND: aah..ha..hha… Please, stop man !! I’ll die with your
jokes!!. Really, hitler failed when march over Poland, because any
polish bitch was ripped by an aryan nazi soldier and gave birth to one
of those wimps who plays in this crap band. Read it: “It seems to me
that nothing would be more foolish than to re-establish the worship of
Wotan. Our old mythology ceased to be viable when christianity implanted
itself”. Beware!! You may be taken by force to a concentration camp!!
(aahhha…hha..).

Mystifier stated they wish to anally rape Scandinavians as they are Untermenschen compared to the Afro-Brazilian master race:

12. You’ve stated that you dislike bands like BURZUM and GRAVELAND,
which have some
views and beliefs strongly connected to fascism and even directly
national-socialism. Is there
any space for thoughts like this in the head of a Black Metal musician?

Beelzeebubth: Well, we are free in this world to do what we want to.
They are white and I am black. If they think I am inferior or stupid
because I am black…well, I hope, for their health, they stay so far
away as possible from me. I am a pacifist, but if the person offends me
or cross my way with stupidity, well, you know those things… (An eye
for an eye). My problem is that I want to war against racist ones, nazi
ones, capitalist ones and politic ones. Many Brazilian racist ones are
afraid of me. Really, I hate that kind of people and they shall hate me
too. About the question, If there is any space for thoughts like that in
the head of a Black Metal musician, oh, yeah! The one that they should
have in the ass, they have in the head. It is normal, mainly, if it came
from Scandinavian.

Mystifier proclaimed Norwegians ethnically unqualified to play metal, attacked the Slayer zine, care more for vocalizations than riffs, and lumped Mayhem and Burzum in with Cradle of Filth:

13. If I am not completely mistaken you are of African descent, right?
Has this been a problem
in any cases, concerning the style of music you are in? Some Norwegian
magazine stated
some years ago that MYSTIFIER would be one of the most false bands
because of you were not
white. What do you say about this?

Beelzeebubth – Norwegian magazines are not authorities to speak on
Extreme Metal Musick (Death Metal, Doom Metal or Black Metal). Maybe,
they are authorities to speak about new wave (like that bullshit band
called a-ha). What original musical style did norwegian musicians
create? Black Metal !?!? Sorry, no!! Norway has not any Metal
tradition!! Maybe, we can mention some great Norwegian Ancient Black
Metal Cults like Thy Abhorrent (Where’s that fuckin’ hooded guy called
Occultus?!? He isn’t nazi or racist, I guess..). They had produced a
fantastic Black Metal music with Heavy Metal parts and well done
arrangements and vocal lines. They weren’t Bathory or Venom clones like
their fellow countrymen. Ask to that teenager, who said we are the most
false band…(aahhha..haa.. – what a audacity !!?!?), if he knew bands
like Vulcano(Bra), Thy Abhorrent, Dead Conspiracy(Usa), Mutilator(Bra),
Malfeitor(Usa), Necrofago(Bra), Hellhouse(Usa), Expulser(Bra),
Sorcery(Swe), Sex Trash(Bra), Demoncy(Fin), Invoker(Bra) or
Damnation(Can) (!??!?!?). But, if you ask him about trendy bands like
burzum, graveland, cradle of filth, mayhem, and so on, he knows…

14. Do you accept racism if it is backed with reasonable arguments? Is
Brazil a racist country?

Beelzeebubth – No, I don’t. Reasonable!! What is reasonable for you? To
do a concentration field and obligate the women to do sex with the
strongest men to continue the pure race!?!? To enslave the weak ones and
to kill the people who think different from you? It can be good for the
european youth, but for us (the young ones from the rest of the world),
that is very a little!!! We want more!! We want to change the world!!
Liberate it of all the diseases originating from of the capitalism,
catholicism , christianity, etc. A world without walls for the youth.
Yes, Brazil is a racist country too. There are many german, spanish,
italian descendents here. I don’t know what they are doing here !?!? I
hate them! They brought that plague from Europe. One of my goals is to
send them back to Europe.

Finally, Mystifier reject Darwin’s Theory of Evolution and would cannibalize Caucasians if given the opportunity similar to how African witch-doctors dismember albinos:

22. What about Social-Darwinism and “survival of the fittest”?

Beelzeebubth – Darwin was great in his theories about the evolution and
Natural Selection, but he failed about that survival of the fittest.
Don’t exist any superior people to gain wealth and power. The fall down
of the imperialism was the proof. If you think you are superior because
you are from a pure race, I will attack you, kill you and devour your
flesh with the survivors from your persecution (aahha..hahh..). Really,
EVOLUTION is the key for our existence in the earthly paradise. But, if
you think any god keeps all the secrets about our existence, you are a
meek and cannot inherit the earthly paradise (aahha..haa.. – go back!!).

Mystifer disparaging others as Nazis while advocating attacks on those they view as racially impure, anti-capitalism, criticism of Christianity as emasculating, and the seizure of the sub-humans’ land to benefit their own master race (lebensraum) show the band as highest order hypocrites. The pogroms of social justice warriors are little different from those of Tipper Gore’s Parents Music Resource Center, Communists, and Fascists. Furthermore, Mystifier’s desire to sodomize and cannibalize Varg Vikernes and Rob Darken suggests an extremely unhealthy envy of their creative superiors.