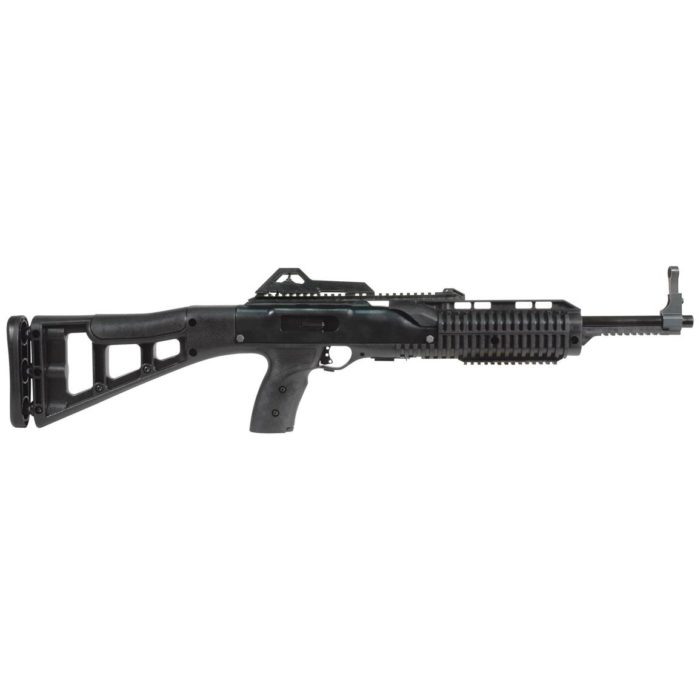 Why Hi Point?  They are cheap.  A lot of the metal parts are die-cast (think of the old matchbox cars) and the workmanship is… pedestrian; my carbine has numerous peening and tooling marks on the metal parts. They are 100% USA made.  They are reliable (all their firearms work on the simple blow back principle) and have a 100% no questions asked, fully transferable warranty.

Why not Hi Point?  They are uglier than a prolapsed hippopotamus rectum.  They are heavy.  The ergonomics give Soviet bloc weapons a run for their rubles on awkwardness.  Magazine capacity is limited unless you purchase the ludicrous Red Ball magazines.  The firearm gentry and elite look down their noses at Hi Points.  They are a bitch to field-strip, although Hi Point themselves recommend you just send the firearm to the factory every 3000 rounds or so for cleaning – they will even include a couple of new magazines when they send it back.

For new firearm users and for those looking for an excellent camping/truck weapon a Hi Point carbine is the perfect route; $250 seems to be an average going price.  Long guns are far easier to master than hand guns and pistol calibers through a 16” barrel have minimal felt recoil and thus prevents new shooters from learning the bad habits of anticipating and flinching.

The 4595 carbine I purchased uses the same .45 caliber ammunition as most of my pistols. It will feed ball or self-defense ammunition.  Like most modern ‘tactical’ firearms it has picatinny rails on every conceivable surface.

Taking it out to the forest for a test run I found that the magazine seats rather loosely.  However, it stayed seated. One should train from day one to insert magazines with authority and follow it up with a solid tap with the heel of your palm.  The charging handle was surprisingly stiff and requires a sharp rearward pull followed by a clean release for proper chambering.  As one would expect with cheap firearms, the trigger pull was long, heavy, and mushy and the re-set was dodgy and uncertain.  The factory aperture sight is fairly well done, although the radius of the peep hole is too small given the limited range and ballistics of the ammo, and was perfectly zeroed right out of the box. The ridiculous looking thick butt-stock along with the in-line design assure positive cheek-weld and allow for rapid target acquisition.  At 25 yards I had no problem putting an entire magazine into the cranial area of a silhouette target, and at 50 yards it was quite easy to keep all the rounds in the chest Q. Real-world accuracy is no problem with this firearm – if you want range accuracy you would be well-advised to get a carbine in the flatter shooting 9mm.

After some mag dumps and shooting drills, I attached a cheap-ass Russian optic to the top picatinny rail. Because the factory aperture sight mount is fantastically over-sized, I had to place the optic further forward than I prefer, but the aperture is low enough that it did not interfere with usage of the red-dot and the plastic rails seem durable and the optic fit snugly on the carbine.

On the underside of the hand-guard are more rails for a bi-pod (why bother?) and under the barrel are even more rails for the attachment of a flashlight which would make this carbine a good home-defense weapon.

The Hi Point carbine is a black metal firearm: it ignores needless aesthetics while embracing the form necessitated by function. Without extraneous ostentation it remains goal-oriented. While firearm hipsters with their $2000 AR might turn their noses up, the 4595 achieves results: reliably putting steel on target.