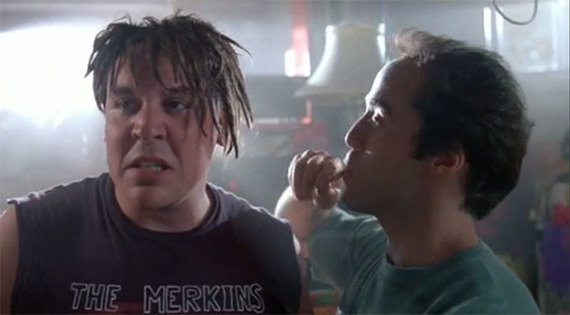 Cultural waves often start on college campuses, as was the case for the civil rights movement of the 1960s.  This is very well articulated here as PCU — its title serving as a double entendre of “Port Chester University” and “Politically Correct University” — comically documents a very strange happening that was taking place on liberal campuses across the country during the 90s.  At that time, the wild, epic frat house parties of yesteryear were being replaced by a countless number of cultural micro-factions warring for dominance and forever in opposition with one another.  The feminists denounced the oppression of the male gender, the minority identity groups protested the majority, and the hippies gathered and marched against the part of the omnivore that does not consume plants.

Though this climate was relegated to liberal college campuses at the time, it has since become the overall state of being in our American democracy. Some of the language used in the film is different (the feminists are called “womanysts” and want to end the “penisarchy” instead of the patriarchy) they’ve managed to masterfully articulate the majority of the protests groups we see flailing their arms on every hypersensitive news program today.  The film’s most clever moment comes when the main character describes a group of protesters he calls the “causeheads:”

These, Tom, are the Causeheads. They find a world-threatening issue and stick with it… for about a week.

Does anyone remember when that ridiculous documentary Kony 2012 was released and everyone on social media went ballistic, giving impassioned speeches about bringing justice to the African warlord who was allegedly recruiting child soldiers?  Or “Occupy Wall Street”when over the course of a year thousands of liberals took to the streets of downtown Manhattan to drop acid and unilaterally whine about economic corruption, only to see absolutely zero people held accountable for the financial collapse?  Or how about something more recent, when Antifa proclaimed a hostile government takeover billed as “Refuse Fascism” only for a few dozen people to show up on that cold November Fourth afternoon?  These groups could not have been more accurately portrayed under the “causehead” umbrella term as they are the same motley crew we now see throwing hissy fits over gender spectrums and fat shaming.

A precursor to the Alt-Right even appears in the film (albeit more neo-con than discord renegade) reminiscing of the days when college campuses were more to the tune of “white elitism,” though they are somehow in league with the movie’s villainous liberal college president who wants to devote an entire campus building to bi-sexual Asian studies. This was the only group in the movie that was somewhat nonsensical and out of character, yet it was not to the point of distraction as nearly every liberal bastardization of humanity is perfectly represented in all of their piss-dyed glory.  Interestingly, the heroes of this tale are those that oppose political correctness in all of its misery and all of its woe, with the main character “Droz” in many ways being the Donald Trump of the movie: a bold, overconfident renegade constantly opposing the tyrannical establishment of political correctness via goofy pranks and chaos.

When describing the a protest group to a visiting pre-frosh, Droz explains:

Ok, now it’s true, the majority of students today are so cravenly PC, they wouldn’t know a good time if it was sitting on their face, but there’s one thing that will always unite us and them. They’re young. They may not realize it yet. They’ve got the same raging hormones, the same self-destructive desire to get boldly trashed and wildly out of control. Look out that window! That’s not a protest! That is cry for help!

This can certainly be said for our current state of reality, that these maddened Antifa anarchists and disparaged “Men Going Their Own Way” NEETs are screaming to be saved, trapped in a world where nothing is fun anymore and everything is awful.  In PCU nearly all of the groups are divided against one another, constantly at war, constantly opposing something, never actually having fun or enjoying life.  In a dramatic and climatic speech to the campus, Droz proclaims:

It used to be us against them, now it’s us against us… We can do something about this… We can finally say… that when people are having a good time… we’re not gonna protest!

Right now college youths are demanding spaces safe from offensive speech, advocating for socialism, and are even convincing themselves that the capitalist Republican kids they’re violently clashing with are the reincarnation of Hitler’s Nazi army.  Should this spill out into society the way social justice warriors have from their college campus birthplaces we’re going to see a violent and destructive civil war here in America.

And for those of you “looking for the metal,” PCU makes an interesting use of some death metal-inspired pieces in its score.