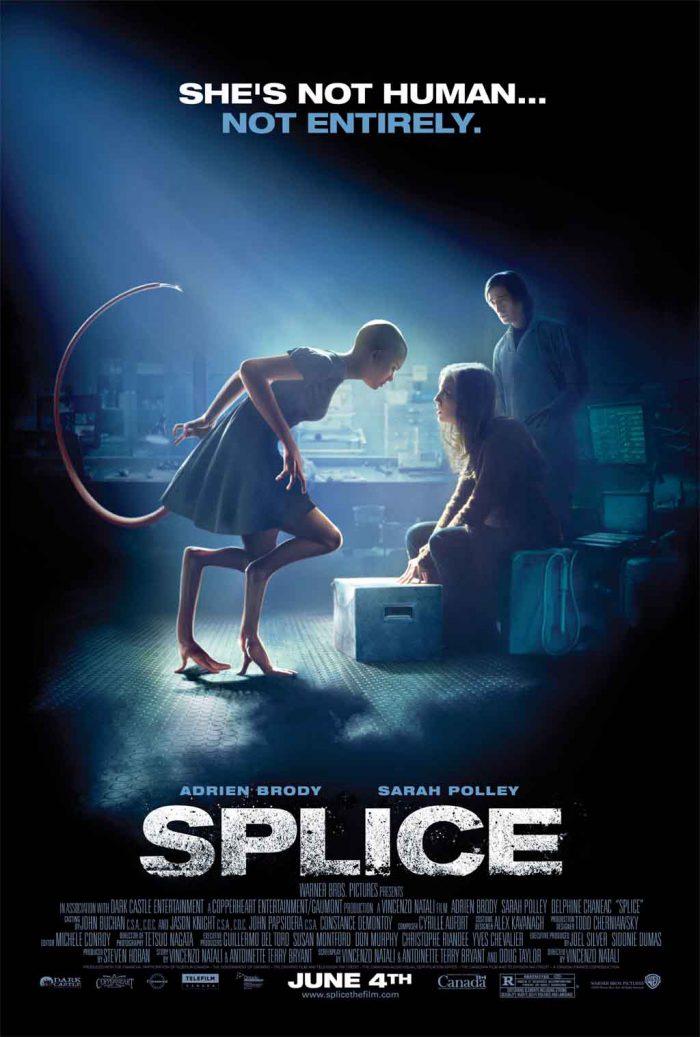 Unfortunately for this film, its producers billed it as sci-fi horror instead of revealing that it comes to us from the genre which David Cronenberg and David Lynch pioneered, which is postmodern horror that uses science and society as a metaphor for our own inner turmoil.

Splice centers on two scientists — Clive Nicoli (Adrien Brody) and Elsa Kast (Sarah Polley) — who serve a mega-corporation by trying to develop genetic hybrids which can synthesize proteins valuable to industry. In the process, they cook up their own hybrid of several species to see if they can produce a next-level organism.

Two more unlikable people would be hard to find. Kast demonstrates the controlling, critical, and manipulative aspects of the neurotic modern woman while Nicoli becomes the passive-aggressive retaliatory male who specializes in knowing better but letting others seek their own doom. To a Generation X observer, these two parties seem designed to reflect the norm and worst of the Me Generation which produced us.

Each scientist has doubt about his or her origins. Kast has an obviously crazy and abusive family, while Nicoli interacts with his brother Gavin (Brandon McGibbon) like someone embarrassed to be part of his own family. Despite being long-term partners, the two scientists cannot agree on whether or not they want to reproduce, or really, on much of anything.

Following the Baby Boomer pattern, Kast takes the lead in making decisions, with her partner warning her but never seeming to manage to intervene before the disaster, and the same occurs when the two decide to go “further” than their in-progress research and produce an ideal organism.

As this creature matures, it serves as multiple metaphors: for nature over nurture, for the division between parent as controller and parent as guardian-nurturer, and for the emptiness of modern life as these scientists attempt to find a middle ground between generating income, developing new technologies, and making their own derelict souls achieve balance.

Following the Croneberg lead, Splice leads its characters down a path they cannot seem to control, where they operate according to external instructions and symbolism yet never consider anything other than the theory of what they are doing, leading to disastrous results.

Along the way, it provides as many creepy twists and turns as possible, revealing the odious mechanistic emptiness of these characters and paving the way for their destruction in a manner compatible with the ancient Greek tragedies: those who do not choose have still chosen fate.