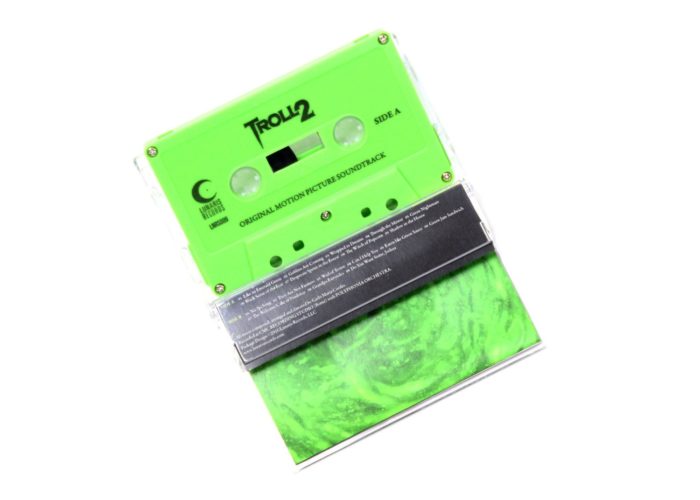 I had a Nam-like flashback to the time I tried to pick a fight with a Raputin’s manager over them not allowing me to return a tweeky Burzum synth only album, since it was just a synth and no guitars or metal. And I remembered how I first hated Turn Loose the Swans, and Black Aria, since I didn’t think they belonged there.

Does Troll 2 belong in the metal section. No? So why did I buy the tape, and what is the relevance to death metal. There is none. Mostly. Well, sometimes when I am on my AOL modem people do troll me. But mostly , when I have trouble finding inspiration in metal transmissions, I like to look for inspiration elsewhere, in other genres. Sometimes it could be classical, Bach or Dvorak, or, as in this case a film score. Film scores like Goldsmith’s The Omen, and classical , such as Liszt’s Faust are dark, like metal.

Before I continue with my obnoxious Troll 2 tape review, I wish to take a moment to unveil the secret hidden link between the Troll series, and the much inferior Harry Potter series, which was a rip-off of Troll.  Not only is there a young boy named Harry Potter in the original Troll, but he is an apprentice to be a magician, under a harmless jovial witch lady too. They keep saying “Harry Potter” this and “Harry Potter” that all throughout the film. Don’t believe me watch it and see for yourself!

Some of the puppets, and the same composer (Band), were brought back from Ghoulies. Ghoulies had a great score too. One time I even spoke with him on the phone once about trying to buy the original physical manuscript to that score from Troll him, but couldn’t quite procure it from him. It said it was for sale on his site.

But alas, many years later I received a transmission from the future. It appears in 2017 they have re-released the score on cassette.

Briefly, here are my thoughts on it. Here is a main theme:

At the time, not only did I think this movie stunk, but I thought the music was pretty bad frankly. Listening back to it now, the more underscored naturalistic parts of the tape sound the best. The main theme sounds good possibly only in a dated, humorous type of way. What little Goblin styled charm is there is ruined by the overly hair rock interpretation of the main riff.

I guess when you go to buy the Troll 2 tape, you know what you are getting is pretty bad. And in an ironic Ed Wood way that makes it kind of good. I was going to do a song by song review of it, but what’s the point. The problem is that despite their newfound popularity, Troll 2 and its score pale in comparison to the original. The original is under-rated. I listened to the first half of the tape, and then my batteries died. I didn’t have replacements on hand at the time of this review. I would give this tape a C. While the cover art and the nostalgia are cool, the music is slightly disappointing compared to the original overall. I would rate it a C. Go buy the original score to Troll, Phantasm, or the Fog to get inspired instead. Then channel that atmosphere into your music. Besides Goblin, I always though Fantomas did a pretty good job of this. I’m sure you can name some others.

Apparently, some dude did do a metal attempt at a Troll 2 theme:

7 thoughts on “Troll 2 and (the Joy of) Miscategorized Metal”