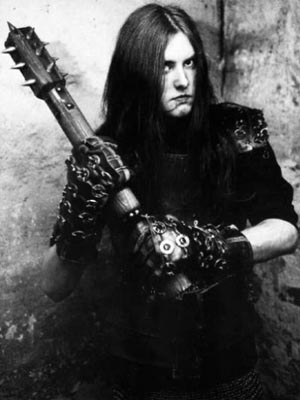 Most people are “unique” but have no actual direction or ideas, so they fake it with surface artifice.

They hate things like black metal, and want to destroy them if not outright, with mockery.

Mark Ames (email him) tries his limp hand at it:

The rise of the Black Metal movement in Norway is a case of humorless dirtheads taking a joke way too seriously. The joke was Satanic rock, which Lords of Chaos skillfully traces from its early origins in Led Zeppelin, Black Sabbath and Coven (who transformed from performing black masses on stage to perpetrating the weepy hippie hit “One Tin Soldier”) to metal’s second big wave in the early 80s and the rise of kitsch Satan-rockers Venom. To our modern eyes, Venom looks the spitting image of Spinal Tap during their Smell the Glove phase, but to dirtheads who didn’t know any better, Venom was the long-sought embodiment of evil. It was from the Venom branch of evil-metal that all of metal’s more violent, “evil” forms descended, including Black Metal. – Exiled (all quotations from this article)

This charge could be leveled at metal lyrics in general, but this idiot doesn’t know his metal history.

NWOBHM, like Angel Witch and even Judas Priest: society is blown because moralism is false, let’s explore the occult.

This theme also showed up in progressive rock…

Had the author of this piece done even an hour’s research this would have been evident, but he thinks he’s being funny.

The point of Satanic rock was to scare the Normals while fucking with the minds of its pimple-faced, predominantly male (nerdoid) audience, who needed to create a counter-world, with counter-morals and counter-aesthetics, to empower the nerdoids against the cooler, more successful jocks.

Straight out of 1980s teen movies. We know what research he did do…

The humor and empty boasts inherent in Death Metal were lost on Norway’s youth. They took Death Metal literally, and quickly discovered that it wasn’t “evil” or “authentic” enough. There were too many “poseurs.” And more important, too few genuine corpses for a scene that claimed to be so obsessed with death and violence.

You’ve got it backward. Death metal embraced all of this stuff first; remember the news stories about how a murder victim had been found lying on top of a copy of Death’s “Leprosy”? How many early death metal bands drifted toward actual occultism, and endorsing some fairly evil stuff?

For one thing, Black Metalists are incredibly pedantic–as laughably pedantic as the worst jerks you knew in the college rock/punk/hardcore scene, and pedantic about the very same stupid things: who is more “genuine,” “authentic,” “extreme,” “on-the-edge” and in metal’s case, “evil.”

Dummy, you just said it was an ideological genre. Of course authenticity matters.

Indeed, every sad word of An End to Evil oozes Perle’s and Frum’s pained, wasted 60s youths: wasted in yellow sheet stains, wasted studying maps color-coded with spheres-of-influence, wasted memorizing German armaments, and college years wasted playing Risk in their dorms while the socially successful hippies frolicked and fucked all around them.

Wow, straight up Crowdist dogma: it doesn’t matter how effective you are, be sure to be SOCIAL! That’s what matters!

Should Black Metalists cut their hair and vote Bush-Cheney ’04? Dude, I think the answer’s pretty fuckin’ obvious. In fact, thanks to these guys, America has become the world’s first Black Metal Nation.

A sub-intelligent finish to a downright retarded (yep, like trisomy 21 — retarded people are dumber than normal people) article.

No wonder he is so threatened by black metal.

0 thoughts on “The idiots are at it again”