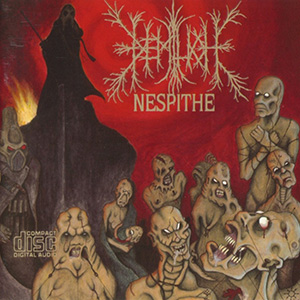 Almost exactly two decades ago, Nespithe, the sole full-length album of Demilich, was released, like a snake swiftly escaping its cage. That simile is not entirely off: trying to explain what this now classic death metal album sounds like, one almost inevitably comes across likenesses to slippery serpents or, considering the “cut-off” melodies played, to dismembered slimy worms twisting and turning. And growing anew.

What about the vocals? Metal fans seem divided and either hate those belching croaks or love them to death. In any case, I think they fit the idea of the album pretty darn well. The world of Nespithe seems like a cavernous microcosm of life and death, an evolutionary breeding ground hidden away from the rays of the sun, where Antti Boman‘s murky vocals comment on developments like a detached god. Penetrating those underground worlds (that are surprisingly free from tremolo riffs) feels like being thrown down a dark hole, and, after hitting the ground, you realise the floor is “moving”. And the listening experience is much like that: the mind is forced to pay attention to every single movement in the dark despite its complexity. Challenging, terrifying, beautiful.

23 years since its conception, the band Demilich is no more (it now seems definite), but Boman, the mastermind behind it all, is involved in other interesting projects (e.g. Winterwolf and Jess and the Ancient Ones) and we will always have the ever so generous Demilich download page.