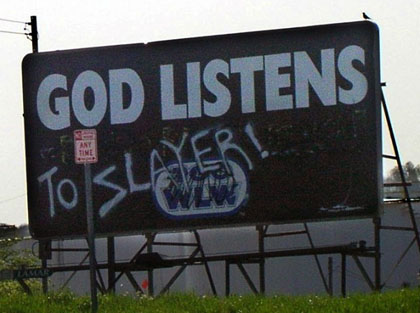 Kids of the 1980s were flatfooted out of luck when it came to heavy metal. The newspapers of the time all condemned it as leading kids to Satan, drug abuse, and promiscuous sex. Politicians mentioned it as a sign of the moral decay of our society, and the general view was that metalheads were dirty, stupid, incompetent and probably sociopathic.

But then, much as the 1960s were 20 years behind that time, 20 years and change passed…. and suddenly the kids of the 1980s were the good workers, family people, responsible adults, etc. of the 2010s. Time warps forward and catches up with itself, and suddenly the past is not so misunderstood. It is in fact a platform on which we stand to look at the light of the future.

Some of this involved sad events. The early death of Jeff Hanneman spurred a lot of soul-searching on the part of metalheads. When the wise elders you’ve always counted on to be there for you, and to figure out the hard stuff, are suddenly gone, you realize you’re the elder now. There’s nothing between you and the cold horizon of the cutting edge. Many people recalculated lives in the blue light of early morning, hiding out in bathrooms and attics where they felt for a few moments the world would not discover them.

Mixing Black Sabbath’s sludge with the guttural roar of Motorhead and adding the jackhammer speed of thrash kings Slayer, death metal bubbled up the 1980s via the decidedly nonmainstream metal underground tape-trading scene. The style then splintered into so many subgenres—black metal, doom metal, stoner rock, grindcore, post-metal—only a metallectual could keep track of them.

Those of us who have labored for years at describing metal find this gratifying; the world is not only awakening to metal, but taking its origins seriously. This is generally seen as a sign of trying to figure out its significance and place within society, which is far different from the “pushing back” of the past. We’re getting the same treatment The Beatles did, just thirty years later and in a lower-key mode.

Along that vein, a new book called Louder Than Hell: The Definitive Oral History of Metal has just been released, and this podcast interviews the writers and metal musicians to peer into metal history. These are nascent efforts, and “definitive” may be premature, but like previous metal books they are a good start toward where we’d like the study of metal to be.

While this is happening, a celebration of the life of Jeff Hanneman, guitarist for Slayer, drew thousands into Hollywood to hear a retrospective of Hanneman’s life and probably, destroy the theater.

But that was always the point. Slayer wanted to point out that society was based on lies, and our falsehood and pretense made us oblivious to the real and important things going on around us every day. This in fact has always been the message of metal, from Black Sabbath waking up the hippies to Motorhead shocking the world with excess. While this sounds like a mission of destruction, it is in fact a mission of belief in life, and enough love for life’s importance to care about telling the truth.

This fits in with our world’s acceptance of Hessianism. Putting our heads in the sand and chanting kumbaya has failed. Putting our heads down and earning money and hoping we can buy our way out of the decay has failed. Reality is still with us, and it’s bigger than society. In fact, if you know the cliche, “Think outside of the box” — society, or the social process itself, is the box and metal is what sets it aflame and casts us out into the cold and terrifying but thrilling night, full of potential and hidden wonders.

Perhaps the most stunning moment of the ceremony:

The only truly quiet moment came when a letten sent by Hanneman’s wife, Kathryn, was read to the crowd. It was both a love letter to her husband, and a lifelong thank-you card to the Slayer devoted, who made Hanneman’s life what it was. “May you continue to reign in heaven,” she wrote.

For all of its darkness, metal is a vision of light. It is clarity, freedom from lies, but even more, an ability to see the possibility of life before we cover it with our fears of being insufficient, inequal, victimized or just coming up short. Metal is bravery, the kind of bravery that comes of worship of life itself. I hope she’s right, and there is a metal heaven, because it won’t be the static place of the storybooks. It will be a land of constant adventure, of ever-greater quests and challenges, and it will be a place where stout hearts reign for eternity.

2 thoughts on “A generation passes on, and the world wakes up to metal”