At least, I hope he does. A few mainstream metal journalists have finally noticed that Adam Gadahn, now ascending in al-Qaeda thanks to the untimely assassination of Osama bin Laden, wrote about death metal back in the day:

DAMNATION – Volume Two (demo)
San Diego, California trio DAMNATION have been playing together since
late 1990, and Volume Two, their second effort (naturally), is a
professionally done, musically mature release that, unfortunately, is
lacking in the songwriting department. The two-song tape features rather
boring lyrics about insanity and nightmares, generic Sodom/Kreator style
thrash/death, and monotone Jorgen Sandstrom-style vocals. That said, the
songs do grow on you after a few listens, but I haven’t had the urge to
constantly replay them, as I did with, say, Timeghoul!! As I said, the
cassette is pro-packed and recorded, with excellent production (this is
the sound Timeghoul should have had) courtesy of a 24-track studio and a
great purple logo on the cover! Fans of Possessed and other early
Death/thrash will dig this.

GENERAL SURGERY – Necrology EP (Relapse)
Although this was recorded in November, 1990, this was only recently
released by Relapse Records. This is basically a Swedish “supergroup” of
death, featuring members of Dismember, Afflicted and Creamatory, plus
Exit-13. The 5 songs on this musically draw a lot from old Carcass, but
with a more direct, straight-forward feel and much better production
(courtesy of good ol’ reliable Sunlight Studios and good ol’ reliable Tomas
Skoksberg). Lyrically, the quote on the back cover pretty much sums it up:
“Murder is the only way to kill time”. “Severe Catatonia in Pathology” is
the sickest on the disk, with the happy overtones. Also the opening
instrumental “Ominous Lamentation” will be of interest. With nice
packaging and production, this is a worthy addition to any Death/Gore
metaller’s collection!

HELLBOUND – Apocalyptic Visions (demo ’92)
Although New York’s Hellbound call themselves a Death/thrash band,
I tend to disagree with that. To my ears, they sound more like a thrashier
version of Atheist or Sadus, possessing the prominent bass guitar &
screaming vocals, respectively, of those bands, but with the simpler, less
technical approach of bands like Vio-lence, D.R.I., or Exodus. Their
drummer, however, has his own very cool style that “demands to be
heard”! Amazing that this is their debut! Hellbound showcase their
professionality in both instruments & songwriting throughout the four
tunes on Apocalyptic Visions. The last two songs, “My Guilt is Silence”
and “Infernal Ecstasy”, absolutely rage!!! And the icing on the cake is the
stunning production – recorded on a 16-track machine, all instruments can
be heard clearly, with drums and bass shining through especially! Quite a
debut! HB should have a new demo out by the time you read this, but get
their brutal first effort by sending a blank tape and return postage

ENRAPTURED – 7 Song Demo ’92 (Demo)
This is actually a combination of the unreleased 5-song Reconstrued
Malfeasance demo and a new 2-song demo. Although the “Reconstrued”
tunes, recorded as a 4 piece (Tino Lesicco on drums/vocals, Pierce Totty
on Bass, Jason Smith on guitar and Justin Jones on guitar) and “included
as bonus tracks because of the poor sound quality”, the 2 newsies with 2
new members (Dan Stoops, vocals and David Smith, 2nd guitar) actually
have about the same sound and production. While Enraptured improved
their musicianship in the 4 months between recording “The Downfall of
Christianity” and “Abortion Consumed”, they show a decrease in
songwriting skill, The older tunes like “The Execration” and “Probe the
Flesh” contain headbangable Slayer/Carcass type riffs and deep, growly
Karl Willetts/Barney Greenway style vocals. The new tracks, however,
are generic highspeed Cannibal Corpse or Obituary-esque noise with
annoyingly loud vocals and incessant double bass drumming. My advice:
pick up this demo for the 5 excellent bonus tracks and ignore the 2 cheesy
commercial fag songs.

TIMEGHOUL – Tumultuous Travelings (demo)
Perhaps the best demo I’ve heard since I began listening to Death
Metal/Grindcore less than a year ago is Timeghoul’s debut 4-song,
Tumultuous Travelings. Mixing elements of Immolation, Cathedral, Brutal
Truth and Suffocation, this Foristell, Missouri quartet rage through “Rain-
wound”, “The Siege”, “Gutspawn”, & “Infinity Coda”, with unmatched
intensity and style. All the songs run over 5 minutes (“The Siege” is the
longest), and much variation is contained within. Drummer Tony Holman
can go from a high-speed “blast” beat, to a slow rhythm, and back to a
fast part in the blink of an eye! Jeff Hayden’s vocals are brutal but
different: Check out the singing part on “Siege” and the special FX on
“Infinity Coda”! The band’s instrumental ability is second to none, as are
their song writing skills, but this otherwise top-notch tape is marred by
bad sound. There’s much flutter and warble, and the volume is rather low.
With Timeghoul’s excellent musicianship, it’s a wonder that they haven’t
been signed yet!! So hey! If anyone from Earache or Relapse or whoever is
reading this, come on!! Pick up a pen and ink ’em right now! It would be a
shame if Timeghoul broke up before recording at least one album
professionally! But until then, we’ve got this masterpiece!

These are from Xenocide Zine, an old school death metal zine from 1992-1993 which featured many of the bands we regard today as the canon of death metal. Do you want to find out more about the origins of this music? Hit the Xenocide Zine page and check out their blasts from the past. 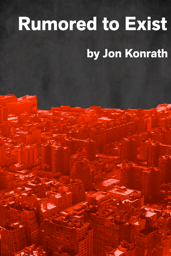 While you’re at it, you might be able to enjoy something new from the editor of that zine, Jon Konrath. He took his death metal fueled angst and criticism of modern society, and channeled it through a William S. Burroughs/David Foster Wallace/Neal Stephenson filter to come up with gonzo postmodern flash-fiction. You can read his latest novel, Rumored to Exist, in print or on your Kindle.

Konrath went on to write for Metal Curse, along with Vijay Prozak and other old schoolers. We wish Mr. Konrath luck in his literary career, especially since he crams more internal references to death metal lyrics into literature than anyone since… well, anyone. Not too many people write about the metal o’ death.

As for Mr. Gadahn, who is remembered fondly around here, we hope he takes over al-Qaeda and uses his new power to fight modern civilization. If Samuel Huntington is right, al-Qaeda is part of a “clash of civilizations” where those who want traditional society oppose the modern type of liberal democratic consumerist society, which death metal also seems to hate (with good cause: plastic trash is poison). This could give more people insight into what dissidents from Nietzsche to al-Qaeda are all about.