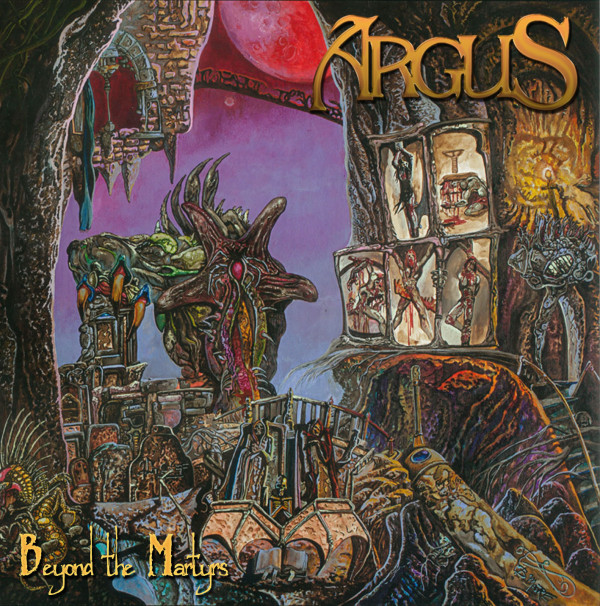 Inhabiting the terrain that is now labeled power metal, Argus originate in what is perhaps the newest wave in metal: fan-produced bands of any of the numerous true metal varieties. These tend to avoid current trends and focus on idiosyncratic interpretations of the past.

On Beyond the Martyrs, Argus applies its own personality to its influences. These are: Iron Maiden, for fast melodic riffs; Candlemass, for sense of tempo and type of melody; Manowar, for influence on chordal riffs and atmosphere, and a smattering of other NWOBHM and related acts rolled into one. This is a NWBOHM band that composes melodies as if it were a doom metal band.

Vocals alternate between the higher Queensryche-styled ranges and a more masculine, slower and more pronounced voice that’s reminiscent of what speed metal bands did to give their vocals more aggression. Instrumental prowess is demonstrated but not flashily so, and although there’s tremendous similarity between the guitar solos, each manages to stand on its own.

Throughout Beyond the Martyrs, you will hear three- and four-note groups which are familiar from classic metal such as the abovementioned influences and other well-known acts like Judas Priest. This is one of the ways this band stays in tradition without simply aping the past, as each of these melodic fragments is re-contextualized in a new riff or melody.

While Argus may not be for those who wish a “contemporary” sound, they are deliberately carving out a space for people who like the sounds of true metal genres but don’t want clones. This band wear their influences on their sleeves, seem nerdy and unabashed in their pursuit of heavy metal glory, and are probably going to keep doing it for the joy and thrills even if you absolutely refuse to consider buying this album.

6 thoughts on “Argus – Beyond the Martyrs”