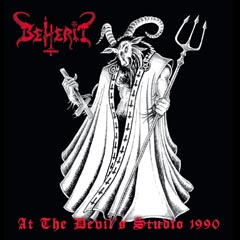 On those later EPs Beherit experimented with the sonic form of its material, not changing the song structures as much as the pacing and the use of guitar noise, drone and other techniques. What emerged on the Osmose release of The Oath of Black Blood (a compilation of demos assembled by the label into an album) was more monolithic and primitive, in the raw style of Blasphemy which was inherited almost certainly from a cross between early Bathory and early Napalm Death.

But some time later what came forth on Drawing Down the Moon removed the chaos in favor of a clear, simple, direct and ominously infectious statement of power; it matured, for lack of a better word, and cut out the ambiguity to make a purposeful and morbid statement of dark power.

At the Devil’s Studio attempts to take the early monolithic style and tweak it sonically to gain effect, and it does so by making a dark immersive world of hanging sheets of resonant sound, but it loses the sinister abstraction and aloofness of the second album.

However, it gives these songs a new dimension, and makes it like hearing them for the first or second time, which alone will induce me to buy this thing and keep it close at hand.