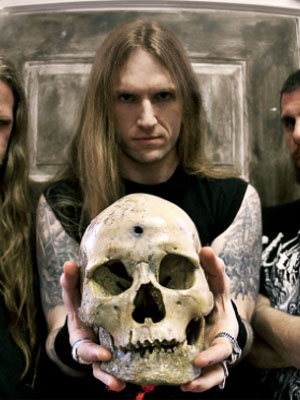 Thrash band Birth A.D., who seem to be a continuation of later 1980s thrash like SOD and DRI, have released a streaming track from their new album, I Blame You.

The new album has been recorded with 80s metal guru producer Alex Perialas and includes re-recorded tracks from the first Birth A.D. release, Stillbirth of a Nation. Much like early DRI albums, this will give fans the band’s entire oeuvre in an updated form.

According to Blistering.com, the new album is “angry, fast, catchy as hell.” Should be a contender for album of the year if nothing else.

Thrash was a hybrid between extreme hardcore and extreme metal that arose in the early 1980s with bands like DRI, MDC, COC, Cryptic Slaughter, Fearless Iranians From Hell and Suicidal Tendencies making short, fast, punk-structure songs with metal riffs.

Currently most people refer to the genre as “crossover thrash” in order to differentiate the term from “thrash metal,” which was a 1980s teen metal name for “speed metal,” and comprises the range of music from Metallica through Destruction.

4 thoughts on “Birth A.D. releases title track from new album “I Blame You””