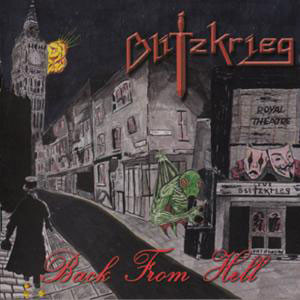 British NWOBHM band Blitzkrieg have returned with a new album, entitled Back From Hell. Melodic while still retaining structure, this album will appeal to fans of 80s era heavy metal, as well as those who prefer death/black metal but can appreciate skillfully constructed metal whatever form it may take.

Back From Hell has the band mostly keeping true to the traditional NWOBHM sound, with a few elements of further-developed speed metal present. Songs are expertly arranged, with each track featuring a clearly developed concept that never loses focus. This allows immersion within the verse-chorus structure and quickly illuminates the theme present within each. Verse and chorus are linked together with skillful transitions that makes the distinction between them organic, rather than artificial. Ornaments such as solos and fills are executed tastefully, with an eye towards shaping them into the song rather than the reverse.

Tracks are a mixture between heavier material and those that have more in common with 90s radio hard-rock and seem placed solely for commercial exposure. On these tracks the band forgoes thematic development in favor of repetition. Fortunately, those are the exception and not the rule; and while they do interrupt the album’s narrative to an extent, are still competently conceived.

Exuberant and honest in a way rarely seen among contemporary metal releases, in its best moments Back From Hell transports the listener back to a time when heavy metal was still exciting, and for that reason will be present on many best-of lists for 2013, even if it is marred by some concessions.

7 thoughts on “Blitzkrieg – Back From Hell”