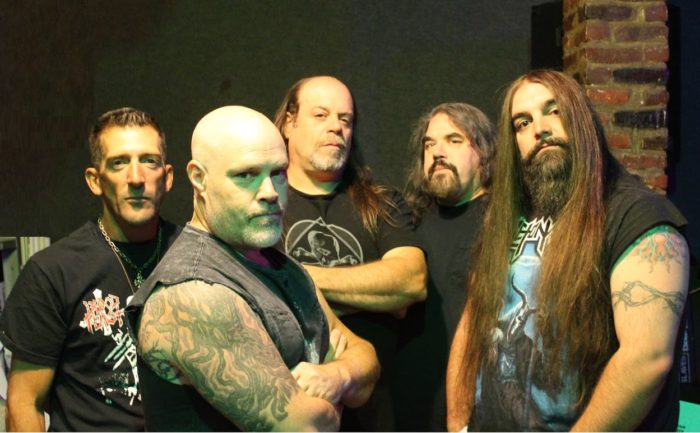 At long last, Blood Feast is reborn into the metal underground with their highly anticipated third full-length album, The Future State Of Wicked, set to be released by longtime fans Hells Headbangers. And today, the band reveals the first track, “INRI,” at Hells Headbangers’ Bandcamp HERE, where the album can also be preordered. Cover art and tracklisting are also revealed further below for the album, which is tentatively slated for an early 2017 release via Hells Headbangers.

Blood Feast fans old and new will not be disappointed by The Future State of Wicked, as the “holy trinity” of releases from the band’s early days – Kill For Pleasure (1987), the Face Fate EP (1988) and Chopping Block Blues (1990) – inform much of the new album. All the speed, brutality, and twists ‘n’ turns Blood Feast is known for are intact and in your face (nine of the 10 songs being written by original guitarist Adam Tranquilli), yet updated with modern production. Joining Adam are vocalist Chris Natalini and bassist Tom Lorenzo, along with some new blood in Joe Moore (drums) and CJ Scioscia (guitar).

Blood Feast was formed by Adam Tranquilli, Gary Markowich (vocals), Kevin Kuzma (drums), and Lou Starita (bass) in 1985 as Blood Lust. They quickly wrote and recorded their classic four-song demo, The Suicidal Missions. Shortly after, they became a five-piece with the addition of Michael Basden on guitar. The band was then approached by New Renaissance Records to contribute songs to their Thrash Metal Attack (“Menacing Thunder”) and Speed Metal Hell 3 (“The Suicidal Missions”). This prompted the name change to Blood Feast. New Renaissance then offered a record deal, which led to the recording of the classic Kill For Pleasure album and a US tour with Death Angel. The Face Fate EP quickly followed.

Shortly after writing and recording their proposed second album, Adam left the band. The remaining four members then re-recorded these songs, which became the album Chopping Block Blues. The band broke up shortly after the album’s release in early 1990. 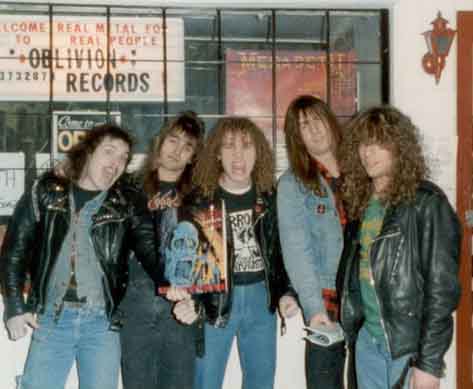 The five-man Blood Feast reunited for an appearance at the NJ March Metal Meltdown in 1999, but further activity was not to be. A second reunion began in 2007, albeit only with original members Tranquilli and Kuzma. Both Lorenzo and Natalini came on board in 2010, just in time for the band’s first appearance at Headbangers Open Air in Germany (they were invited back in 2013). During this stretch, Adam began writing new material, with the band even playing an early version of “INRI” at select shows.

The Blood Feast retaking its place in the metal ranks today began to take shape in March of 2014, with the addition of guitarist CJ Scioscia. When drummer Joe Moore joined a few months later, the unit was complete and immediately set to work on Adam’s stockpile of new material. Two of these songs (“Off With Their Heads” and “The Burn”) have become staples of the current live set. Such performances have become more frequent, culminating with an appearance at the True Thrash Fest 2015 in Osaka, Japan with Exciter, Hobb’s Angel of Death, and Game Over and, most recently, Hells Headbangers’ own festival Hells Headbash Part 2 in Cleveland, Ohio.

Now with a new generation of thrashers and metalheads holding records like Kill for Pleasure as their cherished cult classics, Blood Feast’s return with The Future State of Wicked could not be any more momentous and better timed. Exploding right out of the gates with the aforementioned evil-as-fuck thrashfest “INRI,” The Future State of Wicked racks up one breathless, bloody attack after the next. In one sense, the spirit of ’87 is alive and well in Blood Feast; their frenzied thrust is as rabid and red-eyed as ever, sounding like the crazed mania of men half their age. In another, perhaps more accurate sense, The Future State of Wicked is suffused with the wisdom of the ages, the whole span of thrash and speed metal history since Blood Feast’s original days on the frontlines, and it results in 10 angry-yet-finessed slices of audial terror buttressed by well-rounded but never too-polished production.

The past is indeed alive on The Future State of Wicked, and the days ahead surely spell that a Blood Feast is imminent! Hear for yourself HERE at Hells Headbangers’ Bandcamp with the album’s opening track, “INRI.” Cover and tracklisting are as follows: 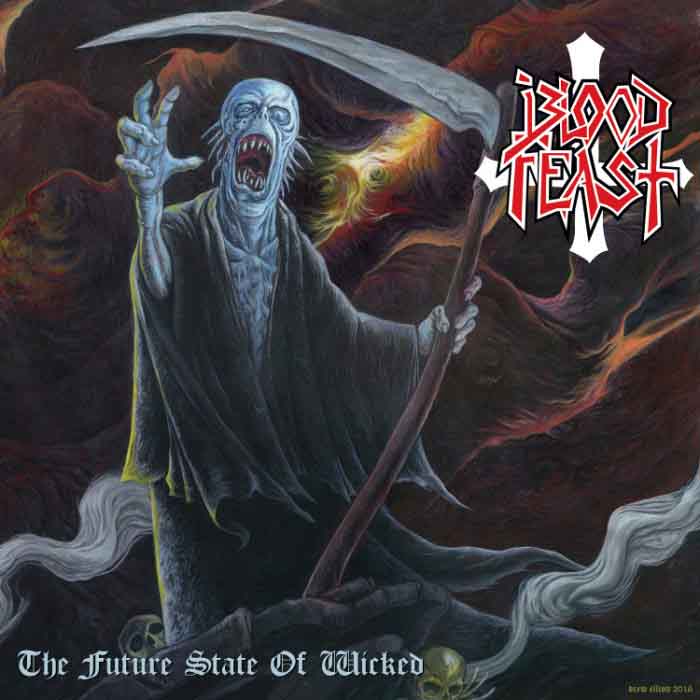 Tracklisting for Blood Feast’s The Future State of Wicked
1. INRI
2. Off With Their Heads
3. Brethren
4. By The Slice
5. The Underling
6. Last Rites
7. Who Prays For the Devil
8. Nein
9. Remnants II
10. The Burn