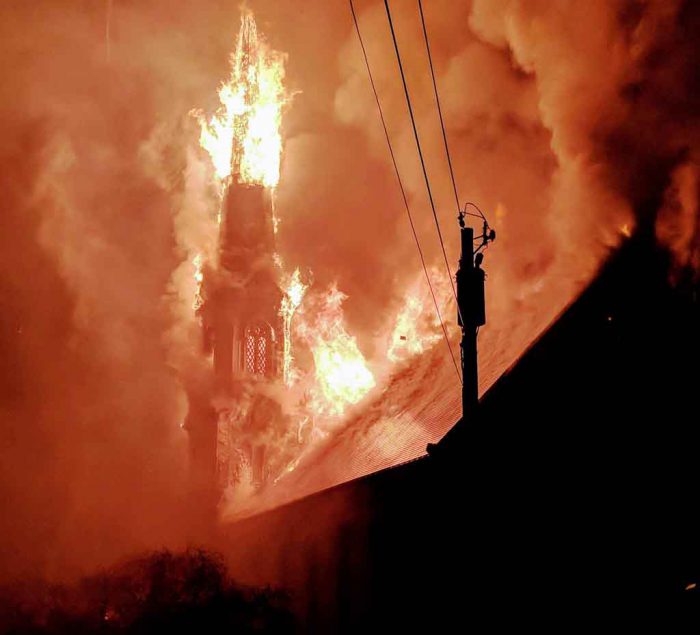 For starters, apparently someone is vandalizing, burning, and defecating on churches of a Catholic nature in France:

Last Sunday, the historic Church of St. Sulpice in Paris was set on fire just after midday mass on Sunday, Le Parisien reported, although no one was injured.

Last month, at the St. Nicholas Catholic Church in Houilles, in north-central France, a statue of the Virgin Mary was found smashed, and the altar cross had been thrown on the ground, according to La Croix International, a Catholic publication.

Also in February, at Saint-Alain Cathedral in Lavaur, in south-central France, an altar cloth was burned and crosses and statues of saints were smashed. The attack prompted Lavaur Mayor Bernard Canyon to say in a statement: “God will forgive. Not me.”

And in the southern city of Nimes, near the Spanish border, vandals looted the altar of the church of Notre-Dame des Enfants (Our Lady of the Children) and smeared a cross with human excrement.

Although secular humanist groups were blamed, the miscreants have not been caught. With the ignition of Notre-Dame today, it looks like a bad time to be a flammable church. Those ugly brick and glass things are probably OK however.

Adding to the chaos, America created its own black metal church burning, with three African-American churches torched by a black metal musician who apparently just hated Christianity but is still getting hate crime charges:

Matthews’ arrest came a little more than two weeks after the first blaze at the St. Mary Baptist Church on March 26 in Port Barre, a town just outside of Opelousas. Days later, the Greater Union Baptist Church and Mount Pleasant Baptist Church in Opelousas were burned. Each was more than 100 years old.

The fire marshal said Matthews posted on Facebook about and showed interest in a movie called “Lords of Chaos,” which Browning said is a recent Norwegian film that involved church burnings.

Matthews had shown interest in “black metal,” an extreme subgenre of heavy metal, Browning said. The music has been linked, in some instances, to fires at Christian churches in Norway in the 1990s.

Widespread frustration with Christianity may reflect its failure to defend against secular humanists, foreign groups, big money, neurotic egalitarians, and others who are currently eating what is left of the corpse of the West.

As this society proves unable to find any common ground or shared cooperative purpose, expect warfare among special interest groups to accelerate. Might be a good time to stock up on guns, ammo, and classic black metal vinyls.