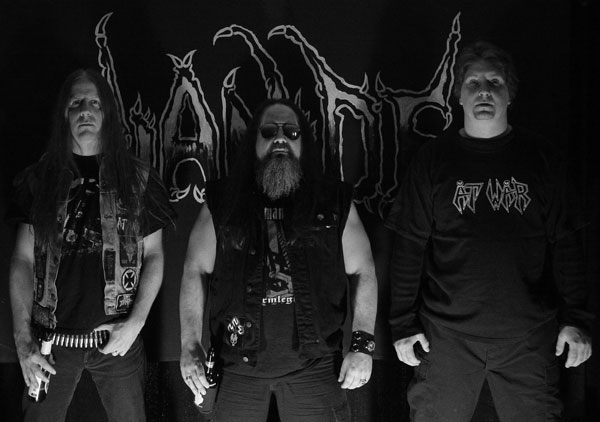 Widely revered Chicago death metal cult CIANIDE are premiering a new track, “Dead and Rotting,” today at Metal-Army.com alongside an interview with the band. “Dead and Rotting” comes from CIANIDE’s brand-new album on HELLS HEADBANGERS, the appropriately titled Gods of Death, set for release tomorrow worldwide. The link to the track premiere can be found here: http://www.metal-army.com/?p=22698.

Already, CIANIDE’s Gods of Death is being hailed by the international metal press, even landing the band a covetted feature in next month’s issue of Decibel. Here are some snippets of the buzz currently circulating around Gods of Death:

• “Will make peers like NUNSLAUGHTER or JUNGLE ROT weep” – Terrorizer [4/5 rating]
• “Death metal at its most primitive, primeval, and downright punishing, ugly as sin and reassuringly predictable. If it ain’t broke, don’t fix it” – Decibel
• “Exactly what it is intended to be: a well-done homage to early Celtic Frost” – About.com [B+ rating]
• “Comes from the oldest style of death metal…will confirm that the underground isn’t dead; it’s just overshadowed by the drama of the emotional-like-emo people” – Examiner.com
• “Cianide stay the course and leave an even longer trail of corpses” – Blabbermouth.net [8/10 rating]
• “Monstrous” – Popdose [10/11 rating]
• “Death metal as it should be, at its ferocious, bestial zenith” – Metalcurse.com [10/10 rating]
• “Proves that Cianide still has what it takes to be one of the more important driving forces of the underground metal world to date” – Apochs.net [9.5/10 rating]
• “For those who prefer their metal keeping its direct link and inspiration all the way to the glory ’80s, Cianide is one of the most obvious answers” – Dead Void Dreams webzine [9/10 rating]
• “A worthy effort from a band whose return is most welcome” – Metalreviews.com
• “Lots of bands are now jumping on the bandwagon, but these guys have been doing old-school since old-school wasn’t cool” – Wormwoodchronicles.com
• “This is the way death metal was meant to be: thick, groovin’ and brutal” – Brutal Control webzine
• “A superb death metal album that delivers exactly what you want: no-frills deathliness with no fancy trickery on the production or mix” – MetalTeamUK.net
• “Operate in a space between BOLT THROWER’s chugging surety and the more ominous, cavernous resonance of INCANTATION…one of our most devout, unsung US death veterans, and worth experiencing if you want nothing more than to ball your fists up and feast on human misery like a streetfightin’ troglodyte” – From the Dust Returned webzine

About Metal Army: Metal-Army.com is the new number-one online destination for the metal community! Featuring all of metal’s latest news, reviews, etc and guest writers that include Oderus Urungus (GWAR), Rob Dukes (EXODUS) and UFC fighter Dan Hardy (amongst others), Metal-Army.com is home to the best that metal has to offer. Metal-Army.com also hosts monthly bar nights across the country where metalheads can go to hang out with fellow metalheads, have some drinks, and see some of their favorite musicians spin their favorite metal songs during special DJ sets. Past DJs have included members of White Zombie, Exodus, Testament, The Cult, Neurosis and more! The next Metal Army Night is scheduled for August 9th at Idle Hands Bar in New York City at 9PM!

CIANIDE – “Dead and Rotting” by MetalArmyUSA

0 thoughts on “Cianide “Dead and Rotting” from “Gods of Death””