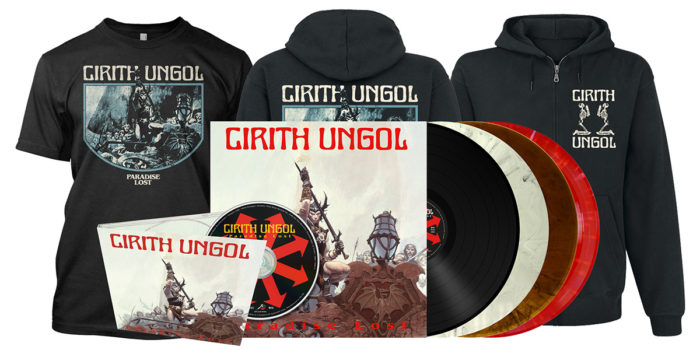 Metal Blade has managed to find the holy grail of Heavy Metal, the album that hasn’t been available officially for decades, by one of the best Heavy Metal bands of all time – ‘Paradise Lost’ by mighty CIRITH UNGOL! Initially released in 1991 by Restless Records, Metal Blade has finally been successful in licensing the rights to this masterpiece!

On the 7th of October ‘Paradise Lost’ will be released for the first time ever as an official LP! Besides 180g black vinyl, differend colored and strictly limited versions will be made available: white/black marbled (ltd. 500), brown/black marbled (ltd. 300) and red/white splatter (ltd. 200 – exclusively available through our eBay shop). Additionally, ‘Paradise Lost’ will be available as a Digi-CD for the first time ever, including five previously unreleased bonus tracks! The album is now available for pre-order at www.metalblade.com/cirithungol – where the classic track “Join the Legion” is also streaming.

The LP will be released featuring a special vinyl master, using the original (!) master tapes as a source, re-mastered by Patrick W. Engel at the Temple Of Disharmony studios, best sound guaranteed! The vinyls feature 400 g spine sleeves, a 12-page booklet and an A1 sized poster. The Digi-CD has been newly mastered from the original master tapes as well, done by Bart Gabriel. The CD features five bonus tracks (all alternative mixes from album tracks). Both, CD and vinyl, feature previously unreleased photos in the booklet as well as liner notes and song descriptions by band members.

The story of ‘Paradise Lost’ as per Robert Garven (drums):
“The saga of Cirith Ungol’s fourth album is true to its namesake “Paradise Lost”. Like a classic Greek tragedy, it is an epic tale filled with pain, challenges, battles, lost opportunities, and final redemption. It contains a cast of heroes and villains, playing out their parts on a stage of metal, at a time when hair bands and speed metal were in vogue.

The seeds of this project grew from the fertile soil that was the aftermath of “One Foot in Hell”. After its release the band immediately started work on their fourth effort “Paradise Lost”. This was planned to be a concept album, and the album cover and theme had already been selected.

After its release the original record company could not secure distribution in Europe, and they released the band from its 3 album deal. Shortly thereafter, several of the remaining members left out of frustration. However, a few original members kept the fires of Ungol burning, closely guarded in its secret lair. They waited for the time when the stars were right, and the Great Old Ones were ready for it to come crawling out from its ancient crypt, back upon the metal stage. As of this writing, the being called Ungol has arisen to take its rightful place in the pantheon of true metal, and calls forth the Legions of Chaos to stand by their side to usher in its final act.”

CIRITH UNGOL will perform live for the first time in 25 years at the 2nd installment of the Frost and Fire festival in Ventura, CA, taking place October 7th-9th, 2016.