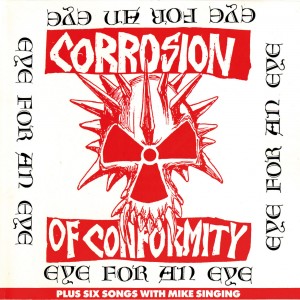 Back in the early 1980s, before the teenage metal magazines got a grip on the term, there was a genre called thrash because it was invented by thrashers, that is, people who got around on skateboards and were as dropped out of society as the hackers and anarchists. In fact, there was a lot of overlap.

In the thrash genre, there are three big names who simultaneously invented this style of putting metal riffs in punk songs without losing the integrity of either genre, and those were DRI, COC, and Cryptic Slaughter. They crafted short songs out of 2-3 riffs and creative re-stylings of those riffs in the punk style, but using chord progressions and phrase-oriented riffs like metal bands. The result was a genre all on its own that was neither metal nor punk and literally invented a category for itself. Of those, COC had the most feeling of a classic punk band and got closer to what Suicidal Tendencies and MDC were doing, which was to make punk songs with a metal edge and play them faster than anyone else had ever done before.

For most of us, the only COC we could afford was the Caroline records issue of Eye for an Eye + Six Songs with Mike Singing on CD, since all we had before that were fifteenth-generation tape dubs from someone’s brother’s girlfriend’s uncle’s drinking buddy’s vinyl dubbed in a basement next to a rack of molotov cocktails and homegrown indo. These songs are brief punches of angst and insight, opening with pure outrage at the ongoing failure of humanity and transitioning to an energetic desire to do something about it, much like a mosh pit itself. Over them, gruff vocals are almost totally incoherent and drums mostly keep time but diverge when they want to for added emphasis.

Eye for an Eye + Six Songs with Mike Singing won most of us over for its raw creativity. It lifts some material, including a bass riff from Yes and at least a couple riffs from Black Sabbath, but that’s immaterial; the point is that each of these songs is a small story, and although circular one that mimics its topic matter and thus, each song is distinctive and yet within the same style so that the album holds together like a wartime journal and yet has enough variety to be heard time and again. Thrash lives with this re-release that brings the original material back to life for a new generation who may need a guidepost beyond the pre-packaged categories of music product.