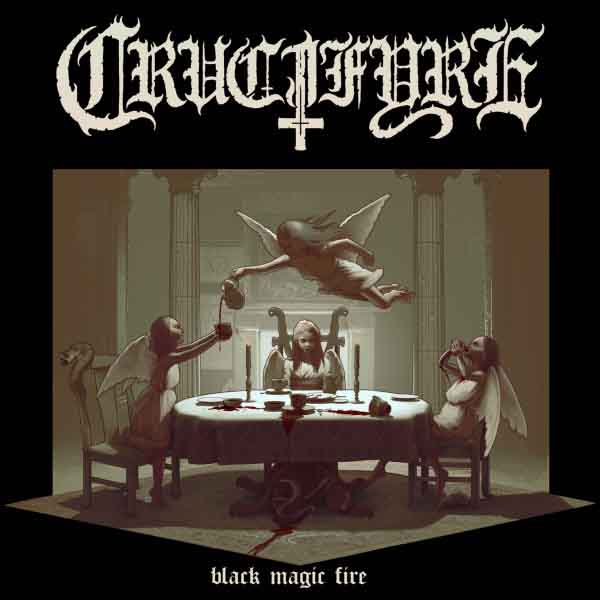 Late entries in the attempt to partake in the retro-Swedish death metal sound, Crucifyre comes with an impressive pedigree of B-level Swedish death metal bands contributing members to this new project. To realize this vision, they combined heavy metal verses with Sodom-style chanted choruses and melodic death metal touches using the Swedish death metal modified d-beat under the skin. The result is not stylistically terrible except that it satisfies none of the cravings associated with its constituent parts, and instead makes a very “modern metal” collage which makes sense linearly but taken as a whole expresses nothing.

In addition, the melodies and vocal rhythms used here are simple in the way radio jingles are (as opposed to the “broken air conditioner that needs oil” way that Cannibal Corpse-derived bands can be) and the combination makes this music simply annoying. Catchy rhythms, sing-song melodies and a jumble of riffs thrown together seemingly both hastily and craftily creates a sensation of being in a Disney ride where each new riff is a new attraction and each represents a general gesture at an idea, not an attempt to unite a theme through all the different parts. This creates a feeling of rotation to the songs as they cycle past.

Making retro death metal is not easy, nor is it usually advisable. Death metal does best when motivated by a strong vision and hence a clear aesthetic voice and thus selective use of the techniques available to it after three generations of metal and punk. What happens with Black Magic Fire is instead the an attempt to make music like one would make a burrito: dump in some death metal asada, top it off with heavy metal cheese, then scatter some d-beat rice and German speed metal lettuce through the mix and wrap it up. Then hope it makes sense. This album does not, and does so in the most brain-liquefying simplistic way possible.