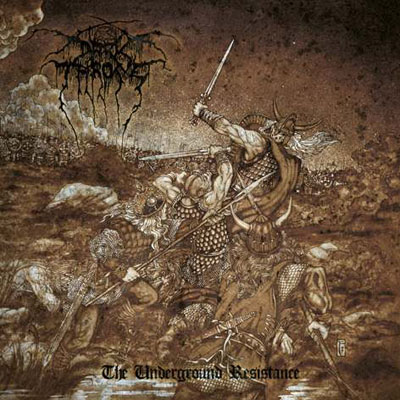 A few days ago, we published a controversial review of the new Darkthrone album, The Underground Resistance. Wherever this has been mentioned, it has generated quite a backlash from people who want to assure us that they indeed do not find it so devoid of benefit, and want to remind us that we’re simply dour sourpusses who hate anything except the avantgarde.

I am aware that human beings specialize in denial, and that our method of handling denial is transference and projection, by which we invert accountability and place it on those who do not conform to social expectations, which is a vast tolerance of everything and anything that some living breathing human has put out. As a result, I don’t expect much from the first wave of reviews anywhere, but I’m also not the kind of jerkoff editor who will cut his writers off at the knees.

This left only one solution: listen to The Underground Resistance myself.

This is more difficult than it seems. I do not believe youth is the sweetest time of life; in fact, I hate nostalgia. But when I was developing (or clarifying) the most important ideas and truths I have found in this life, it was a reasonable guess that Darkthrone might have been on the stereo (back then, we used big hulking stereo amplifiers with CD players to reproduce sound from a primitive form of MP3 file stored on a physical medium with reflective bits). In fact, I can remember a number of important discoveries in which Darkthrone featured prominently by being the soundtrack to some dark and some light realizations, and at least one Darkthrone tape (ah yes, youngsters; unless you were rich, you had a “cassette tape player” in your car, to which you dubbed CDs using your big hulking stereo, and then played primitive analogues of MP3 files using magnetic flipped bits on chromium dioxide-covered plastic tape) that lived in my car during a dark era when I drove many miles at night under the threat of an uncertain future.

When I had triumphs, I threw on Transilvanian Hunger, which was a cry to war for a generation. When I studied late at night, Soulside Journey was often on the stereo (low volume, using an anachronistic physical volume knob — crazy shit, man). I remember first “getting” the black metal ideal when listening to Under a Funeral Moon, and realizing this was the revenge of the naturalists. It wasn’t bad production; it was organic sound, a blaze of it, in which the message hid like a signal/noise ratio refinement experiment. It was deliberately obscured, esoteric music in which one could hide the truths that a dying society could no longer face. I loved it, and still do, but I really hate nostalgia. Nostalgia says the best days were past; that’s nonsense, since we learn every day and constantly get better at being who we are. That last sentence contained the main point of this article.

The context in which Darkthrone exists for its longtime listeners is hard to express, however. It’s somewhere aligned with worship and built on trust. We entrusted our hopes, fears, terrors and anger to Darkthrone back in the day, and in exchange vested in them a belief in them as musicians and people. They were no longer just a bunch of guys bashing on guitars, but sages, deliverers of wisdom. Maybe this is wrong, but black metal is a somewhat messianic genre to which children run when they start to realize that the modern world is not a train to Utopia, but a train wreck of false illusions and trends which the majority of people are too zombie-drugged on consumerism and ideology to notice. We the children of this dead world were seeking some reason to keep going and to thrive, and Darkthrone gave us those reasons among other black metal sages.

As a result, it’s impossible (think of Heisenberg) to simply listen to a Darkthrone album. Too much comes with it: history, context, emotion. For many artists, this is good. For example, Robert Fripp and Brian Eno are still making ambient music and their faithful buy up each one and revel in the new space discovered. Some bands find niches and are able to keep improving. Others flatten out, having lost the point of what they were doing, and instead try to become inclusive and patch together all their influences and all the stuff they know makes people happy to listen to their songs. The result is like a hotel room, in that it fits everyone’s specifications but no one’s needs.

When I first listened to The Underground Resistance, I was tempted to consider Jon Wild’s piece inaccurate. Darkthrone have made an album of pleasant music that is equal parts Iron Maiden, Celtic Frost and random death metal and speed metal era influences. I caught Slayer references, something that sounded like a Destruction cadence, and many riff types from the last four decades of metal. I doubt any of this is wholly and completely lifted, but I could be wrong. The fact is that they’re of the same archetypes. However, that has no bearing on whether the album is good or not. If someone were to assemble songs of classic riffs, and give those riffs new life by putting them together in a song which was evocative of some emotion or concept, then that would be a victory. Originality doesn’t matter, because no matter what you’re doing, Haydn did it four centuries ago, or Mozart slightly later. That’s the great farce of music. It’s not about discovering some new theory about making music, but about making music, and much as you’d write a story or sculpt a figurine, using those skills to shape raw material into something which reminds us of something truthful in life. The best art becomes “classic” because it did that better than anyone else.

However, as time went on, I realized Jon is both far off — and dead on. The problem with this album is not the recycled riffs, or the style, or the goofy vocals. It’s that it has nothing to express except that a metal band made an album out of things they knew would work. We know Fenriz and Nocturno Culto can put together a great catchy album in their sleep, and have it humming it all year if they want. Here, they seem exhausted, a couple of old buddies who got together on the weekend to jam and when it was done, cut the tape and mailed it off. This tendency is most clear in the fills that connect riffs to one another. They are obvious in the sense of being very basically musically, not adapted to the song, not possessed of grace. They just tie together some riffs and do an adequate job, and that’s apparently all that’s required.

Remember above how I said the main point of the article was encoded in a sentence about nostalgia? We should always be growing in knowledge and power, and moving toward being better at what we do. Darkthrone still have this in them; for some reason, they’re tired of exercising it. In doing so, they’ve become a cult of their own entropy. There’s nothing wrong with this album except that it has nothing to recommend it. It is competent; it’s fun to listen to; I never want to hear it again. It is people who gave up on their own future and now are doing what the world expects of them, just like going to a job. Our world is broken and failed indeed if it has condemned such talented people to such a fate, but I hope they pull out of this tailspin because they as people and Darkthrone as a concept are worth doing better than this.