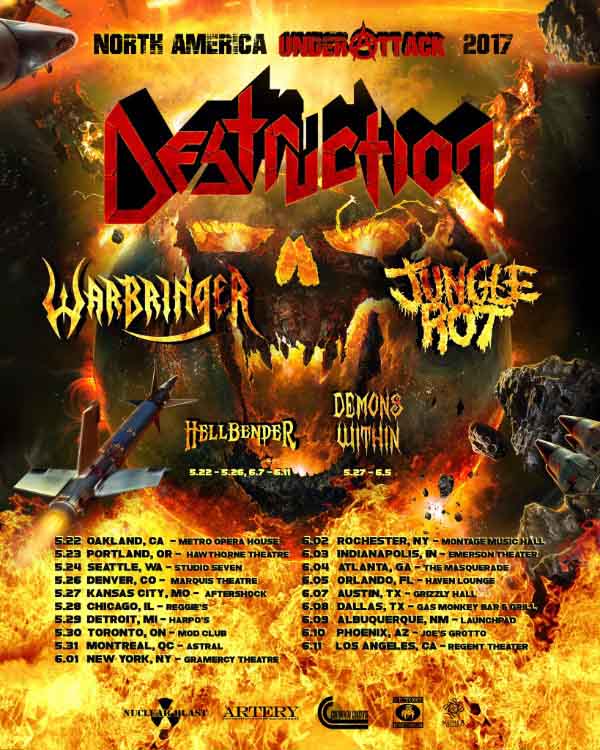 Legendary German thrashers DESTRUCTION will kick off their North American Under Attack” tour in Oakland, CA on May 22nd. The trek will hit 19 cities including Chicago, New York, and Atlanta before concluding in Los Angles at The Regent Theater on June 11th. Direct support will come from both Los Angeles thrash metallers WARBRINGER and Wisconsin death Metallers JUNGLE ROT.

Mastermind Schmier states:
“The Under Attack tour will finally come to North America. Sorry for the little delay, but it has been a busy and successful run so far in other countries and we are looking forward to bringing it to North America. With WARBRINGER and JUNGLE ROT, we are bringing two crushing bands that are friends and fit very well on this old-school billing.

America was never easy to tour for foreign thrash bands, and that’s why it’s always special for us. You just never know when it’s going to be the last time as it is not going to get easier in the future.
So come out to thrash and party with us and of course the set list will feature a lot of 80’s classics as we as we are working on THRASH ANTHEMS II at the moment. See you in the pit! ”

DESTRUCTION is touring in support of the latest release, Under Attack. Watch the music video for the title track, “Under Attack” on the Nuclear Blast YouTube channel!

Joining the bands as openers are HELLBENDER and DEMONS WITHIN who will split the tour.