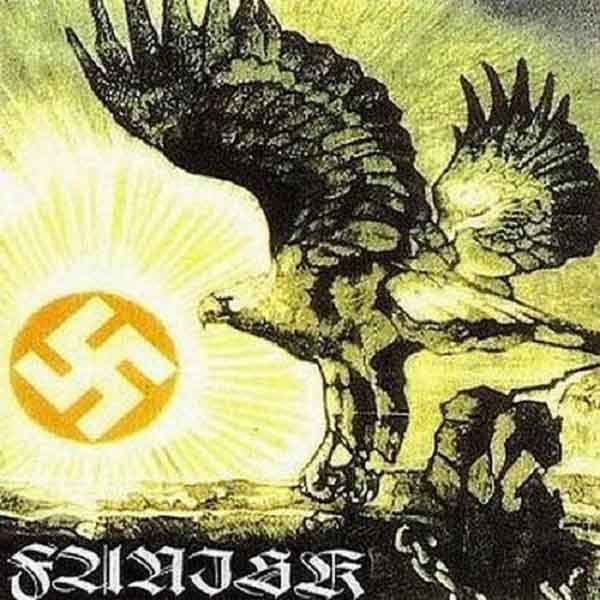 Normally I refuse to review NSBM because in my view, if your politics must be understood to like the music, the art has failed and we have ventured into propaganda. Nonetheless I attempted to listen to Fanisk because so many people swore by its value, including those I respected.

Let me quickly set your fears to rest: this is a band endorsing Nazi sympathies which can be entirely forgotten for reasons of artistic content, independent of any message it may carry. Unlike Darkthrone, Burzum, Morbid Angel, Incantation, Infester, Graveland, Mayhem and other bands which have flirted with the triskelion, Fanisk is a proficient form of terrible that combines post-metal, excellent neofolk keyboards, and boring droning black metal with chromatic fills elevated to the level of riffing as happened on later Gorgoroth albums. In many ways, this is like neo-Nazism itself: a backdoor by which low-quality material can declare itself faithful to The Cause and achieve inclusion to social circles that were denied to it before.

The best part of this release are the keyboard intros and background Summoning-style keys which accompany the slighter guitar riffs to fill out the atmosphere, although sometimes these mistake the mood are come across as inappropriately cheerful in the style of Master’s Hammer. If Fanisk stitched together the keyboard-heavy parts of this album they would have a killer 15-minute song, but as it is you have to listen to post-metal melodies set to black metal textures, which establish a good energy and atmosphere then fail to figure out where to take it, and substitute chromatic fills and bouncy crowd-pleaser riffs to try to take it home. Obviously the Deathspell Omega style has had a huge influence here but it is similarly directionless.

The only way to fight politics in metal is to call out these bands on their garbage. Christian metal is garbage, SJW post-hardcore “enlightened metal” is boring and directionless, and this festival of NS fidelity and love lacks a purpose as well. With Burzum, the Nazism came out of the art and a hatred for the mediocrity and cowardice of humanity; here, the band heads the opposite direction, and tries to invent the art out of the Nazism and collected impressions of what is hip. The result is uninspiring.