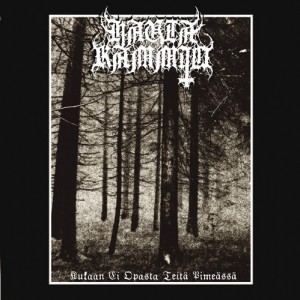 During the early days of black metal, it was acknowledged that punk had been a major musical influence on the genre. In particular, Discharge was cited as a foundation for seminal black metal band Hellhammer which later inspired a generation in the form of Celtic Frost.

The descendants of that heritage were the legendary Darkthrone, who fused punk energy, powerful riffs, and the searing bleakness of black metal into a musical maelstrom that had never before been heard.

Unlike Darkthrone however, Hautakammio does not sound greater than than the sum of its parts. While powerful music, it does not invoke a landscape of sound, remaining confined with linear production and direction. Nevertheless, this track is a solid composition with a unique take on a genre often stagnate.

For those interested in hearing more, the album Kukaan Ei Opasta Teitä Pimeässä will be released later this year through Darker than Black Records.