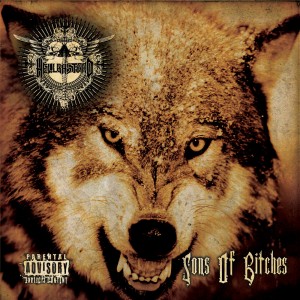 The limitation of metal is that it has such a strong identity that it can easily become repetitive. The danger of going the opposite direction is that with no sense of identity music loses its own character in an effort to be open-minded.

Hellbastard hover on the lintel of that conundrum. Famous for their mid-1980s crustcore (and possibly for coining the name of that genre) the band detoured into metal on 1990’s Natural Order, but return here in a blur of distorted power chords and hoarse vocals.

The first four songs are relatively straightforward Amebix-style crust with interesting time changes. Vocals are searing and impressively aggressive. In addition to some ideas borrowed from rock, many riffs bear the stamp of middle-period Slayer.

Sons of Bitches mixes in the jaunty rhythms of late speed metal, conveyed mainly through the vocals but causing all of the music to be pulled by the catchy, repetitive chorus phrases. If you can imagine later Destruction fused with Pantera, embedded into a crust band, that’s the rough idea.

There are two outlier tracks. “We Had Evidence” starts a metal-styled instrumental that acquits itself quite well and then veers off into jazz fusion technique while recorded loudspeaker voices play in the background; then becomes a chanty metal-crust hybrid. Then “Throw the Petrol Bomb” comes on, which is some form of reggae lite with lyrics taunting the anger and frustration of political protesters.

The strength of this EP is its pure crust orientation. While the Slayer-style riffs give some power to the underlying material, the speed metal chant-vocals and assorted odds ‘n’ ends tossed in from rock and metal distract from the power of these songs. Perhaps on a full-length the band will focus more on its strength and slash out a slew of crust anthems.

One thought on “Hellbastard – Sons of Bitches EP”