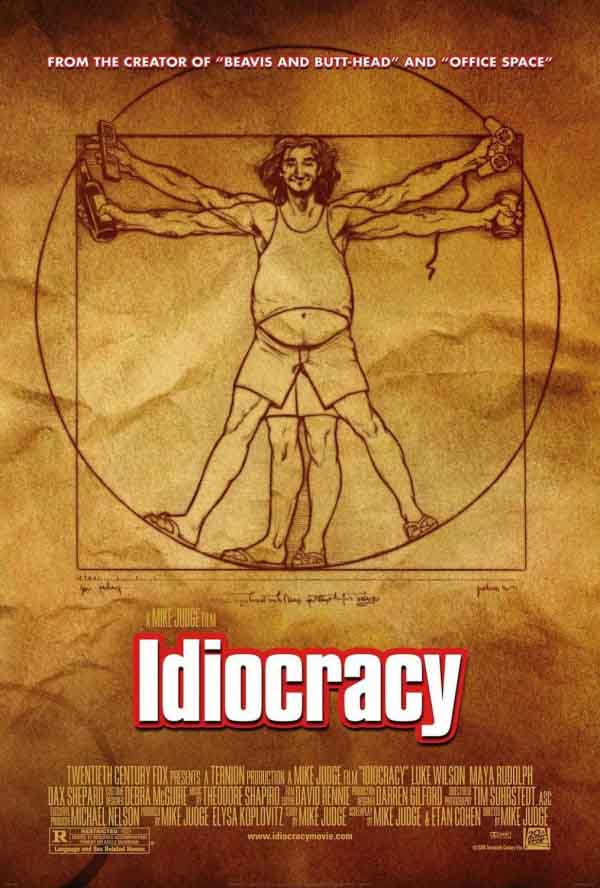 Some say the role of art is to show us what is in the future by amplifying what we refuse to notice about the present. Idiocracy takes on this task by showing us what happens to a egalitarian, sex-obsessed, entertainment-besotted and distraction-oriented culture over five centuries.

Set in 2505, Idiocracy follows the story of two people chosen for a crionics experiment because they are average in intelligence, physical ability and motivation. Absolutely expendable in the present time, they spend a half-millennium in cryostasis and emerge into a changed world.

Following the long tradition of hyperbolic absurdist comedy, Idiocracy portrays the world in broad brush strokes and basic colors. It does this because if it got any subtler, we would recognize America 2015 A.D. in this mess. In the future, the Dunning-Kruger effect — by which the stupid are arrogantly confident and the intelligent timorously hesitant — leads to a population of morons.

In the future world, society is ruled by entertainment of the most Beavis and Butthead variety, constant sexual and masturbatory stimulus, and the type of consumer hell that was imagined by 1980s thrash bands. People are not only brick stupid, but hopelessly vapid, living in a constant flood of distractions while their world crumbles around them. Idiocracy amplifies present problems to their maximum: pollution, corruption, incompetence and apathy have become not just commonplace, but dominant.

The film shadows past stories on this topic, notably Brave New World. In that novel, eugenics — the science of managing the intelligence of offspring — was controlled by government to produce leaders, artisans and drones. In the idiocratic world all eugenics has been abandoned and people survive through the buildup of technology which manages the world for them, having grown too stupid to do more than press buttons. As in Demolition Man, which alludes to the Huxley book, future authorities depend on maintaining the appearance of order through the absence of conflict. Citizens are threatened by insane police, bribed with sex and money, and kept distracted by Roman empire style circuses with a technological edge.

What this film does well is to show us a vision of hell. It keeps this vision on the line between what we recognize and what we can imagine, but the allusions to our present world are too close to be ignored. The future culture represents a cross between pro-wrestling, redneck culture, barrio living and urban lifestyles. Consistently the lowest common denominator is revealed in everything. The future population seems to be mostly Hispanic and white, with relatively few African-Americans but a health number of people of indeterminate mixed origins. This fits the theme of this movie, which is taking America A.D. 2005 and exaggerating it to reveal the natural end result of the path it is on.

In the intervening decade, the gap between reality and Idiocracy has narrowed to an alarming degree. What cannot be denied is that the future, like the present, is insufferable. People are fools, but if anyone smarter than they are arrives, they call him an idiot and metaphorically crucify him for their own entertainment. Arguing with them is like talking to people on the internet who cite Wikipedia and big media articles, but do not understand them, creating a kind of circular debate where the only people who understand it are in the minority and as a result are ignored. People lack awareness of anything more than their immediate needs in their immediate future, and have not only a lack of empathy but something worse than apathy, which is total obliviousness toward all consequences which cannot be immediately visualized. In Idiocracy, ignorance wins out over knowledge and intelligence every time, and the only way to get anything done is to lie to people and play to their superstitions and ignorance. It is a cynical and yet strikingly accurate view of the future.

Where this movie becomes difficult is that it is a cross between political polemic and cartoon, although it is not animated. There is no subtlety, no depth of character other than vague goodwill, and every scene exists to prove a point on the outline of an essay which might be titled Too Much of a Good Thing: How Humanity Won All Challenges and Atrophied Into Mental Retardation. The underlying pro-eugenics theme does not focus, as most of them do or movies such as Gattaca flirt with, on the production of superior beings so much as on the proliferation of average ones, and how that in turn induces average to consistently lower itself to avoid excluding anyone. The most crushing scene occurs when lead character Joe Bauers attempts to explain simple reality to a group of future-idiots, and is mocked for his trouble by those who rely on supposed “superior” knowledge.

I doubt this movie will find any fans in our established elites, for whom the idiots of this hypothetical — and it is best to put a big fat question mark next to that word — future seem like ideal constituents. Nor will it find many political supporters, since it avoids taking a side and instead points numbly and ardently at the elephant in the room. It is however most effective as a type of conditioning, in that after watching this movie the traits of people around in stand revealed in their full selfishness/narcissism, denial and manipulative distraction. For that reason, it fits within the metal worldview of seeing our society as a hugbox of denial of its own decline, and the rot coming from within and being masked by — not helped by — the rhetoric of peace, love, equality, subsidy and happiness which is the opiate of our fellow citizens as they zone out and wait to become idiots of the future.