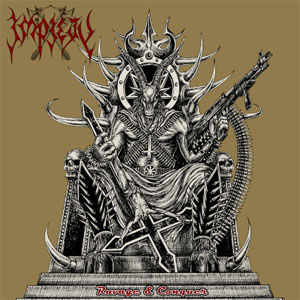 This album is thoroughly enjoyable energetic and simple death metal which incorporates enough hints of melody and harmony to give the songs memorability. However, on the whole it belongs to that category of bands which are guilty pleasure bands by design. They do not aim for profundity, but rather intensity. We might list Vader and Angelcorpse as well, or maybe early Grave, because they have a similar low-tech approach. There is not much that is musical about this release. It is pure rhythm, with the aforementioned musical elements tacked on to keep your interest. But as rhythm, it has the intensity of later Angelcorpse and the raging power of broad basic statements that propelled early Grave. Its songs are not as memorably constructed as those on Exterminate or Into the Grave, have more the intensity of mid-period Vader, but in a time of feeble self-pitying rock bands trying to be hipster “metal,” it’s gratifying to find something with heart. You will tap your feet to these energetic, propulsive tunes and appreciate the sheer violence out of which they are created. Unlike many recent albums which drag you along for the ride, Ravage and Conquer drops you into the middle of it and makes you fight your way out.