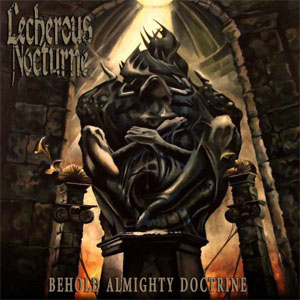 The result is an aural fusillade that withers even the strongest opposition. It is quickly simply designed to pummel the listeners with jagged and abrupt riffing, then lull them into complacency with melody, and then make even those melodies evil and vile.

What makes this band interesting is that despite their newer stylings, they are sticking very much to the old school ideal of music that makes sense, instead of discoordinated riffing designed to distract. Like it or hate it, the result stands apart from the rest by communicating a worldview that is both terrifying and makes you want to participate.

We were lucky to catch up with Lecherous Nocturne guitarist Ethan Lane. We asked him if he’d mind a few questions.

Thank you for your interest.

What made you decide to take this interpretation of blasting death?

Melody and harmony, coupled with meter and rhythm, form the very foundation of any piece of music, and the music of Lecherous Nocturne is no exception. Although the melody can be difficult to pick out in our music, it is actually the driving force behind it and always exists. If you were to isolate any small section of one of our songs, and hear it played by itself, you may be surprised by how melodic it actually is…

Next, another one of the daunting aspects of our music is the complex meter changes/combinations we employ… It may seem like it’s changing all the time (and in fact it usually is…) But a piece of music is a living, breathing thing, constantly growing and developing. We are not a “verse, chorus, verse, bridge, chorus, chorus” band… that constricting formula is not just sickeningly cliche, but inherently can’t fully let music be the art form it truly is. The musical masters of yesteryear always strove to break out of such restrictions and let their music grow, …even such a popular classical piece like Beethoven’s 5th Symphony (that everyone knows the melody to) would never allow itself to become trite in its constrictive complacency — it’s always moving… Sure, themes are revisited, but almost always are they in a different key or presentation. This is found throughout all higher forms of music.

Now, I realize that the unrelenting “blast-beat” is very predominant in our sound, and a common characteristic of many of the traditional schools of death metal (which, we of course are fans of), But also, it may be easy to overlook the very strong black metal aspects of the music as well, which are every bit as predominant. It is the Black/Death marriage which can, if properly employed, really bring out some of the most exciting results… What I would ask of any potential listener of our latest release, is to let the blast beat (in it’s many different incarnations) be a “guide” for your emotions as you absorb the melody… listen “through” the blast beast to the underlying melodic, harmonic & rhythmic realities of the music. When that is achieved, a whole new world is opened up, so much more appreciation is to be found, the break-downs hit so much harder, the blast-beats themselves so much more poignant, the music is punctuated by so much more color…

What would you identify as your primary influences?

This is always a difficult question to answer without just listing a bunch of bands that we like….First and foremost, every one of us is a die-hard metal fan. The music we play is “Metal” (we would never consider our style anything else but metal, and were never ashamed of the term “metal”, as so many were in the 90’s…We of course grew up listening to the classics of many, many genres of metal…

But it goes even further than that. Every one of us is also a serious musician as well, and always looking for ways to further develop that sense of musicianship… Obviously, we’re all influenced by the various schools of black metal, thrash metal & death metal (Trying to name individual bands would be pointless, as the list would go on and on), but in addition to the obvious metal influences, there is so much more… James’ bass technique draws a lot from Jazz playing styles, as does much of the poly-rhythmic work Alex does on the drums. I personally take most of my guidance from classical/romantic piano masters such as Chopin, Rachmaninoff & Beethoven (Those guys were melting face off with some of the most ferocious extreme music ever written, a hundred years before anyone figured out how to distort a guitar or play a blast beat).

And our influences are not all just “musical” ones either. We’ve all been part of this difficult journey called life, and life is indeed one of our primary influences. The feelings of bitterness, frustration, sadness, loss, cynicism, anger & skepticism life elicits … and the desperate need to exorcise these demons from ourselves through this music is perhaps one of the greatest needs we have as artists, and truly one of the most important aspects of doing what we do…. The “Spiritual development”, if you will, of ourselves as individuals, as musicians, and as performers of metal. Hopefully others will take encouragement from this, and be strengthened from it as well.

You’re from South Carolina, which both has a long history of metal bands and isn’t the first place name that comes to mind when we talk about death metal. What is your local scene like? Did you face adversity being in a city with fewer death metal bands?

It’d be more accurate to say that we’re from “The Carolinas” (three-fifths of the band actually lives in North Carolina). And you are certainly are correct in observing that the Carolinas haven’t been the most “nurturing” environment for extreme metal. (despite having quite a long history of metal bands) Yes, It has been extremely difficult to “stay the course” in an area with such little support.

To say we’ve constantly had to face adversity would be a monumental understatement. And that’s not to put down the “local scene” entirely… there have been countless valiant efforts by the local scene to make something out of it, but without that support (that area-wide enthusiasm), it’s easy to simply run out of steam and burn out… it’s really depressing how many great bands have had to call it quits, simply due to a lack of support or encouragement (I know this all too well from my own personal experiences struggling in this scene for well over 10 years).

I consider myself very fortunate to still be doing this. But I’m also aware of how this has turned out to be a blessing in disguise in another aspect. Because of this adversity and lack of support, the “wheat definitely gets separated from the chaff”… In fact, Lecherous Nocturne, as it has turned out to be, wouldn’t even exist without the constant disappointments and frustrations we’ve all had to deal with. It brought us together, strengthened our music, and throughout all of this adversity, we’ve learned to be self-sufficient, to turn to our music and each other to find encouragement and the strength to carry on…And that is a very positive thing.

We are not a “verse, chorus, verse, bridge, chorus, chorus” band… that constricting formula is not just sickeningly cliche, but inherently can’t fully let music be the art form it truly is.

Behold Almighty Doctrine sounds like it has some form of concept behind it. Can you tell us more about this?

Behold Almighty Doctrine isn’t a “concept album” in the traditional sense of the term (with each song telling a defined part of a greater story, lyrically, in “chapters” as it were), but this album in a sense, does tell a story; The story of the frustrations of its own creation. Lyrically, you could say we’re telling the story of our frustrations with life, bitter social commentary on the state of human existence, etc… But I think an even greater story is told in the music itself, without words, for those with ears to hear. I’ve actually been describing that story in little pieces this entire interview. It’s about what we stand for, ideologically & musically; what we get out of these struggles, how we can improve ourselves, and spread this message. This music is our “doctrine”. It’s an answer to the question “Why do we do this?”, a question that the songs themselves answer far better than words.

These songs are like complex mazes of riffs. How do human beings even compose such a thing? Do you use computers or higher mathematics to help you?

The complex nature of the composition and structuring of our songs is truly the heart of Lecherous Nocturne’s music (Aside from an unyielding dedication to the essence of “Metal”, of course…) It is this aspect of our music that is also the most time-consuming… It’s not uncommon for a single 2-minute song to take several months to write. We take great pains to challenge not only the listener but ourselves as musicians with what we write, constantly reworking sections, developing themes and transitions & tying the composition together as a whole in as many subtle ways as possible. In many cases, it takes several listens of a song to really start absorbing much of what has been painstakingly worked into each composition. Regardless of the seemingly chaotic manner of our music, I assure you that each note has been carefully placed, every time change, theme & phrase analyzed and re-analyzed until we feel that the piece has blossomed fully into the carefully constructed work of art we strive for it to be.

How did the band form, and how have you held together a lineup over the past decade?

Lecherous Nocturne was originally formed back in 1997, but there have been numerous lineup changes over the years. What Lecherous Nocturne is at present though, is a culmination of years of tempering. A combining of forces, a living metal entity, a group of people who have decided to keep playing without compromise, in the face of adversity, with little to no support, and a dedication to personal integrity to this music.

Do you think death metal now is stronger than when you started? Do people still listen to “real” death metal?

I’m not sure what people listen to anymore, why they do, or what the “metal scene” even means anymore…. And it’s ironic to me that I’m just as disappointed & disillusioned with the “metal scene” now as I ever was, despite the “resurgence” of the popularity of metal (in general, not just death metal). Honestly, I don’t pay much attention to the metal scene at all. I don’t really have time to, or frankly, much of a desire to.

Lecherous Nocturne, as it has turned out to be, wouldn’t even exist without the constant disappointments and frustrations we’ve all had to deal with. It brought us together, strengthened our music, and throughout all of this adversity, we’ve learned to be self-sufficient

What’s your advice to fans who want to find quality death metal in 2013?

That all depends on what an individual defines as “quality”… is it how many notes you can play? is it “brutality”? is it how shocking your lyrics are? is it on-stage gimmicks? is it how fast you can shred/blast? Of course not. it’s none of that. I believe that true quality comes from a sense of dedication to artistry, intuition, individuality, creativity, and personal integrity to yourself and your craft. I’d start by keeping those characteristics in mind when trying to find something with “quality”. If you can do that, then I think you’re on the right track.

Thank you for taking the time to answer our interview questions.

Thank you once again.