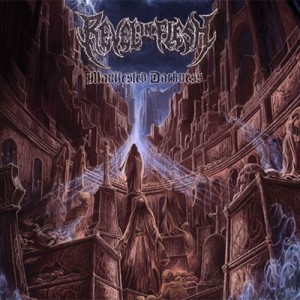 Like many of the newer generation, they combine the heavy metal style melodic Swedish metal with the more hardcore influenced old school death metal which kicked off the movement. The result is easy on the ears like a Motorhead tune, but has all the bass and crunch that an alienated outlaw anti-social metalhead might need.

One thing that’s refreshing about this band is that they are not trying to rehash the past. They’re trying to be a metal band with influences. The result is that this is not first album Entombed. It’s Revel in Flesh, and unlike some of the recent bands, it offers not nostalgia but a current sound of heavy metal style death metal.

We are pleased and excited to, in coordination with Clawhammer PR and Revel in Flesh, offer you this live stream of a song named “Dominate the Rotten” from the new Revel in Flesh album, Manifested Darkness.

For your listening pleasure: