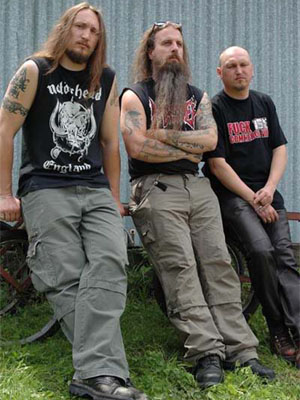 Ever since the opening notes of Death Strike‘s Fuckin’ Death, Master and its related projects have gripped the imagination of the metal community. Simple and direct, the music represented a missing link between punk and death metal.

This year’s The New Elite takes the band more in the direction they took on one of their most popular albums, On the Seventh Day…, which showcased precise playing and rhythmically aggressive songs with more chord changes than a punk band would use. In other words, they moved to modern (now “old school”) death metal.

This was an interesting choice considering the range of the band over the years. Starting in the early 1980s, when Paul Speckmann and others left War Cry to experiment with this new kind of metal, Master, Abomination, Death Strike, Speckmann Project and other bands of this origin have one thing in common: basic, punk style riffs using metallish minor key and chromatic progressions, with influences from blues, rock and hard rock in the fills.

The New Elite made our Best of 2012 list with this review:

Over the past few albums, punk/heavy metal hybrid Master has steadily been migrating toward late-1990s death metal. This new album presents a more technical view than the verse-chorus-exposition songs that Master (and related Speckmann projects) evolved from. Much like On the Seventh Day God Created…Master, riffs are strummed with precision at high speed and tend to lead away from stable grouping by adding riffs to the existing loop. These riffs use longer progressions and more chromatic fills, giving the music a mechanical terror that makes it sound like technocracy taking over. Speckmann’s vocals are tighter than in the past and urge the music along, but somewhere in this musical process of evolution, his overall tone has started sounding less like protest music and more like a cheering of the coming conflagration. Seeing that Master keep improving over time provides a great incentive to follow this band as they evolve further.

Now you can catch Master on tour and appreciate the wizardry behind these manic and often insightful tunes as they tour with Sacrificial Slaughter and Fisthammer on a 32-date jaunt across the USA: