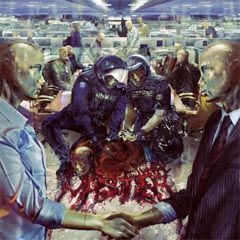 You know, 19 brave people flew planes into the World Trade Center and while I think we should take it seriously, our methods sometimes go too far.

But now, we’re not being brave. We’re busting people for the wrong crap, and not busting enough people who need to go to jail. It’s both deterrent and security theater. I’m sure it works, but what the hell is the point in busting death metal bands from Eastern Europe? Al-Qaeda hates death metal.

The police came to explain that the visa waiver program didn’t apply to musicians. So they sent me to customs and proceeded to tear apart everything and sent me on my way. I waited for six hours to get on another airplane and return to Europe. Thankfully the lady at the Delta checkout counter was very helpful and confirmed that the guys would be on the next plane in the evening and I could return with them. The guys were escorted to the plane by four police officers and returned their passports when we arrived in Amsterdam.

Since when are musicians and terrorists in the same category? Again I apologize to all the bands, organizers and fans of course.

I guess the CD cover of the Human Machine CD has become a reality! – Paul Speckmann, Master

While I think this is ass, and am somewhat upset at the loss of a Master tour, it’s time for metal bands to start querying actual immigration lawyers before making assumptions about how USA visas work. Unfortunately, at this time the process is so complex that you pretty much need an egghead with a law degree to sort it out. Anyway, the Master tour is canceled, we’re all poorer for it, and Al-Qaeda is laughing at our asses while they plan to destroy us with economic terrorism.